Cash receives, rather than gives, Friend of Farmer 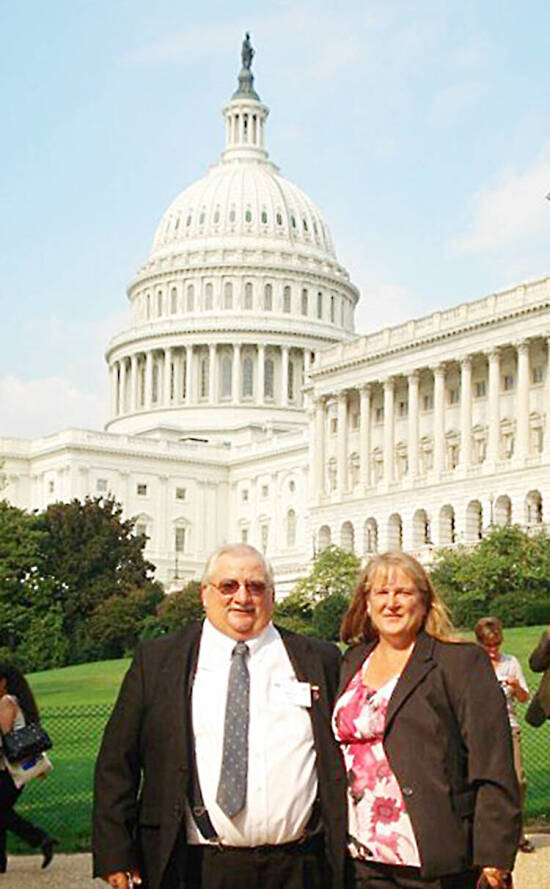 Steve and Patti Cash visit the U.S. Capitol during a trip to Washington, D.C., representing Putnam County and Indiana Farm Bureau. Thanks to involvement with Farm Bureau and a number of educational initiatives, Steve was honored as the 2020 Friend of the Farmer.
Courtesy photo

Looking back, it should have been easy to present Steve Cash with the 2020 Friend of the Farmer Award.

A longtime member of the Putnam County Ag Day Committee, Cash would have been at last year’s event without any pretense.

The only trick was getting someone else to present the award, which Cash has done for years.

And then COVID-19 happened. Putnam County Ag Day, set for Saturday, March 14, 2020, was one of the very first events to get canceled locally.

So Cash didn’t get his award that day.

Then a two-week debacle turned into two months.

Perhaps the awards would be submitted at the Putnam County Fair?

Not so much, as the pandemic has now stretched a full year. It’s only been in the last week that the two 2020 awards were presented.

In hindsight, it’s really something that Cash never found out who the 2020 Friend of the Farmer was to be.

“I’m glad everybody was able to keep it a secret for a whole year,” fellow committee member Jenna Nees said upon presenting the award to Cash recently at the Putnam County Farm Bureau office.

However, getting Cash at that presentation did take some acrobatics. While children Dan, Stacia and Jennifer had known about the award since last year, wife Patti had also been kept in the dark, right up until fellow board members knew there was no other way to get him to the presentation but to tell Patti.

And Steve was genuinely surprised as Nees began listing his accomplishments over the years and board member Heather Poynter moved over to present the plaque.

“I thought, ‘Do I have a twin somewhere?’” he remarked after receiving the award.

“It’s a little bit of a surprise,” he added later. “I appreciate the recognition for what we’ve done.”

That “we” is important as well. While the award bears only his name, Steve and Patti always seem to be a team.

“Congratulations, Steve and Patti too because I have to think you have something to do with it too,” Ag Day Committee member (and 2008 winner) Ken Carrington said. 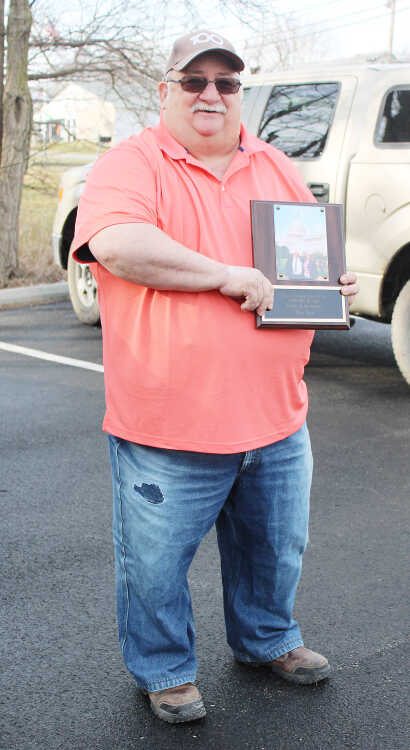 Steve Cash displays his 2020 Friend of the Farmer award, an honor he has presented to so many others in years past.
Banner Graphic/JARED JERNAGAN
Order this photo

Nees talked of how it was a challenge to describe how the 2020 Friend of the Farmer has made an impact in the agricultural community, “not because he hasn’t made an impact, but no one individual knew the full extent to how he has impacted agriculture in Putnam County.”

“Growing up, I remember always seeing him at the fair,” one nominator wrote. “He would help with announcing shows and I believe he was a barn superintendent, was on the fair board and served as an officer. To this day, he still continues to announce events at the Putnam County Fairgrounds.”

But Cash’s contributions go beyond fair week. He’s been a member of Indiana Farm Bureau for almost 40 years and on the board of directors of Putnam County Farm Bureau since 1992, having served as president.

Through this involvement, Cash has been to Washington, D.C., for various leadership events. He also serves as the moderator for the Farm Bureau Legislative Update sessions with local state legislators.

It’s also helped Cash get to know pretty much anyone involved in agriculture in Putnam County, a message he’s tried to get through to new Farm Bureau regional manager Emily Dougherty.

“I tried to get her to understand that I’ve been doing this for 30 years at Farm Bureau and I do know everybody,” Cash said with a laugh. “She’s slowly getting that idea.”

That familiarity has also made passing out the awards all these years that much more rewarding.

“I’ve enjoyed passing it out to those that have won because I know everybody that’s associated with it,” Cash said. “I’ve known them for a long time.”

However, Cash’s involvement with the agricultural community goes beyond Farm Bureau and into education.

Nees outlined how he has taught in several different schools, advised FFA members as they competed at local, state and national competitions and even served on the South Putnam School Board for 23-1/2 years.

“I was brought on the school board in 1992, and we’ve branched out to some other stuff with the (South Putnam Community Education) Foundation,” Cash said. “Any way we can to help the kids keep going in the right direction.”

And, of course, there’s Cash’s longtime association with the Putnam County Fair.

“I think I started on the fair board in 1975 when I got out of Purdue, as the dairy superintendent at that point,” Cash recalled. “I’ve had various positions and what have you after that on the fair board.”

Finally, Cash has been a member of the Putnam County Antique Tractor and Machinery Association, has assisted 4-H members with the dairy project, helped farm families with artificial insemination and at one time operated a dairy farm with his father.

Cash is proud that many of these commitments have been voluntary, not part of his job.

“I always thought it was good when somebody would win this that wasn’t compensated for what they did to win it,” he said. “This has just been an interest of mine in helping the farmers and the kids, and that’s what we’ve done for a long time.”

Like everyone else, the pandemic has changed life for the Cashes, but Steve is happy to have received the award, even if it took a year for the presentation.

“I really appreciate this,” Cash said. “I wish we could have done this down there (at the fairgrounds), but that’s fine.

“I told Heather (Poynter), ‘When the Board of Health is not involved in Ag Day, we’ll have an Ag Day,’” Cash said. “And, regardless, if it’s not ‘Ag Day,’ we’ll do something anyway. If we can do it this summer or do a little bit more at the fair if we have that ability.”

Like others, he’s hopeful to be back to normal by July so that, unlike Ag Day, the fair won’t end up affected for two years.

“Hopefully they can get that OK’d and we can move back with that,” Cash said.