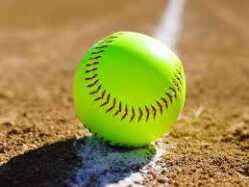 BAINBRIDGE – North Putnam looked good in its opening softball game of the season against Eminence Monday night, right until the final three outs needed to secure the win.

It was in the top of the seventh the Eels finally came alive, scoring four runs to upend the Cougars in a 5-4 loss.

“Our upperclassmen were very excited to be playing,” North Putnam head coach Lee Minton said. “We have no seniors but we are very junior and sophomore-heavy.

“The girls were maybe too excited, I think. Along with that, having coached about 10 years of softball, having your first game the Monday after break is not a good thing.”

The Cougars got on the board in the bottom of the second inning when Kylie Rust and Mackenzie Lawson were hit by pitches to start the inning with Cameron Wolf singling home rust for a 1-0 lead.

More damage was avoided in the inning, however, as Ashlynn Stacks was thrown out advancing to third and a groundout with the bases loaded prevented any more runs from scoring.

Eminence tied the game in the fourth when Sierra Grider singled and later scored on a passed ball.

The Cougars followed up with a run in the fifth as Wolf singled, stole second and scored following a ground out.

Two more runs came in for the hosts during the sixth as Lawson and Kyla Willis drew walks to start the inning, scoring off some misplays by the Eel defense in the next at-bat.

The three-run lead would not be enough in the end, however, as Eminence plated four in the top half of the seventh.

Two singles and a walk set the table for Moley Moxley to plate a pair of runs with a double while Grider grounded out to bring in a third run, tying the game at 4-4.

North Putnam got the next out but Liberty Morris singled to bring Moxley in for a 5-4 lead that held up in the bottom of the seventh.

Brenna Willhite picked up the win in the circle for eminence while Kyndal Brewer took the loss for the home team,

“We only produced five hits against several errors,” Minton said about the loss. “Ninety-nine percent of those errors are losing that year to COVID.

“We have a lot of kids that are adjusting to new positions and getting to know each other on the field. Eminence had a leg up on us there having played three or four games already.”

North Putnam will be in action again next Monday in its first road game of the season at Cascade.

Minton said the loss wasn’t fun but it was important to get the team to see what it was like back out on the field.

“You never want to lose but this will be a building block for us,” Minton said. “We’ve seen what we need to work on and have time to make corrections before our next game next week.”