Cymerman and Edberg to conclude ‘Winter Journey’ with Wednesday concert 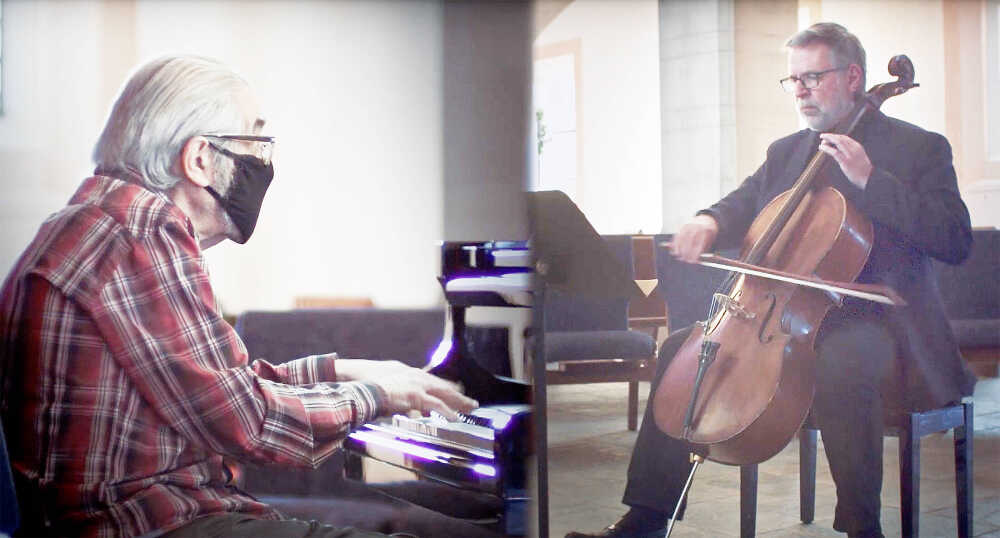 “A Winter Journey Concludes” is the title of Wednesday’s 7:30 p.m. Greencastle Virtual Music Festival concert, which features pianist Claude Cymerman and cellist Eric Edberg’s arrangements of the final seven songs in Franz Schubert’s beloved cycle “Winterreise” (Winter Journey), with Edberg presenting a brief synopsis of the text of each song.

This is the 24th virtual event in the multi-genre series, which next week will feature a special livestreamed concert with Grammy-award winning violinist Mark O’Connor and his wife Maggie, performing from their home in North Carolina, sponsored by the DePauw Performing Arts Series.

Cymerman and Edberg have each had international careers as performers and are emeritus professors at the DePauw University School of Music.

“Transforming these beautiful Schubert songs into instrumental pieces was one of our ‘covid creativity’ projects,” said Edberg, who organizes and hosts each week’s virtual concert. “During the pandemic shutdown, many musicians have found ways to share music online. Sometimes, people have found ways to play with each other from different cities. In our case, we’ve had the good fortune to both still live in Greencastle and have been able to rehearse and record here in Gobin Church.”

The two musical friends had been playing – masked and distanced from each other – in Gobin for their own enjoyment. In September, they recorded a program of short romantic-era pieces as a gift for the family of a close friend of Edberg’s. “From that came the idea of a weekly virtual concert, and this will be our 24th,” Edberg said.

Cymerman and Edberg were audio and video recorded by Matthew Champagne, a former Greencastle resident now based in Bloomington, in one “live-to-tape” session in late January. The 24 pieces, which if played or sung in their entirety would last 80 minutes, and more with narration, have been part of several of the virtual concerts.

“Spring is springing and winter is officially over, so I thought this would be a good week for us to finish sharing these Schubert songs,” Edberg added.

The pre-recorded concert goes “live” at 7:30 p.m. Wednesday and can be heard and see in a watch party with post-concert discussion hosted by Edberg at http://watch.gvmf.live, facebook.com/greencastlevirtualmusic or greencastlemusic.org.

All previous weekly programs are available at http://playlist.gvmf.live.

The Greencastle Virtual Music Festival programs are made possible by the Greencastle Summer Music Festival family of donors and the GSMF endowment at the Putnam County Community Foundation, the Putnam County Convention and Visitors Bureau, the DePauw Performing Arts Series, the Inn at DePauw, the people of Gobin Church, and in partnership with the Sunny Side concert series.

Contributions, which provide income for musicians impacted by the pandemic shutdown of live performances, can be made at greencastlemusic.org/donate.