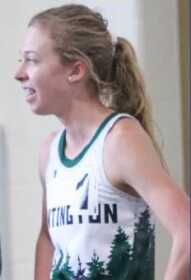 HUNTINGTON – The U.S. Track & Field and Cross Country Coaches Association (USTFCCCA) announced its regional Athletes and Coaches of the Year for the 2020 NAIA Cross Country season and among the list were sophomore Emma Wilson and Head Coach Lauren Davenport Johnson.

Wilson, who heads into the 2020 NAIA Cross Country Championships on Friday as the No. 1 seed, was tabbed the Great Lakes Region Athlete of the Year. She is undefeated with her most recent victory coming at the Crossroads League Championships where she clocked in at 16:40.3 which proved not only a new course record and meet record but remains the women’s fastest collegiate 5K time nationally across all divisions this year.

The Greencastle native also won individual titles at the Taylor Midwest Challenge, the NAIA Seminole Valley Stampede, the Indiana Wesleyan Twilight Classic and HU’s own invitational in addition to setting new course records at each stop.

The USTFCCCA awards this honor to five females across the country based on region. Other regional winners include Laisha Corona of St. Francis (Ill.) (Midwest), Julia Rohm of Southeaster (South), Allika Pearson of John Brown (South Central) and Faith Widman of Oregon Tech (West).

Wilson and crew, ranked 7th in final national poll, received an at-large berth to the NAIA National Championships slated for April 9 in Cedar Rapids, Iowa. This is the Foresters’ second straight appearance at the big dance with last year’s team finishing 10th - the highest finish in program history.