No shame, no blame and no names

“This box offers no shame, no blame and no names,” program founder Monica Kelsey said.

That was the idea when Kelsey, a firefighter and paramedic, founded the Safe Haven Baby Box in 2015. The focus is on providing a safe and judgment-free place for new parents to surrender an infant up to 30 days old.

With the new box installed and blessed at Putnam County EMS, 513 Bloomington St., Greencastle, new parents in Putnam County have the same opportunity as those in 64 other communities where such boxes were already installed in EMS or fire stations. 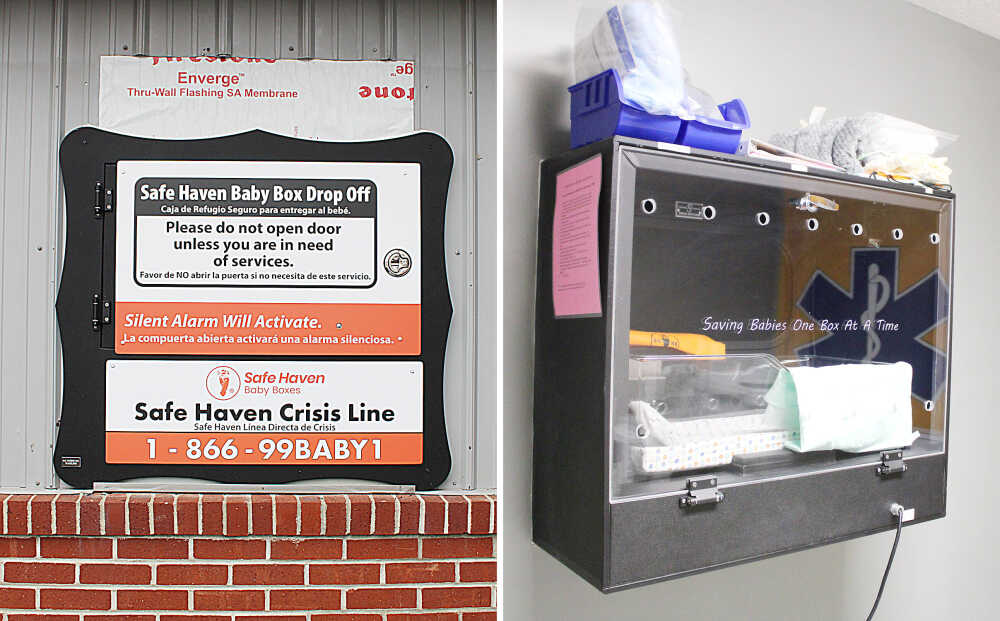 The outside of Putnam County's Safe Haven Baby Box, now installed at Putnam County EMS, 513 Bloomington St. Greencastle, offers parents of infants a safe and secure place to surrender their children. Meanwhile, inside the box is outfitted with supplies for EMS employees to care for a baby.
Banner Graphic/JARED JERNAGAN
Order this photo

“It is a great day to be in Putnam County,” Kelsey said. “Women now have a last resort option.”

The box is located on the west side of the building, facing Bloomington Street, on the outside of the narrow hallway that connects what once were two buildings.

The Safe Haven Baby Box provides a secure and climate-controlled environment for the surrendered infant. It opens directly into the Putnam County EMS headquarters. Additionally, when the door closes, Putnam County Dispatch is immediately notified so that first responders can be dispatched to the scene, should EMS personnel not be in the station.

Kelsey told her own story, which began when a 17-year-old was raped and impregnated. The teen later chose to walk out of a back-alley abortion clinic — as this was before Roe vs. Wade — and have her baby, only to abandon the little girl a few hours later.

The little girl was Monica Kelsey, who now wants to give children a different opportunity than she had.

With Safe Haven Laws that allow parents the right to surrender and children the right to life, these boxes have been installed in Indiana and four other states.

“I didn’t deserve the death penalty for the crime of my biological father,” Kelsey said. “I stand on the front lines of this movement today, taking my pain and turning it into purpose.”

EMS Chief Kelly Russ brought the Safe Haven program to Putnam County, and she praised those who helped make it possible.

“This box was a glimmer of hope for me last year when I started my career at Putnam County EMS,” Russ said. “And it was made possible by 100 percent philanthropic donations, not only monetary value but also building materials, labor and landscaping services from the citizens of Putnam County and the surrounding area.

“Putnam County, this is here because of your amazing community and its members.”

Illustrating this point, a banner listed the various contributors to the project, including contractors Kevin Petty from Petty Home Projects, Bill Mentgen from Energy Conservation Solutions, Gary Stevens from S5 Security Solutions and Cox’s Plant Farm, all of which donated time, materials and equipment for the installation of the box.

Russ explained after the presentation that funding such a project completely through donations is not the norm.

“It’s been a total grassroots effort,” Russ said. “Most departments end up writing a check, so the fact that this is 100 percent philanthropic is amazing."

Herself a “bonus mom” who’s been raising non-biological children for 18 years, Russ read an adapted version of the poem “Legacy of an Adopted Child” before sharing some of her own thoughts on parenthood.

“Parenthood is about choices, whether you are the biological ones, the adopted ones or the bonus ones,” Russ said. “I just hope that any woman or man who knows about our box, and feels like they have no other choice, knows that this is always a resource in their community.” 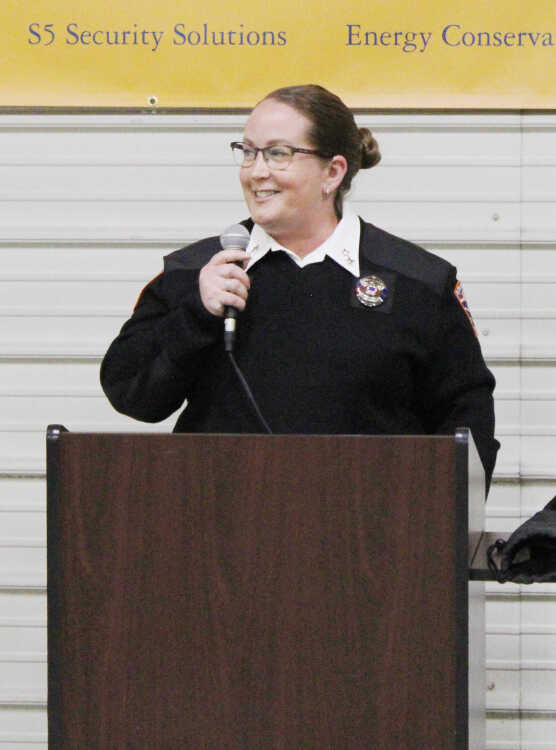 For his part, Commissioner Rick Woodall said the box is simply an extension of the service the county wanted to give its residents when it took over the struggling Operation Life and transformed it into Putnam County EMS.

“When Kelly came to us and asked about the baby box, it was absolutely a no-brainer,” Woodall said. “It’s just another piece of the puzzle of our county and how we want to provide for our constituents and provide everything we possibly can. And to give a new start to a child is one of the greatest.”

Linda Znachko of He Knows Your Name Ministries spoke a bit about her program, which provides proper burial for abandoned babies who don’t survive. Having seen abandonment, she explained how surrender is different.

“Abandonment is illegal. Safe surrender is legal,” Znachko said. “We have to realize that abandonment usually ends up in death and it’s criminal. And it’s not only the death of a baby but it’s imprisonment for a mother.

“Abandonment is not what this is,” she added. “It’s a safe surrender — it brings forth life.”

Gobin Church Pastor Brian Langdoc ended the service with a prayer of blessing for the box and the Safe Haven effort overall. He regretted Tuesday morning’s rain, which prevented him from standing directly in front of the box.

“After this, I’m going to stand in the rain,” Langdoc said. “I know God can do it from here, but I’d like to go touch that box.”