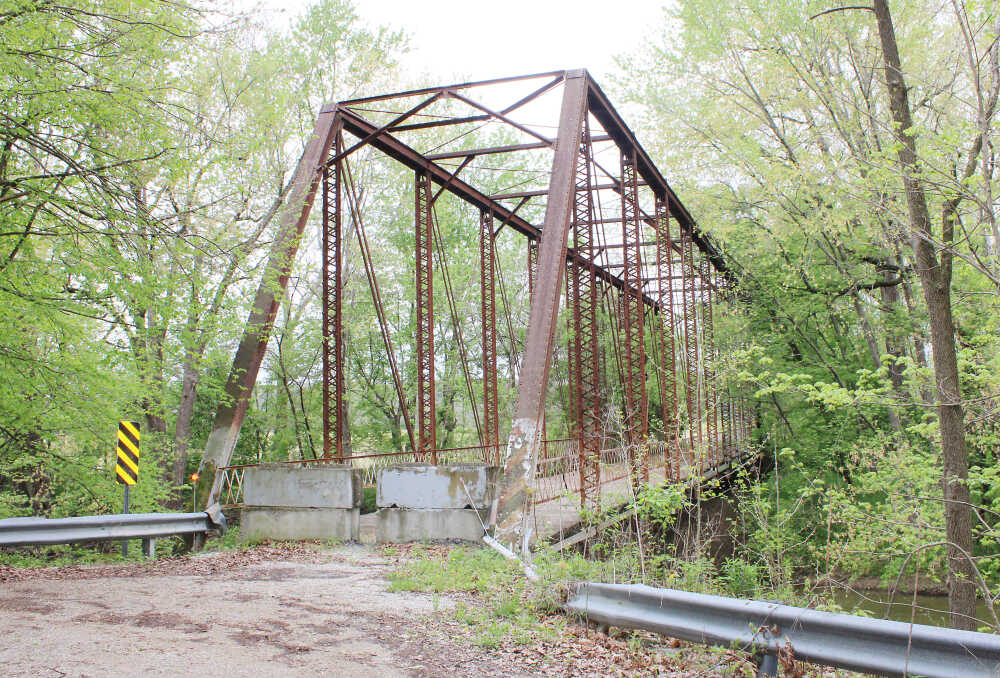 Closed since 2006, Pinhook Bridge in Greencastle Township is a proposed part of the route of the Dust Bowl 100 bike race, set for Saturday, July 24.
Banner Graphic/JARED JERNAGAN

Pinhook Bridge has been closed to vehicular traffic since 2006.

In that 15 years, it hasn’t garnered much attention. Sure, it’s one less way to cross Big Walnut Creek, but the replacement downstream of both Crowe’s Bridge and Houck Iron Bridge have provided modern, two-lane alternatives to the one-lane, iron-frame crossings like Pinhook.

And so Pinhook sits, aging in the same spot it used to carry County Road 25 North traffic across Big Walnut Creek in northeastern Greencastle Township.

A proposal brought forth in February, though, has the bridge back in the crosshairs of county officials.

Back in February, cyclist Marc O’Leary of Elevate Endurance LLC brought forth a proposal of a 100-mile bike race, the Dust Bowl 100.

While the race is set to begin and end in Eminence, in between, nearly all of the miles logged will be in Putnam County, most of them on gravel roads.

The one problem County Attorney Jim Ensley saw with the original proposal was one particular point on the route — the crossing of Big Walnut via Pinhook Bridge.

In the time since, Ensley has researched the topic and consulted with the county’s insurance provider regarding the possibility of bikes crossing the 108-year-old through-truss bridge.

And the answer is … inconclusive.

While an insurance company is always guarding against liability, the advice Ensley was ultimately given was if the bridge inspectors are OK with it, then the county is safe.

And if it’s not even OK for bike traffic, the county has a bigger problem on its hands.

“If it’s that big of a liability, you need to take it out,” Ensley said.

Fortunately, Shari Hinds-O’Riley of USI, the county’s bridge inspection contractor, was present at Monday’s meeting. She said the bridge could be inspected, along with the other inspections performed for the county, at no extra charge.

While removing the bridge wouldn’t be a deal breaker for the race, O’Leary certainly hopes the bridge can be included in the route.

“Adding the bridge to the route adds character to the ride. We can reroute it, but it would take out an iconic feature,” O’Leary said. “I’ve been in some gravel bike races, and two of them have had closed bridges like this. That has been the iconic feature of the race.”

He even noted the two concrete barriers currently blocking the entrance to the bridge, saying that lifting the bike over the obstacle is all part of the fun.

Bridge or no bridge, the decision should be made in plenty of time for the Saturday, July 24 race.

The Dusty Bowl 100 wasn’t the only two-wheeled excursion on Monday’s agenda, as the Commissioners also heard from Beth Krampe of Krambo’s Motorcycle Service and Painting, which will host its 12th annual scavenger hunt fundraiser on Saturday, June 12.

For the race, the Krampes always request the morning closure of County Road 445 West just south of U.S. 40 in Manhattan.

Last year, the event raised $18,000, most of which went to Andrew Smith, an area man who was paralized in a tree trimming accident.

This year, the funds will go to the families of a 10-year-old and an infant, both of whom are facing serious health concerns.

Krampe noted that while it is an event centered on motorcycles, they have in recent years opened it to those in other vehicles interested in a good time and making a difference.

The Commissioners unanimously approved the closure.

• Commissioner President Rick Woodall discussed the ongoing lack of guidance from the federal government on how to use the $7.2 million in American Rescue Plan money the county will soon begin receiving.

“There will be people lining up for this, as we just got a presentation from Reelsville Water,” Woodall said.

That presentation came from Krampe, who is also a member of the Reelsville Water Authority board.

She noted that while the authority’s wells are still functioning, there are signs that the wells will need to be replaced years from now, a project that promises to be quite pricey.

For now, the Commissioners asked Auditor Kristina Alexander to create a new fund for the money, half of which will be arriving soon.

“We will have more than $3 million sitting in a bank that we can’t do anything with,” Woodall said.

During an upcoming meeting, the Commissioners will have to pass an ordinance on how the money will be handled.

The county will have until December 2024 to spend the money. Woodall is hoping to get guidance on whether the money can be invested so that it might earn interest until it is spent.

• The Commissioners gave approval to proceeding with a plan for Metronet to place a new transmitter for wireless service on the courthouse radio tower.

Bonnie DuPlessis of Metronet noted that Greencastle was the first city the all-fiber communications company served back in 2005. She said Metronet is now trying to move forward with its local service.

The installation is for a wireless trial Metronet plans to perform.

The citizens broadband radio service spectrum would be an expansion of the service currently provided to Metronet customers in their homes.

“It’s in addition to the technology we currently use,” DuPlessis said. “This would allow you to use more of our services outside of your current home or business.”

The small box would only be a temporary installation in the summer or fall of this year to begin with.

The plan is to place such boxes elsewhere in the city, as the transmission range is expected to be one or two miles.

“As you know, technology is always evolving, so how can we say no?” Woodall asked.

While further details have to be worked out, the Commissioners gave approval to proceeding.

• A group of residents of County Road 50 West, on either side of State Road 236 in Franklin Township, came to ask the Commissioners about the possibility of chipping and sealing their road.

The group, led by Timothy Reffett, told of extremely dusty conditions as well as rough road.

“Recently, after new rock was applied and the road was graded, it was so dusty you couldn’t even see your neighbor’s house,” Reffett said.

Reffett and the others also noted the limited effectiveness of putting road oil down, saying it lasted no more than a month.

The Commissioners explained that with the difficulty the county already has in maintaining its paved roads, there are no plans to pave any new roads.

They did, however, float the possibility of the residents paying to chip and seal the road, a process that comes at a cost of $42,712 according to County Highway Supervisor Mike Ricketts.

“I do understand what you’re saying,” Woodall said. “I understand that living on a gravel road is not the best, as we have 243 miles of gravel road in this county. We will try and maintain it the best we can. Mr. Ricketts will put together a proposal and you folks can get together and decide how to pay for it.”

• The Commissioner discussed changes to the road oil program this year.

The county will again be partnering with Loren Hoopengarner, who will apply the oil for interested residents.

However, noting high demand for the program, the Commissioners wish to pay a lower portion of the cost-share program this year so that more residents can be served.

Previously, the county set aside $15,000 and paid a 50-50 split with as many residents as possible on a first-come, first-served basis.

With the county wanting to pay less, Hoopengarner lowered his price this year out of concern for his customers. The cost is now $300 for 300 feet, down from $330 in recent years.

That will allow the county to partner with residents on 150 different 300-foot strips.

The plan, as approved unanimously on Monday, is the county will pay one-third of the cost.

• Another road issue before the Commissioners was the formal acceptance of the $1.253 million bid from Milestone to perform the county’s Community Crossings work.

The approval was a formality, as the county had already expressed interest in the bid, but had to await official word of the $1 million grant from the state, which came last week.

• Ricketts also told the Commissioners of a request from a landowner to close a road that dead ends at a closed bridge in Floyd Township.

Bridge 71 was closed in 2019, rendering the three quarters of a mile of County Road 500 East on which it sits all but useless, except to farmers with land off the road.

However, an area landowner has noticed cars parking down the now desolate road and partaking in elicit activities.

The resident proposed to Ricketts the installation of a gate at the south end of the road at his own expense and giving keys to only the Highway Department and those who need access for farming purposes.

The gate would be removed if the bridge is replaced.

“Until we finish all our federal aid projects, I don’t foresee replacing it,” Ricketts said.

The Commissioners approved the plan, pending approval from the county’s insurance company.

• The Commissioners noted they still need to make an appointment to the Cemetery Board to replace Steve Fenwick.