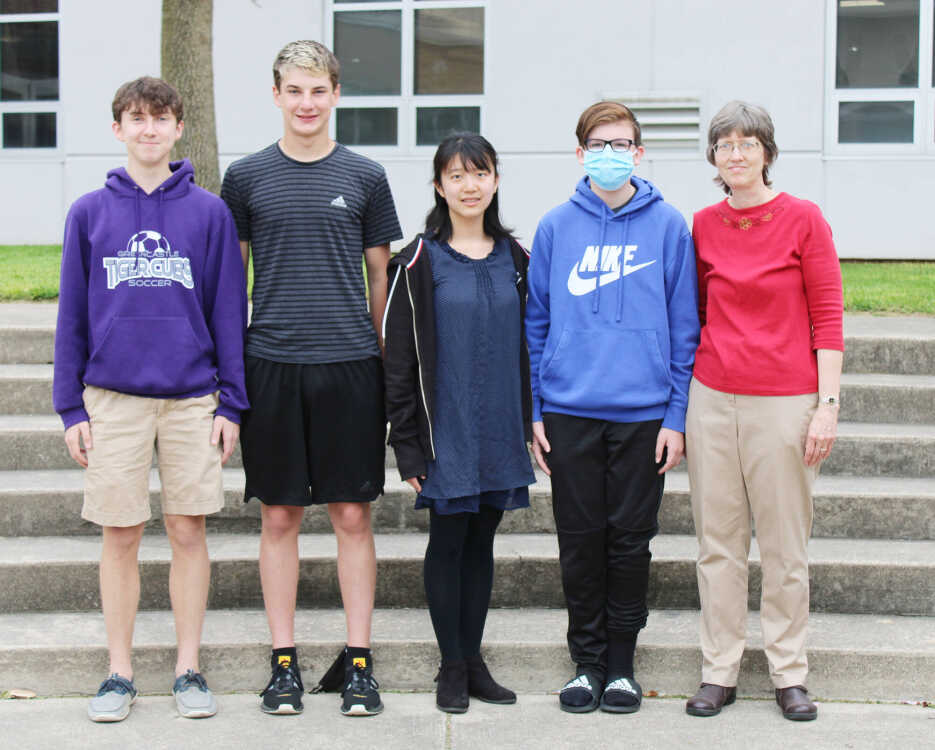 The top seed headed to the state finals ... a record number of teams for one local school ... two all-female teams … a successful challenge to get an answer reverse.

As six teams Putnam County head to the 2021 Academic Super Bowl State Finals on Monday, May 10, there is no shortage of interesting storylines.

None represents a bigger departure from normal than the virtual nature of this year’s competition.

Not only did all teams around the state compete from the confines of their own school buildings in the regional competition, but they’ll do the same on Monday, rather than venturing to Purdue University for a Saturday in-person event.

The strangeness of the competition wasn’t lost on any of the teams, though they noticed different effects in discussing the matter.

With another coach noting that it was nice to be able to hear the teams talking through the problems, Hansen added, “They liked that they could talk out loud.”

It definitely worked to the advantage of Hansen’s team — composed of Casey Crary, Stephen Dombrowski, Ben Huff, Eihi Yoshinaya and Mason Howard — as it finished with a score of 24 out of 25, which set the pace for all Class 3 math teams.

If the top seed didn’t put enough of a target on Greencastle’s back, there’s also the fact that it’s the two-time defending state champion in math.

“We are trying to repeat because we won in 2018 and 2019,” Hansen said. “And last year was the weird year when we didn’t have any team competitions.” 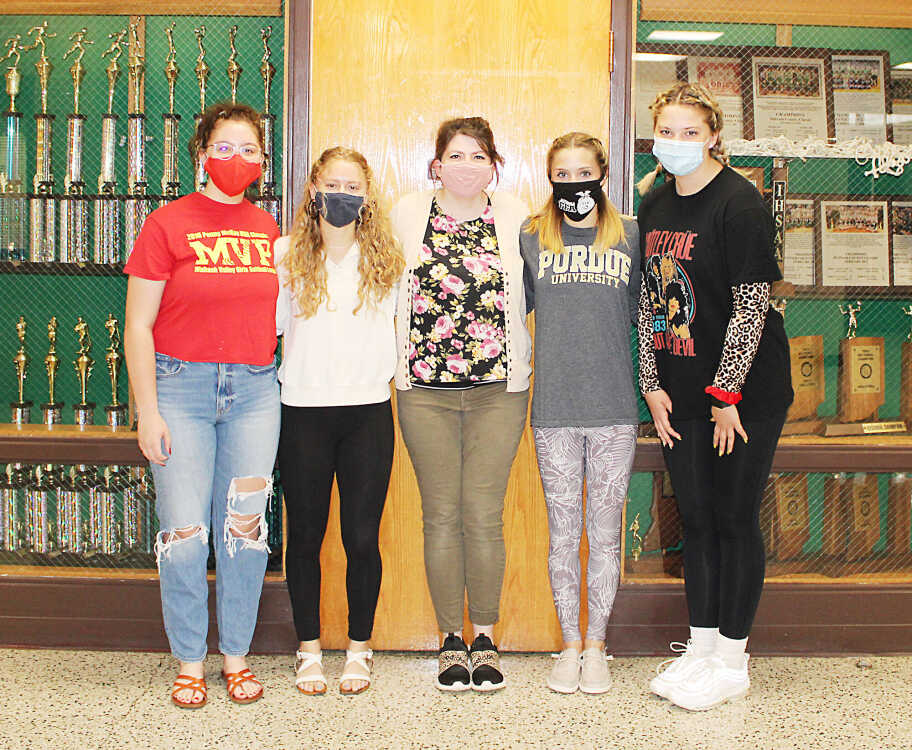 A group of women excited to learn about the female artists and musicians of the last century, the Cloverdale fine arts team turned that energy into a state finals berth with the sixth-best score in the state. The team includes (from left) Phoebe McDonald, Lily Monnett, coach Chelsey Meluch, Sadie Priest and Ruthie Mann.
Banner Graphic/JARED JERNAGAN

Another coach noted how her team also enjoyed the difference of competing away from the crowds, Cloverdale’s Chelsey Meluch, who heads up the fine arts team.

“That made us a little nervous because we’d never done it before, but I think they relaxed because they didn’t have the intense pressure of everyone staring at them,” Meluch said. “They just slowed down and did really well.”

It also represents one of two all-female teams in the county, groups of young ladies who are excited to represent their school for this year’s theme commemorating a century of women’s suffrage: “The American Woman: 1920-2020.”

“They were really excited about the material,” Meluch said. “They liked that it was ‘The Year of the Woman.’ I think that made it more relevant.”

Meluch also noted that none of her team members specializes in visual art or music.

They’re like their coach in this respect, as Meluch is a biology teacher who formerly also taught agriculture. 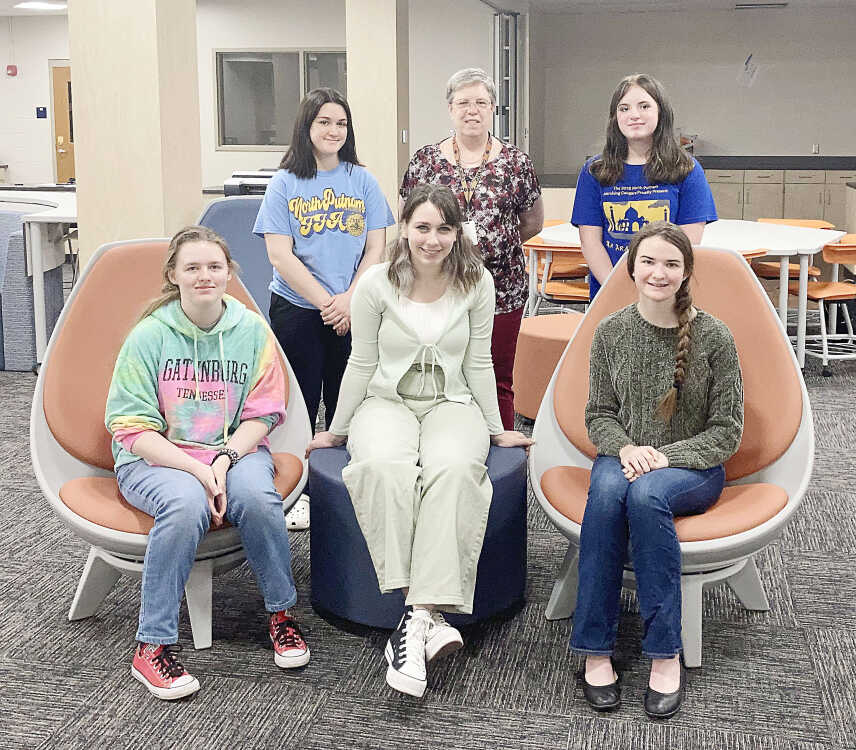 Another all-girl squad is also headed for state, the North Putnam English team, whose 24 points placed third in Class 3 on a tiebreaker. The team is composed of Grace Timm, Nicole Huffman, Lily Gaddis, Breanna Richardson and Ruby Sullivan.

“It’s been interesting to learn about these women and what they’ve done,” coach Monique Fields said.

But while studying female authors may have been a nice bonus, this team was motivated early on by a desire to make their mark after last year’s digital, all-individual competition.

“They said at the beginning of the year, ‘Can we start earlier?’” Fields recalled. “They wanted to jump on things right away.”

The coach told them she’d be happy to start early, as soon as she knew the content — which wound up including a novel, a play, four short stories and five poems.

Fields gives a lot of credit to the leadership of her lone senior.

“My leader is my senior, Grace Timm,” Fields said. “She’s been on my English team since her freshman year. So I automatically made her my captain. They work really well together and I’m going to really miss her when she goes off to college next fall.”

North’s journey to the state finals not only included a good score, but improving upon it by successfully challenging a question.

“We got a 23 out of 25, which I was thrilled with. And they said, ‘You know what? We want to challenge that. We’re sure that’s the right answer.”

Fields told them that was fine, but left it up to the team to make its own challenge argument.

“They can always say, ‘We don’t agree with your interpretation,’” Fields advised them. “But Thursday afternoon when the results came, they accepted the challenge.”

“That was like the dot on the i, the icing,” Fields said. “It made our advancement even sweeter.” 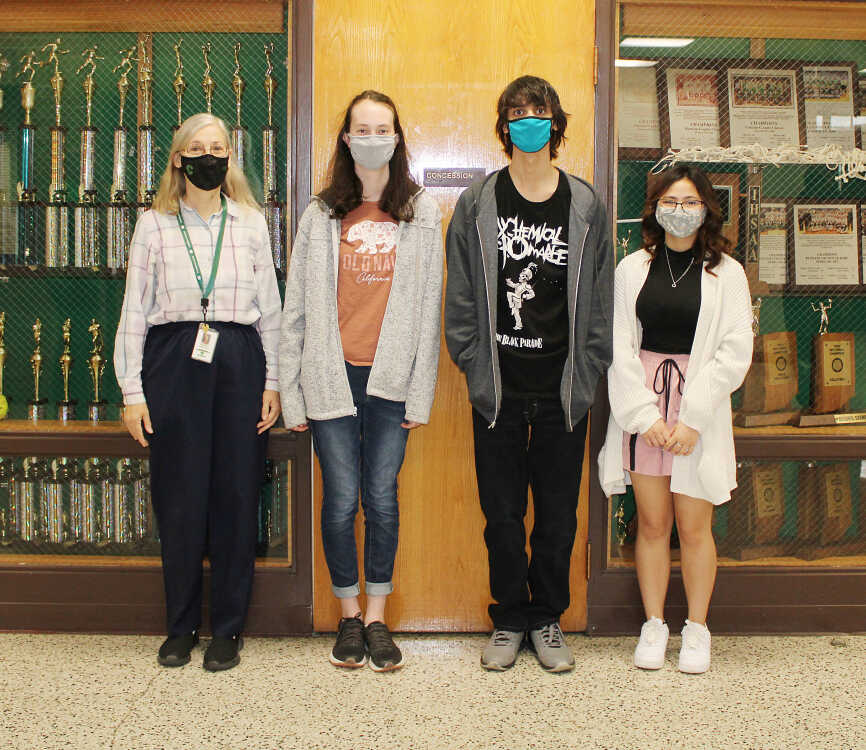 A team that used every day given to it to prepare for the Academic Super Bowl regional competition, the Cloverdale science team has continued its preparations ahead of Monday’s state finals. Team members are (from left) coach Kathryn Hoffmann, Emma Paauwe, Christopher Benitez and DeeLaynee Lauer.
Banner Graphic/JARED JERNAGAN

One other aspect of the year for a number of teams was the possibility of COVID-19 and with it, the possibility of team members or entire schools missing time during the preparation period. Fields noted her own team was unable to meet in person for several weeks, as a COVID closure fed right into Christmas.

In place of in-person meetings, the team met via Google Meet.

“It was hard,” Hoffmann said. “We were out for some weeks so it was hard to prepare.”

Still, the team managed to put up the second-best score in Class 4 with 22 points.

Hoffmann said they used every possible moment, though, as she and a team member figured out a different approach to a challenging question on the day of the competition.

“And it worked,” she said. “We were training until the last minute. I would put up resources for them and they would work on it.”

One worry Hoffmann said her students had heading into the competition was the possibility of cheating with no centralized competition space, “but it looks like nobody did.”

She also expressed her pride in the school’s Academic Super Bowl program overall, as Cloverdale advanced a school-record three teams this year.

“What I’m proud of is in 2019, one team went and this year three teams went, so it went better and better,” Hoffmann said. 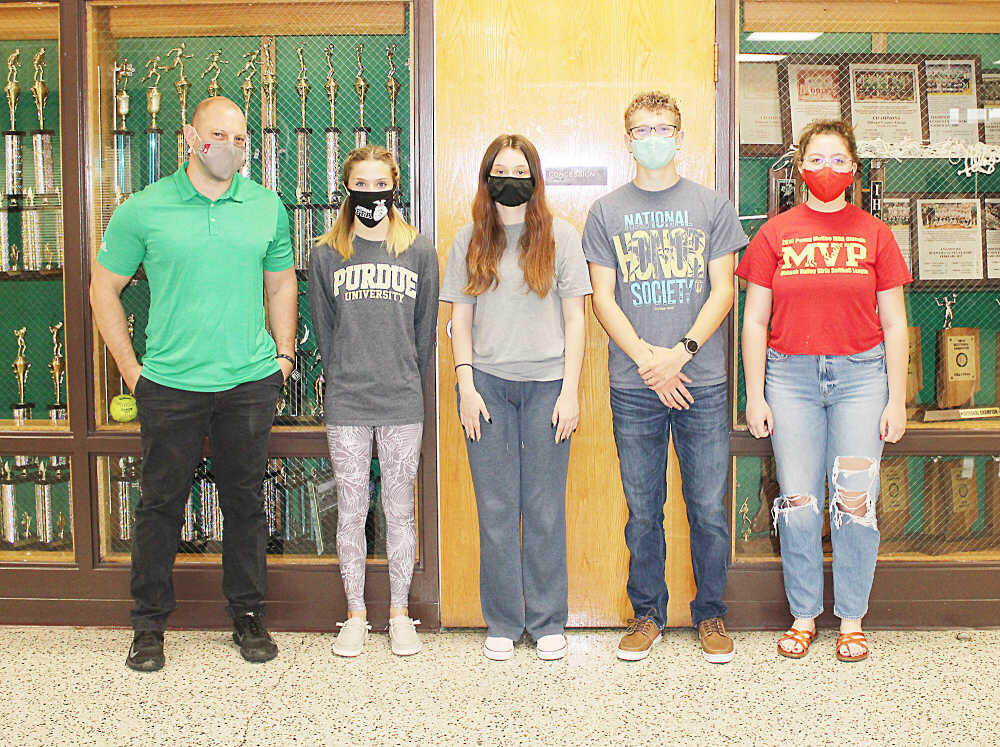 Joining science and fine arts in the finals is the Cloverdale math team, which had the fifth-best score in Class 4 with 13 points.

“This group of students that is competing this year is one of the strongest groups I have had in my five years as the math Academic Super Bowl coach,” Walter said. “Their knowledge as well as some pretty interesting math content in this year’s competition have made this group very fun to work with and also very successful.” 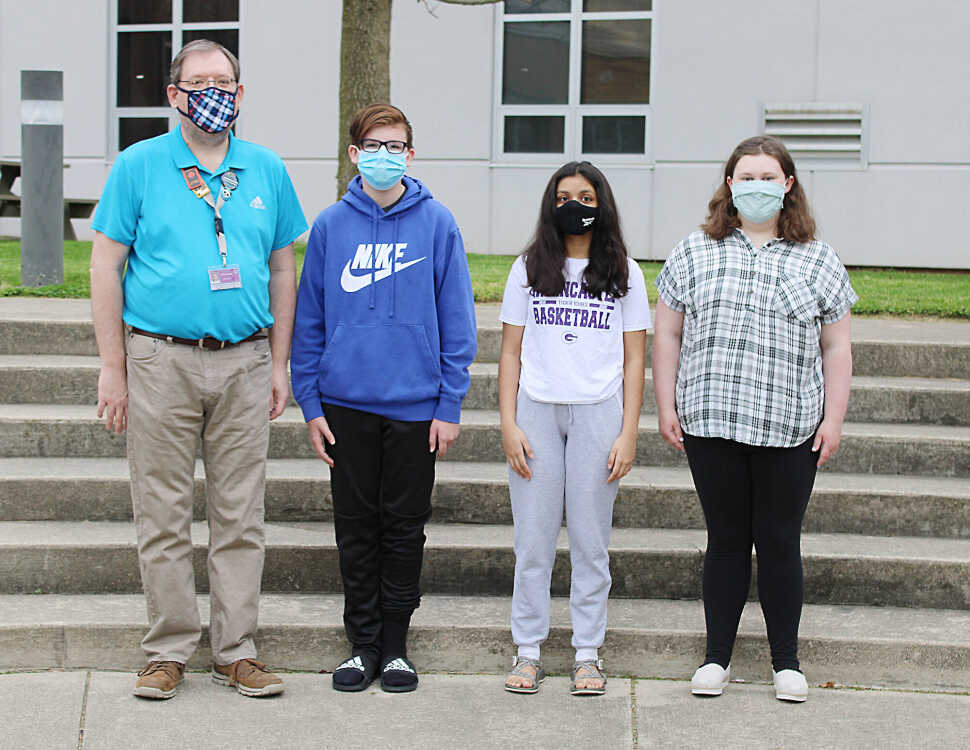 Having tied for the best Class 3 science score in the state, the Greencastle science team ultimately placed third in the regional round of Academic Super Bowl. The team heading for the state finals includes (from left) coach Brad Kingma, Mason Howard, Maiesha Rashid, Bailey Williams and (not pictured) Casey Crary.
Banner Graphic/JARED JERNAGAN

Brad Kingma, coach of the Greencastle science team, also noted this year’s content, which he said was especially challenging. The challenges posed by COVID only added to this.

“I was really pleased they were able to focus with everything going on,” Kingma said. “We did quite a bit in a short period, but they really worked hard.”

Kingma actually said his team — composed of Bailey Williams, Mason Howard, Maiesha Rashid and Casey Crary — may have benefited from the later start they got to preparing.

“It’s possible that starting later helped us because you didn’t get done two months early and then review,” Kingma said.

It’s hard to argue with the team’s results, as its 23 points tied for top Class 3 score, though a tie-breaker placed them third.

Then again, Hansen said her team started early and they’re the top seed.

Perhaps we can mark it down to experience for a Greencastle program that has won 29 state titles in Academic Super Bowl, one more than second-best West Lafayette.

“We’ve learned all the material, it just leaves what we’re weaker at,” Kingma said.

“But you don’t want to forget the ones you get right,” Hansen added.

“You have to understand there might be changes,” Kingma said, “and anticipate what’s coming.”

“The questions are harder, so I try to make the questions I ask the kids harder,” Hansen concluded.

And win or lose, some of the kids are already thinking about next year.

“They’re all ready for next year,” Fields said of her group that graduates just one. “They’re an awesome group and I’m so proud to be their coach.”