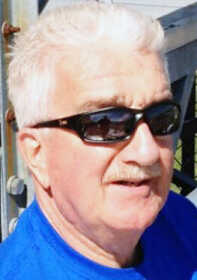 He married Maria Tracy and she survives. Vince graduated from Fillmore High School in 1958.

His parents, daughter Kristy Pennington and brothers Steven and Richard Kiger preceded him.

He was in the Army from 1961-63 which he reflected on as some of the best years of his life.

He and Maria owned and operated Kiger Sunoco in Danville from 1971 to 1998 and worked side by side, raising their children to appreciate hard work. Through those years Vince was a staple of the town and a friend to so many. With his kindness for all and his giving spirit he made many lifelong friends.

Part of his legacy was that he impacted the lives of the younger generations of Danville in many ways by offering his time, his knowledge and the freedom to “hang out” at the station after hours. He took pride in being able to offer a safe, fun place to grow up and hang out.

If you saw him out and about, more than likely he would be wearing a Danny Smith racing shirt. He was an avid race fan and along with sponsoring countless race teams throughout the years, he volunteered his time annually at the Ford Wilson Race of Champions.

When Vince wasn’t at a race track, you could find him volunteering at his church, spending time with his family and telling countless stories.

His love for God and his family was never doubted throughout his 56 years of marriage to his best friend and true love Maria.

Even though his family and community would have loved many more years with Vince, we are at peace knowing he is at home with the Lord.

Services will be at 2 p.m. Friday, May 14 at Calvary Chapel of Danville with calling there from 10 a.m. until time of service. Burial with military honors will be in Danville South Cemetery.

Arrangements are being handled by Bousley Funeral Home, Coatesville.

In lieu of flowers, memorial contribution may be made to his favorite mission in Haiti: Mountain Top Ministries. P.O. Box 7053, Terre Haute, IN 47802. www.bousleyfuneralhome.com