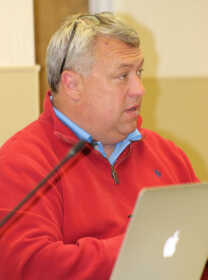 CLOVERDALE — Even with thousands of dollars in stimulus funds coming, town leaders in Cloverdale are conscious about getting the most for the money when it comes to water improvements.

Town Manager Jason Hartman outlined how the town could secure and utilize funding for these improvements during the Cloverdale Town Council’s regular meeting Tuesday evening.

Hartman first told the council that the Indiana Department of Environmental Management had recently inspected the town’s sewer plant. While the town was not fined, he noted that improvements were needed at the plant.

Hartman said he had recently been in contact with Curry & Associates about different types of funding which could go toward wastewater improvements. He referenced ongoing inflow and infiltration (I-and-I) problems in the town.

Hartman discussed the prospect of drawing up a preliminary engineering report (PER) to address these issues, as well as what grant sources would be available to help cover its $40,000 cost.

The town could pursue a Community Development Block Grant through the Office of Community and Rural Affairs (OCRA) next year, in which it would have to come up with $700,000 for a million-dollar project. A full PER would be required for both OCRA and rural development money though the U.S. Department of Agriculture.

However, the passage of a $2 trillion infrastructure bill now being debated in Washington, D.C., could open more doors.

As such, Hartman added, the State Revolving Fund would receive more money and be looking for projects like Cloverdale’s. However, this one has to be “shovel-ready.”

Money granted to Cloverdale through the American Rescue Plan Act — $450,000 divided in two installments — could be used to covered the full PER being related to a water project. However, the PER would also count as local match with OCRA.

Hartman estimated that the town had $250,000 worth in repairs and updates. These include replacing a fine screen and a blower at the sewer plant, as well as fixing damage on a tank there. He also referenced potential I-and-I issues around Doe Creek.

Hartman recommended that the council meet with different engineering firms, to which it agreed on interviewing about four. The council decided to hold a special meeting on Thursday, May 20 at 6:30 p.m.

• The council approved the purchase of a machine that can accept credit cards for purchasing bulk water. Hartman said the current system provider no longer provides electronic cards which have been purchased and received at the town office. The cost was $1,600.

Customers who use credit cards now pay a convenience fee of around $3. Bulk water, meanwhile, was said to be around a penny a gallon. Hartman suggested that rates only for bulk water be adjusted in the future, including deciding whether the fee should apply to each transaction.

• The council approved a resolution for the town to take over the water, sewer and street infrastructure of the Whispering Winds subdivision. In essence, this was acknowledging that the infrastructure had been inspected and would become the town’s property.

Renewal for the town’s employee health insurance is due around July 1.

• The council approved to use auctioneer Jeff Rich to sell a tractor, a dump truck and a truck that does not run as surplus for the town.

• Hartman announced that a contract had been signed with Plant Brothers Excavating to begin installing a grinder lift station and force main on Blue Side Way. He said boring or digging and putting pipe in the ground would be under way next week.

• The council approved hiring Civic Blueprint to look at the town’s zoning ordinance. Hartman said he “did not have a whole lot of confidence” in the ordinance, in that he believed there were discrepancies that needed addressed.