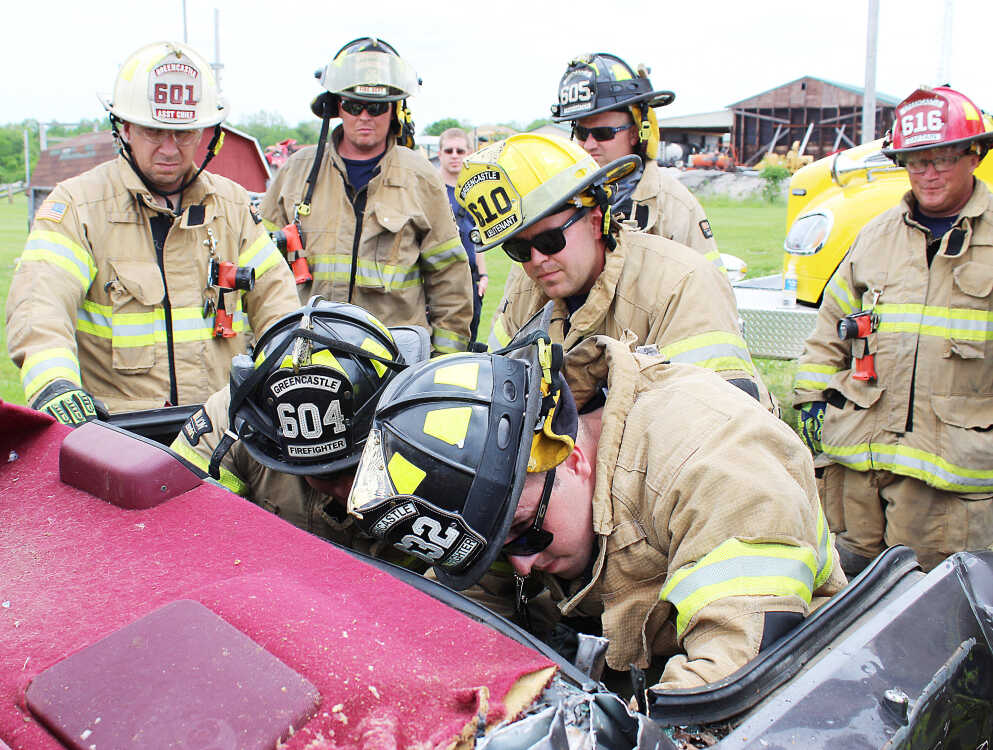 Captain Kyle App has been with the Greencastle Fire Department for nearly the past two decades. Even with having all of this experience, though, learning how to be a more effective first responder never stops.

This was certainly the case last Saturday and Sunday as App was one of several firefighters from GFD and other local fire departments who got some hands-on experience to complete a Vehicle Rescue Operations (VRO) course.

With both classroom and practical training, the course teaches fire personnel how to work safely at incidents with people injured and/or entrapped in a wrecked vehicle. It emphasizes techniques and procedures to stabilize the vehicle and secure the scene, as well as protecting the patient during an extrication.

Firefighters went out to the fire training site southwest of Greencastle to practice those techniques. They were then tested on the practical skills and also took an online test.

The training was led by District 7 Fire Training instructor Jon Shackelford, who is also the battalion chief and training officer for the Honey Creek Fire Department. He was backed up by Terre Haute Fire Capt. Doug Curry as lead evaluator and Brazil Fire Capt. Roy Keller as an assistant. 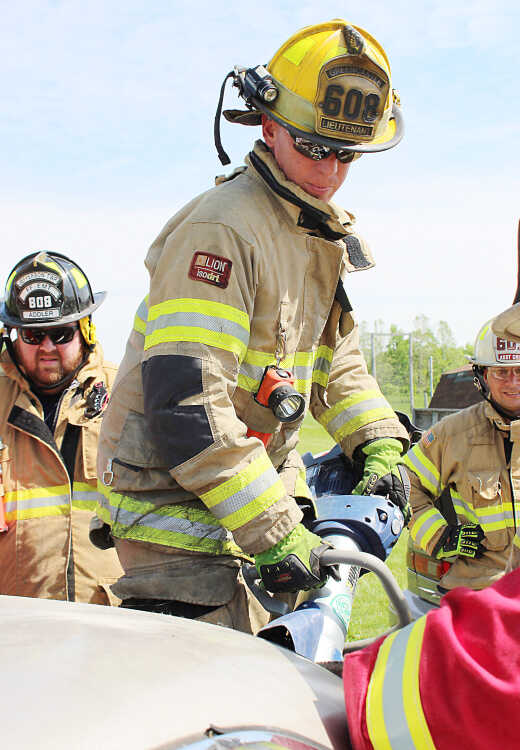 Greencastle Fire Lt. Jason Simonson uses a spreader in the rear of a test vehicle during a tunneling exercise.
Banner Graphic/BRAND SELVIA

The training took place with temperatures hovering around 85 degrees Fahrenheit with all of the firefighters in their turnout gear. It was imperative for everyone to stay hydrated and know their limitations.

Shackelford explained the general procedure for a successful extrication, which starts with stabilizing a vehicle and disconnecting battery power. Once airbags and other components have been checked, dismantling the car piece by piece begins.

ôA lot of times, itĺs dependent on the car wreck,ö Shackelford said. ôWhereĺs the vehicle broken? Where are the patients entrapped? Are their feet entrapped? Is the door folded over? Is the roof down? Is the dash down on them? It just depends on how the vehicle bends and how the vehicleĺs involved in the wreck.ö

Extrication has to be methodical and dynamic, because every accident will have different challenges. The condition of a vehicle prior to the accident will affect how it will bend. No matter what the circumstances, time becomes of the essence in each scenario. 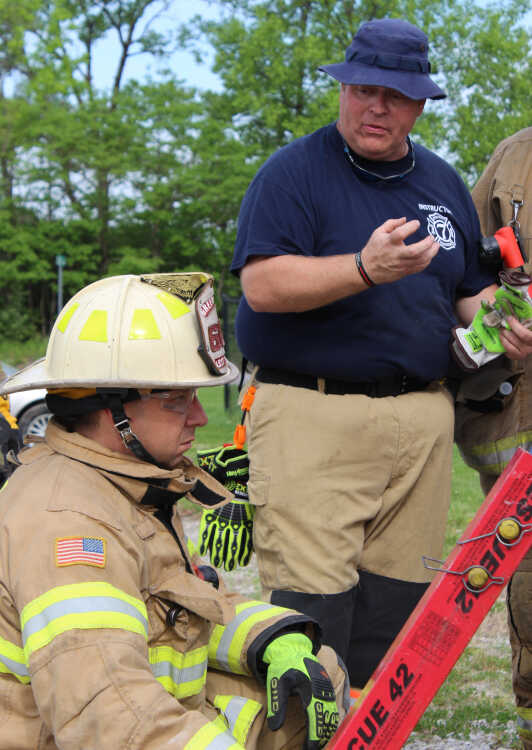 Meanwhile, District 7 Fire Training instructor Jon Shackelford gives some tips to Greencastle Fire Asst. Chief Rob Frank on how to stabilize a vehicle on its side.
Banner Graphic/BRAND SELVIA

ôA lot of the time, the damage is done before we get there,ö Shackelford said. ôWeĺre trying to lessen that damage, and lessen the time until that victim is with a surgeon. That golden hour is what weĺre trying to accomplish.ö

Shackelford said an extrication can be completed in about 30 minutes. This is an efficient operation even as every second counts. It becomes crucial for firefighters to keep calm while and not let it get to them.

ôIf you have a car thatĺs really broken and itĺs really hard to move, itĺs really easy to get frustrated,ö Shackelford said. ôYou have to have good firemen and good leaders who can step back and say, ĹTake a deep breath, letĺs look at what this is doing.ĺ

ôOn the fire and rescue side, we see people at their worst,ö he added. ôPeople call us when theyĺre having a very, very, very bad day. Weĺre there trying to make that day better, and that can be absolutely taxing. Youĺre so focused on (how) you gotta get this job finished.ö

Extrication training helps ensure that firefighters are more proficient with their tools and the techniques, which then turns into speed and accuracy on the scene. An operation has to embody the concept of ôSlow is smooth, smooth is fast.ö

ôIf youĺre not continuing to build these skills, youĺre not gonna lose them, but youĺre not gonna be sharp,ö Shackelford said. Even with 13 years of extrication instruction with District 7 under his belt, there are still things he will pick up.

At the end of the day, what makes a dynamic operation possible each and every time comes down to teamwork and clear communication. This means setting expectations despite the unpredictability of any given incident.

ôEverybody knows their part and their place,ö App said following the practical and written skills testing on Sunday. ôDepending on the situation, I like another set of eyes behind me seeing what I donĺt see. Thatĺs basically what weĺre doing. Weĺre watching out for each other as well as the job at hand.ö

The training itself reinforces better working relationships among the firefighters. App emphasized that since it was done in a staged way, it was important to bounce ideas afterward about how to go about the procedures better. 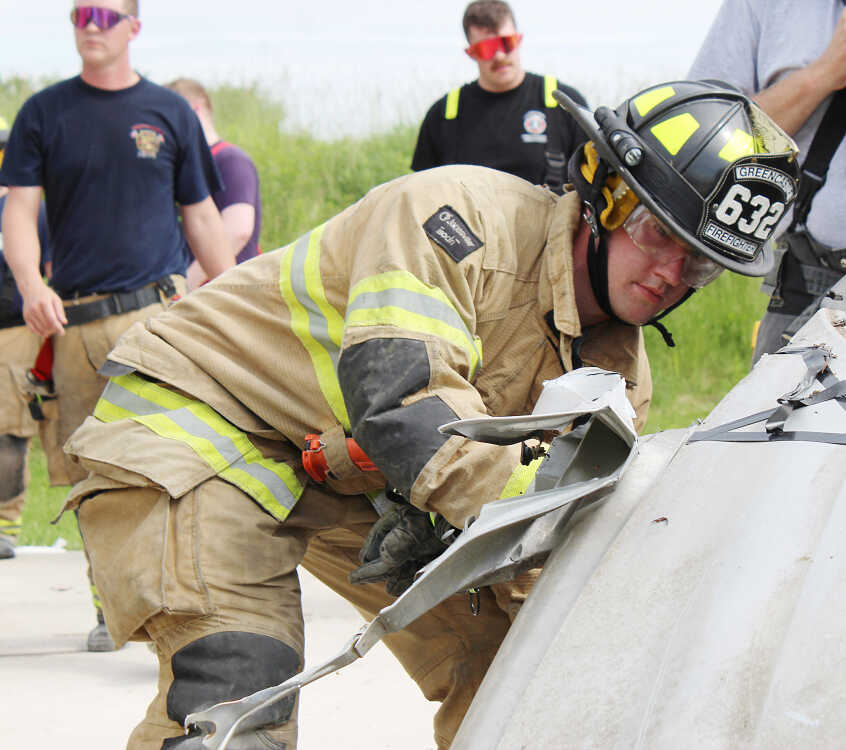 Greencastle firefighter Grant Bryan makes a cut on the fender of a test vehicle during the training.
Banner Graphic/BRAND SELVIA
Respond to this story