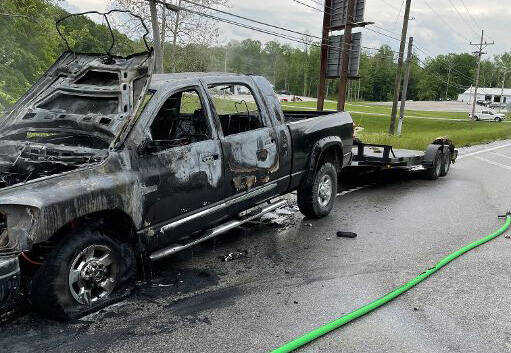 A truck pulling a trailer is charred after it caught fire on Plessinger Hill Tuesday afternoon. While no one was hurt, the truck was a total loss.
Courtesy Cloverdale Township Volunteer Fire Department

Nobody was injured following a vehicle fire that occurred on Plessinger Hill on U.S. 231 south of Greencastle Tuesday afternoon.

At about 2 p.m., the Cloverdale Township Volunteer Fire Department was dispatched for a fully involved truck with a trailer near JTN Services. Firefighters arrived on the scene at about 2:12 p.m. with a tanker and an engine.

Duke Energy arrived on the scene due to the incident being located near a transformer. The lines were inspected and determined to be safe. The Indiana State Police was also at the scene.

The roadway was shut down during the incident and traffic was backed up.

Firefighters cleared the area at about 2:47 p.m. after the fire had been extinguished.

While the driver, identified as Dean Mattingly of Cloverdale, was uninjured, the truck was a total loss. The cause of the fire has not been determined.

A wrecker from Seniour’s Towing retrieved the truck and trailer.