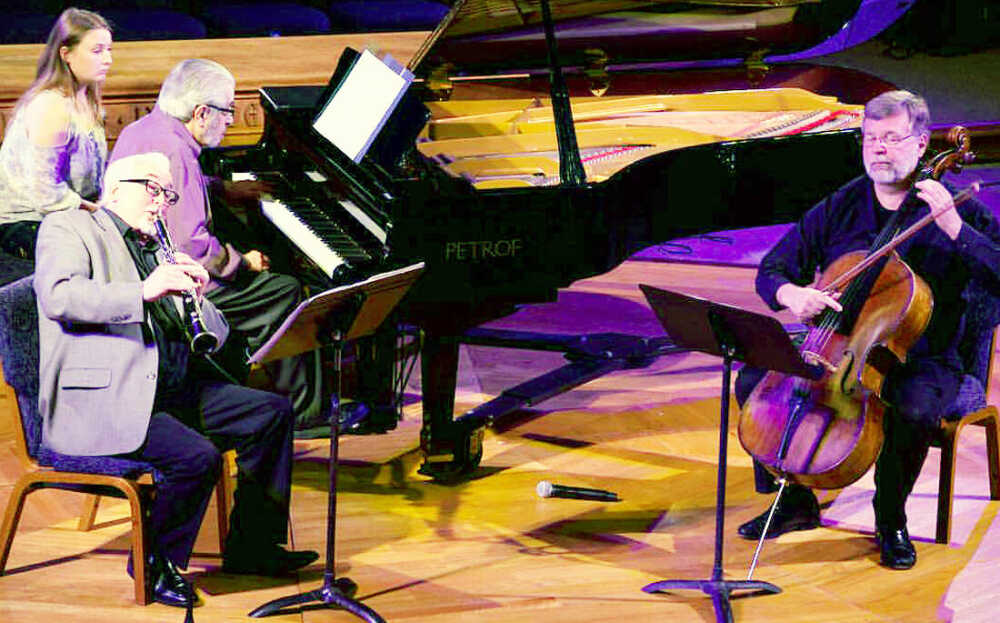 The Greencastle Summer Music Festival continues its series of free Wednesday concerts in Gobin Church this week with “From Vienna to Buenos Aires.”

The 7:30 p.m. program, featuring music by Beethoven and Brazilian “art tango” composers José Bragato and Astor Piazzolla, will be performed by pianist Claude Cymerman, clarinetist Randy Salman, and cellist Eric Edberg, each an emeritus professor at the DePauw School of Music.

This week’s concert is being presented in memory of Beverly Meal Wagoner, and in honor of those who made donations to the GSMF Endowment at the Putnam County Community Foundation in her memory.

Income from the endowment, along with grants from the Foundation and the Putnam County Convention and Visitors Bureau, supplement the annual giving from members of the community, which make up the majority of the festival’s income and make it possible for the concerts to be presented with no admission charge. The Inn at DePauw also provides in-kind donations.

“We spent considerably more on the virtual programs than the grants and donations we received to help with those expenses, and are spending quite a bit to make this summer’s available online for those who can’t make it in person or who aren’t comfortable with attending indoor concerts yet,” explained Edberg, the festival’s founding artistic and executive director, meaning the festival is starting out this summer with reserve funds at a low point and will have higher-than-usual expenses this summer. “So every contribution makes a difference.”

“Claude, Randy and I have been playing together since the fall of 1988 — almost 33 years,” Edberg continues. “I can’t think of anything that more exemplifies the GSMF motto of ‘friends making music for friends.’ And it’s a really enjoyable, varied program.”

More than 100 people attended last week’s opening concert, and Edberg reports that even with social-distancing protocols, there was plenty of room for everyone, with the entire audience wearing masks.

All the concerts this summer are being videotaped and will join the 29 virtual music concerts that were produced from October through May on YouTube and Facebook, as well as Channel 3 in Greencastle, at 3 p.m. and 8 p.m. Saturdays and Sundays, and in three-hour blocks starting at 2 and 8 p.m. Tuesdays and Thursdays. Visit greencastlemusic.org for more information.

The festival will continue next week with the Abel Family Quartet and Friends performing music by Beethoven and Brahms.

A native of France, pianist Cymerman graduated from the Conservatoire National Supérieur de Musique in Paris with highest honor. After winning national and international competitions, including the grand prize at the Marguerite Long-Jacques Thibaud contest, he studied at Indiana University with Gyorgy Sebök. The late French President Georges Pompidou, in a special ceremony, recognized him as “Outstanding Pianist.” Cymerman performs extensively as a recitalist and chamber musician and has appeared as a soloist with the Radio France Orchestra, Orchestre des Pays de la Loire, Orchestre National d’Ile de France, Orchestre Symphonique de Limoges, the Luxembourg and San Francisco chamber orchestras, as well as the Indianapolis Symphony Orchestra.

Randy Salman is principal clarinetist with the Lafayette Symphony Orchestra and has worked professionally with the Indianapolis Symphony and Indianapolis Chamber Orchestras, David Baker, Gunther Schuller, Quincy Jones, Tony Bennett and many others. Professor Salman is the Jazz Editor for The Clarinet Journal where he contributes CD reviews and articles on a regular basis. He has an extensive performance background which includes programs at the International Clarinet Association, Clarinetfest, University of Oklahoma Clarinet Symposium, International Association for Jazz Education Conference and Indiana University Clarinet Symposium. An active freelance musician, Salman performs for many famous touring ensembles and shows. He is an active studio musician on a wide variety of educational recordings for various music publishing companies. An accomplished performer of both jazz and classical music, he has been a faculty member of the Jamey Aebersold Summer Jazz Workshops since the late 1980s. Salman has performed, toured and recorded extensively with both the Smithsonian Jazz Masterworks Orchestra and Chicago Jazz Orchestra, among others.

Classical and improvising cellist Edberg, principal cellist of the Lafayette Symphony, is a concert organizer, workshop leader and drum circle facilitator committed to enlivening and connecting people through music, he is the founding artistic director of the Greencastle Summer Music Festival. He has performed internationally as a soloist and chamber musician with artists including Grammy-winning pianist/composer Fernando Otero; pianists Claude Cymerman, Taka Kigawa, and May Phang; cellist David Darling; and flutist Paul Horn. Dedicated to music as a healing force and to bringing classical music “everywhere,” Edberg has played in nursing homes, schools, hospitals, prisons and even the New York City subways.