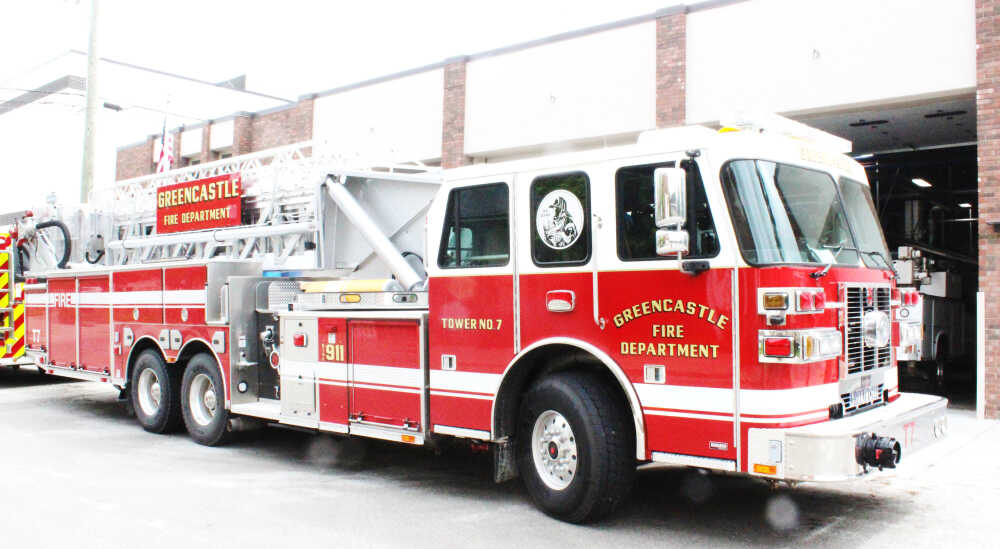 When Greencastle’s new aerial ladder fire truck triumphantly arrived in town Monday, a Greencastle native came along for the ride.

As city firefighters basked in the glow of the new truck and its various amenities, Jeff Wheeler, production manager for Sutphen Corp, Dublin, Ohio, beamed as well.

“I first saw the truck as a rolling chassis 120 days ago,” offered Wheeler, who was born in Greencastle but moved to Indianapolis in 1972 after finishing third grade at Miller School. 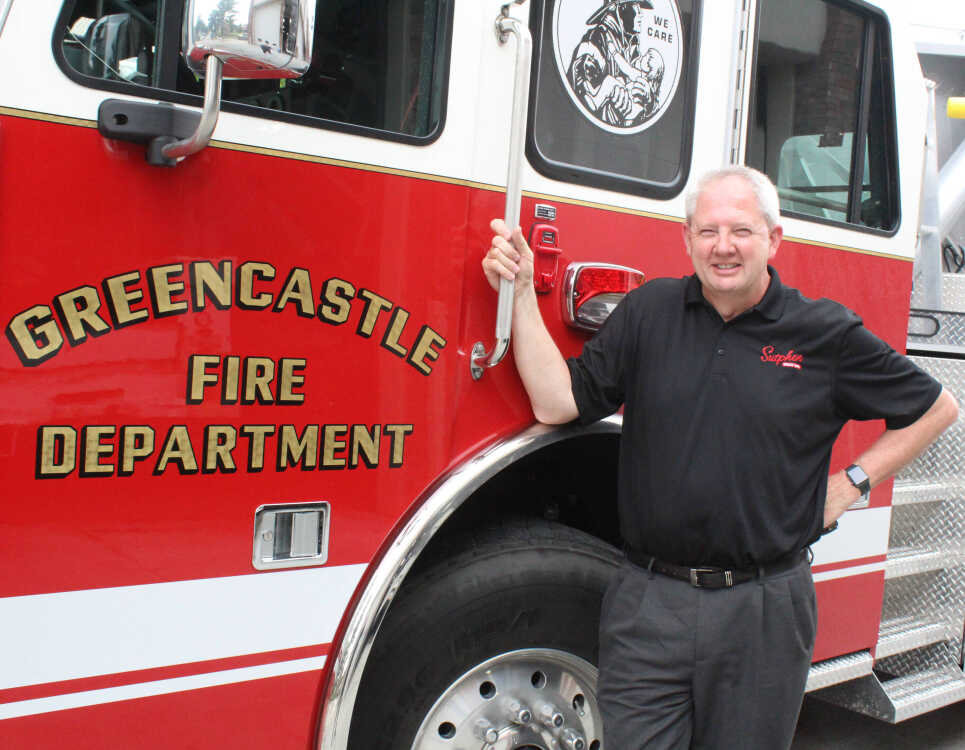 Part of the Sutphen Corp. team that produced the new Greencastle aerial fire truck, production manager Jeff Wheeler was able to visit his old hometown and reminisce a bit during the arrival of the city’s new tower truck Monday.
Banner Graphic/ERIC BERNSEE

Oddly, when Wheeler first laid eyes on the chassis of the Greencastle fire truck, it was labeled No. 6767 (as in the Putnam license plate prefix).

“That was not planned,” he said. “That was the number of the truck.” 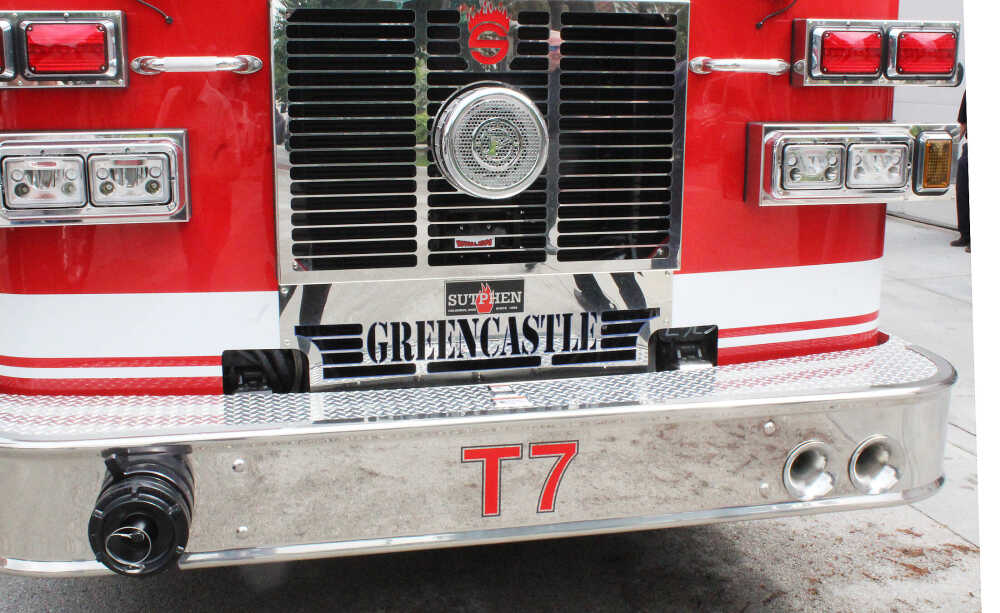 The shiny front of the new Greencastle Fire Department aerial fire truck not only bears the Greencastle name cut out in metal but also a plaque with the name of the manufacturer, Sutphen Corp. of Ohio. The T7 designation marks the truck as Tower 7 in the GFD lineup.
Banner Graphic/ERIC BERNSEE

“My responsibility,” Wheeler said as GFD Lt. Jason Simonson jumped in behind the wheel and commandeered the truck’s headset, “was as engineer, project management and being accountable” for the unit.

That sparked Wheeler to go into a deep local dive, recalling having the late Peg Headley as a kindergarten teacher at Fillmore, buying baseball cards at the Commercial Hotel and calling pharmacist Chet and Janie Coan family friends. 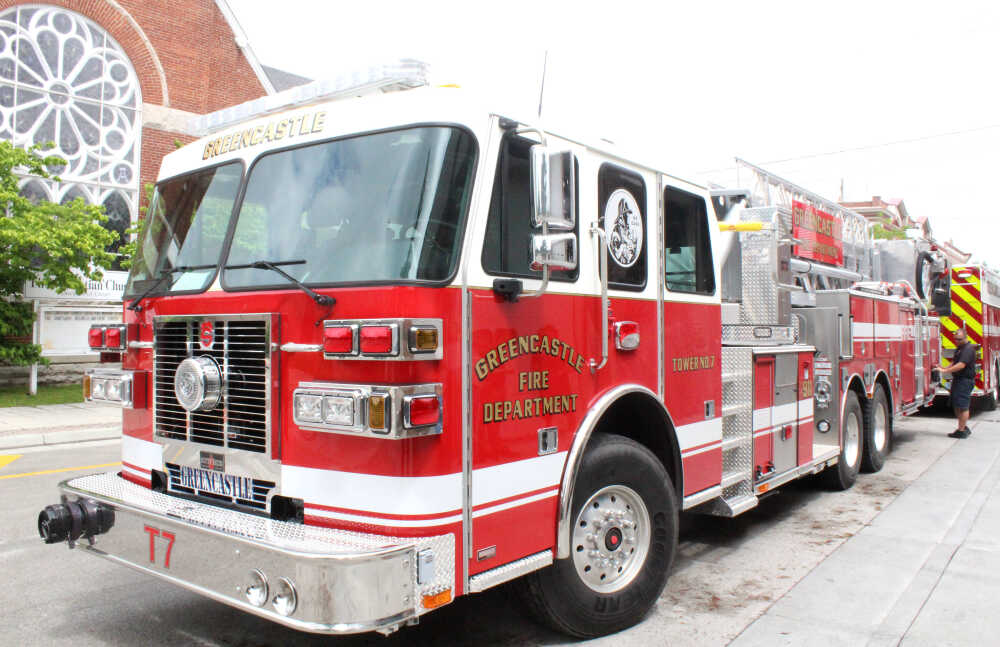 “I have Greencastle in my blood,” Wheeler said, “but he’s got fire trucks in his.”

Being on the scene of the delivery of a $1.269 million fire truck was a novelty for Wheeler.

“This is the only delivery I’ve ever been on, and this is my third year with the company,” he said. 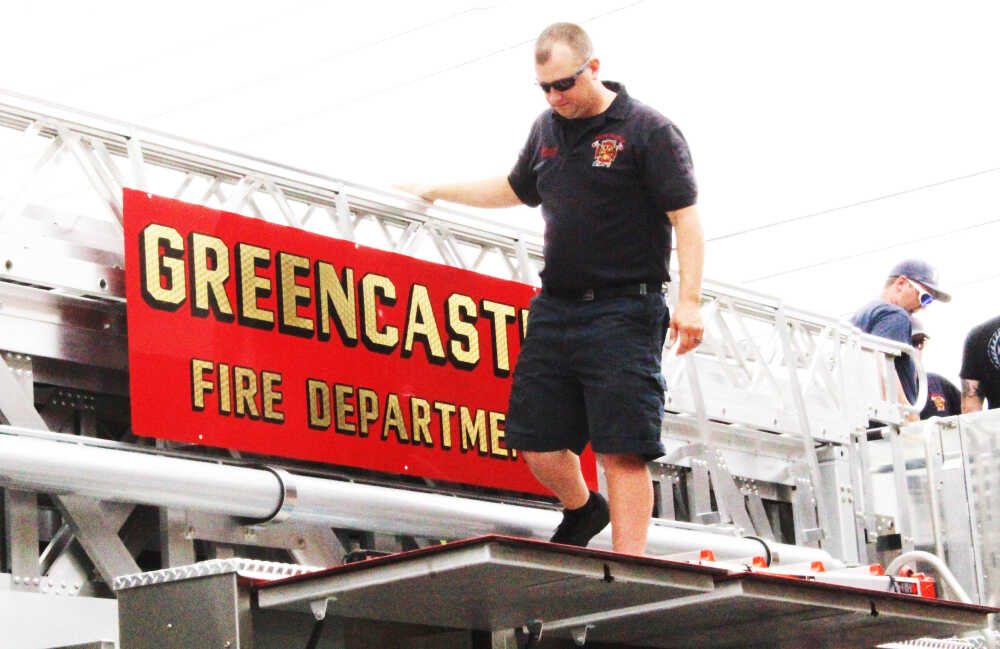 “I jokingly told the people at work, ‘This is the most important fire truck we will build this year.’”

Greencastle Fire Chief John Burgess praised Wheeler, noting “whenever we were over there (in Ohio), he always made a point to look us up.”

While some lucky passersby got a glimpse at the shiny new truck Monday as it was parked along the Indiana Street side of the fire station, the new engine will be involved in training much of the rest of the week. Each GFD shift will get five or six hours of instruction.

“We want to take time to make sure everybody’s used to it before we put it in service,” Burgess said.

At some point the department will have a “hosing down” ceremony where firefighters turn the hoses on the truck. Then, after drying it off, they will simulate pushing the truck into the firehouse in a firefighter ritual.

But the projected real coming out party will likely be the Putnam County Fair Parade.

“We’ll be in the fair parade,” Burgess assured. “Everybody’s asking about that.”

The new truck has some improvements over the 1986 model the city took ownership of in 1987.

While both have a 100-foot platform ladder, the new truck has higher ladder rails, Burgess said, which will make it safer to climb up and down.

“The new one seemed higher but I know it’s not,” Burgess said after testing out the apparatus at the Sutphen facility a couple of weeks ago.

“Compartment space will be like night and day on the new truck,” the chief added.

The new truck will also provide 1,500 gallons of water per minute, getting more water to the top of the tower than the old truck (1,250 gallons per minute).

“Greencastle’s got some tall structures in this town,” Wheeler pointed out, “so to have a tower is a good thing.”

The old tower, meanwhile, is being kept in a storage building at the street department “until somebody is interested in it,” Burgess said.

GFD thought it had a buyer in Texas but the financing fell through there. Meanwhile, because of the age of the old truck, it was not usable as a trade-in.

It was the mid-1980s fire in the old Opera House on the west side of square that sparked interest and a fundraising groundswell in securing the original tower truck. Use of an aerial truck brought down from Crawfordsville kept the Opera House fire from getting into other buildings, essentially saving the west side of the square.

The city’s tower truck has been a lifesaver several times over, including during the 2013 downtown blaze on West Washington Street, just a block off the square, and then assisting in controlling a similar fire in downtown Brazil.

“It’s served us well,” Chief Burgess recently assured the Board of Works.

DePauw University would certainly agree as the aerial truck was instrumental in fighting the April 7, 2002 fire that destroyed Rector Hall.

However, no loss of life occurred in that fire and not a single injury was reported to a DePauw student.

The aerial truck was deployed in such a manner that day that it kept the fire from leaping over onto the adjacent Lucy Rowland and Mason residence halls.