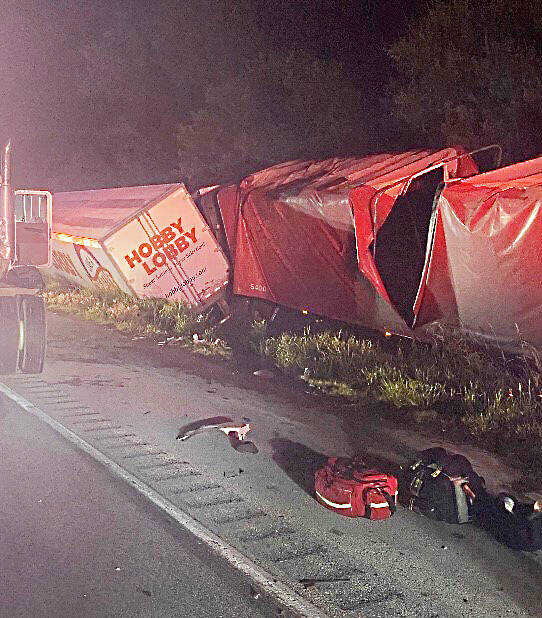 Shortly after midnight, troopers from the Indiana State Police Putnamville Post and other first responders were dispatched near the 52-mile marker eastbound on Interstate 70.

The preliminary investigation by Trooper Austin Fowler revealed that Alfred Hill Jr., 37, of Houston, was outside of his 2001 Mack semi tractor-trailer on Interstate 70.

Hill was placing out emergency triangles due to his vehicle becoming disabled. The disabled Mack was partially in the driving lane of I-70 with no lighting.

Amer Al Fatlawi, 39, of Lincoln, Neb., was eastbound in the driving lane in a 1996 Freightliner semi tractor-trailer. At the last second, Al Fatlawi observed the disabled semi partially in the roadway and attempted to divert his semi into the passing lane to avoid a collision.

However, a 2021 Volvo Semi tractor-trailer driven by Christopher M. Lyles, 39, of Griffin, Ga., was traveling in the passing lane and was unable to avoid a collision with Al Fatlawi’s Freightliner.

This collision forced both semi tractor trailers to the south side of Interstate 70, striking Hill and the disabled semi. All three commercial motor vehicles came to rest in the ditch.

Hill was killed in the collision.

Al Fatlawi was airlifted to Methodist Hospital, with non-life-threatening injuries. Lyles sustained no injuries in the collision.

Drugs and alcohol were not a contributing factor of the accident.

Fowler was assisted by other Putnamville troopers as well as the Morgan County Sheriff’s Department, Morgan County EMS, Lifeline and Curtis Wrecker Service.