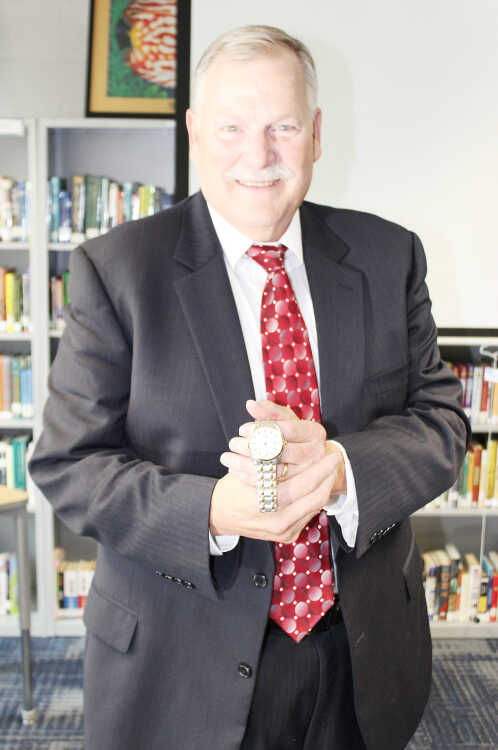 Bruce Bernhardt shows a Citizen watch presented to him after his final school board meeting as superintendent at South Putnam Wednesday evening. Bernhardt will retire on June 30.
Banner Graphic/BRAND SELVIA

The South Putnam School Board’s regular meeting Wednesday was a bittersweet one as Bruce Bernhardt was recognized for his four decades of service to the school corporation.

In his last superintendent report, Bernhardt said he and his successor Corey Smith have had “lots of good conversations.” The bulk of his statement, though, was simply expressing thanks.

“I want to express my sincere appreciation to all of the staff that I’ve worked with, teachers, all of the classified staff, students and parents and the community as a whole,” Bernhardt said. “The things that I hold dearest are the relationships that I have had with so many different people over all of these years.”

Bernhardt said that South Putnam has been his home, as he came there to teach out of college. After 44 years as an educator, it is now time to “hang it up” and look forward to spending time with his grandchildren.

“This school corporation is very near to my heart,” Bernhardt said, ”and I wish all of you the very best in the future. I’ll be rooting for you, I really will.”

As a token of appreciation, Board President Hollie Hutcheson presented Bernhardt with a Citizen watch.

He also went over to Smith and said “Tag, you’re it!”

In addition to recognizing Bernhardt, board member Lisa Cooper also spoke on this school year in terms of personnel issues and the dedication of faculty and staff in general.

“This has been a tough year,” Cooper said. “We’ve lost a lot of people but we’re gaining a lot of people. I just wanted to express my gratitude and appreciation for all those who have served our community, even if it was for one year to 44.”

• The board approved a proposal to begin including consent agendas on its meeting agendas. Smith explained that they separate items such as claims and personnel which can be approved together. However, any consent item can be singled out for discussion.

• The board approved paying Smith at his per diem rate for days worked between June 2 and 30. Smith’s contract will be effective on July 1.

• The board approved the purchase of two new school buses not to exceed $250,000. Bernhardt noted that the corporation would go through a service center which would send out statewide bids. The purchase is due to two buses being in disrepair and not fixable.

• The board approved to pay returning South Putnam school bus drivers at the rate they earned when they left or retired. Bernhardt provided that bus drivers are in short supply, and that this policy would be an incentive.

• The board approved to pay two cooks $11 an hour for work during summer school, in which both breakfast and lunch are being provided. Bernhardt said this would come out of the corporation’s cafeteria fund.

• The board approved for Kramer Companies to conduct a survey of the land and structures on the main campus, which includes the middle-high school and Central Elementary. The survey is connected with potential improvements which would involve bonds.

Along with Bernhardt and Smith, Administrative Assistant Terri Beasley and the entire board were present for the meeting.

The next regular meeting of the South Putnam School Board is scheduled for Wednesday, July 14 at 7 p.m.