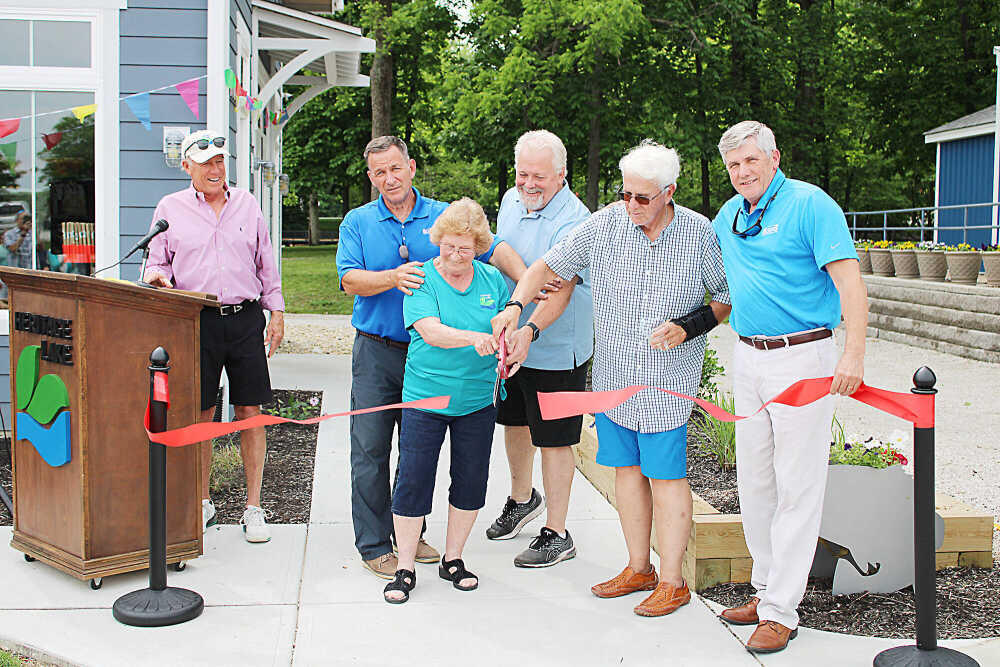 The event gave community members a taste of the food and drink the new restaurant and bar has to offer, though many had already sampled the wares in the prior two weeks the restaurant had been opened.

The opening of the new restaurant also coincides with the 50th anniversary of Heritage Lake’s establishment, a point not lost on current Board President Paul Forbes.

“Please join us in celebrating 50 years of Heritage Lake with a new building, a new restaurant and, hopefully, a very happy, happy community,” Forbes said. “I was touched the first week to watch everybody come into this restaurant smiling, talking, meeting each other. It was absolutely wonderful.”

The journey to a new marina and restaurant has not been a short one. The restaurant actually started as the vision of the former board president Charlie Beard, who passed away in October 2018.

“Charlie had a vision that he spoke about and this building behind me was the vision,” Rozelle said. “Charlie passed away shortly after sharing his idea with the board. From that point, shortly after his passing, the board made Charlie’s vision a reality.”

It began with the realization that the old marina had to be replaced, but the hope was that a restaurant could be part of the plan as well.

“We thought we’d put enough storage in there in case we found a restaurateur down the road,” Forbes said. Fortunately for us, Ed Sahm helped design the kitchen and eventually thought it might be a great home for his organization to start a lake restaurant. We thank him for that.”

It wasn’t quite that simple, though. It meant getting the county to rezone the land on which the marina sits, a move that came with a challenge from some of the lake’s residents. It also meant challenges within the lake’s own governance.

It was also a matter of managing the finances.

“Paul Forbes agreed to spearhead this project, while Jim Johnson made the finances all work out,” Rozelle said. “This all would not have been possible without all of us POA members paying the way for what we will all enjoy for a long time to come. All of us, our children and any future POA members that choose to move to Heritage Lake will enjoy this for a long time to come.” 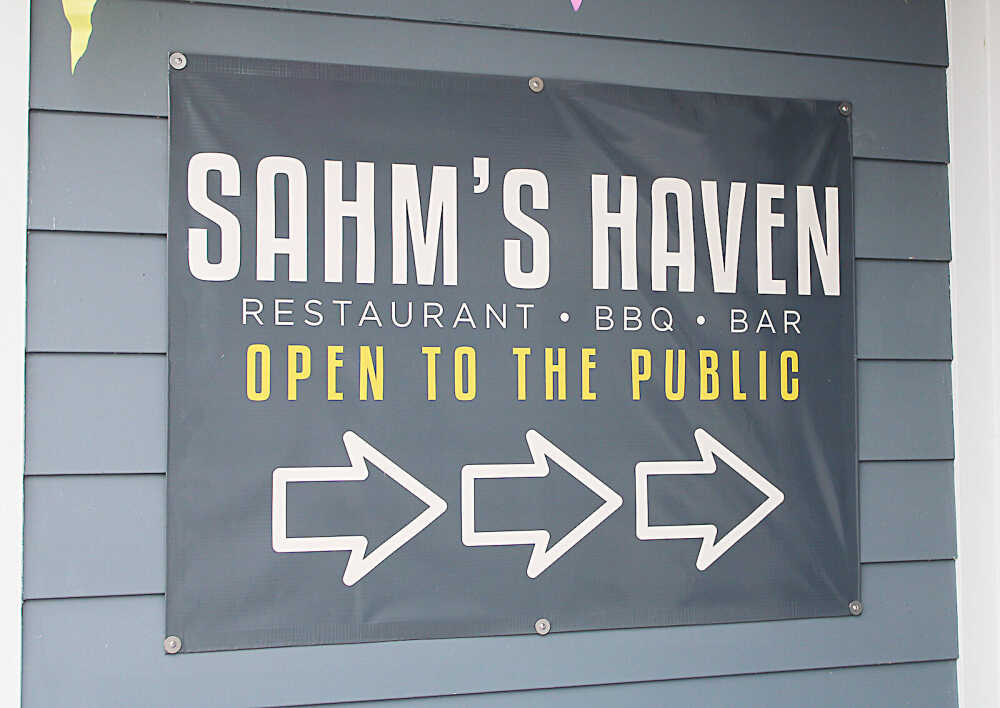 However, working with Brandt Construction, the project seemed nearly complete in 2020 when COVID-19 delayed many plans, though the marina itself was able to reopen for Memorial Day last year.

“Along with Chris Schafer, I think the number one volunteer during the opening of this building was Darcy Schafer,” Forbes said. “Darcy, your time was so valuable to us for the smooth opening of the marina a year ago Memorial Day.”

“Without Ken Rozelle’s work the last 2-1/2 years, none of this would’ve been possible,” Forbes said.

Marina manager Lois Napier thanked others who made the new marina possible.

“The new building is beautiful. The restaurant is great so far,” Napier said. “Everybody enjoy. Come and see us at the new building. Thanks to Opal Little, Woody Napier, Bob Hanson, Al Hawkins, Arlene Richmond and all the other crew we’ve had at the marina who’ve worked so hard to make this building possible.”

The restaurant itself, though, had to wait until this year.

“We’ve had quite the journey here getting open,” restaurant owner Ed Sahm explained. “We tried to do it last year and that obviously didn’t work. With the pandemic, we kept trying to push it down the road to open when we could open fully. It’s been a long time in the planning.”

And if the Sahm name sounds familiar, the family has been operating Sahm’s Place in Broad Ripple for decades, and now runs additional restuarants in Broad Ripple, Carmel, Fishers, Nora, Bloomington, Pendleton and Attica.

“We’re really excited to be here,” Sahm said. “It’s a great community, a great lake. I’ve been doing this for 36 years now, so we have a full understanding of what you need in the summer time, what you need in the winter time. We’re here to feed you throughout the year, hopefully a really high-quality product at a good price.

“You can always feel free to talk to us and tell us what you like and what you don’t like — seriously. We’re just here to improve day after day and get you food and drinks from this point on.”

The restaurant is open to the general public, not simply Heritage Lake property owners. 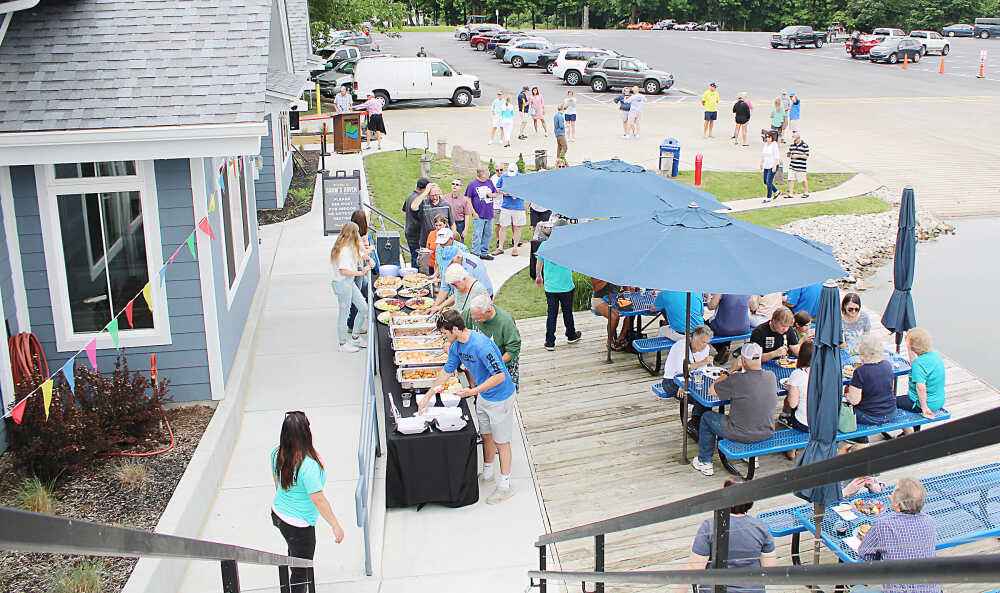 Banner Graphic/JARED JERNAGAN
Comments
View 2 comments
Note: The nature of the Internet makes it impractical for our staff to review every comment. Please note that those who post comments on this website may do so using a screen name, which may or may not reflect a website user's actual name. Readers should be careful not to assign comments to real people who may have names similar to screen names. Refrain from obscenity in your comments, and to keep discussions civil, don't say anything in a way your grandmother would be ashamed to read.
Respond to this story