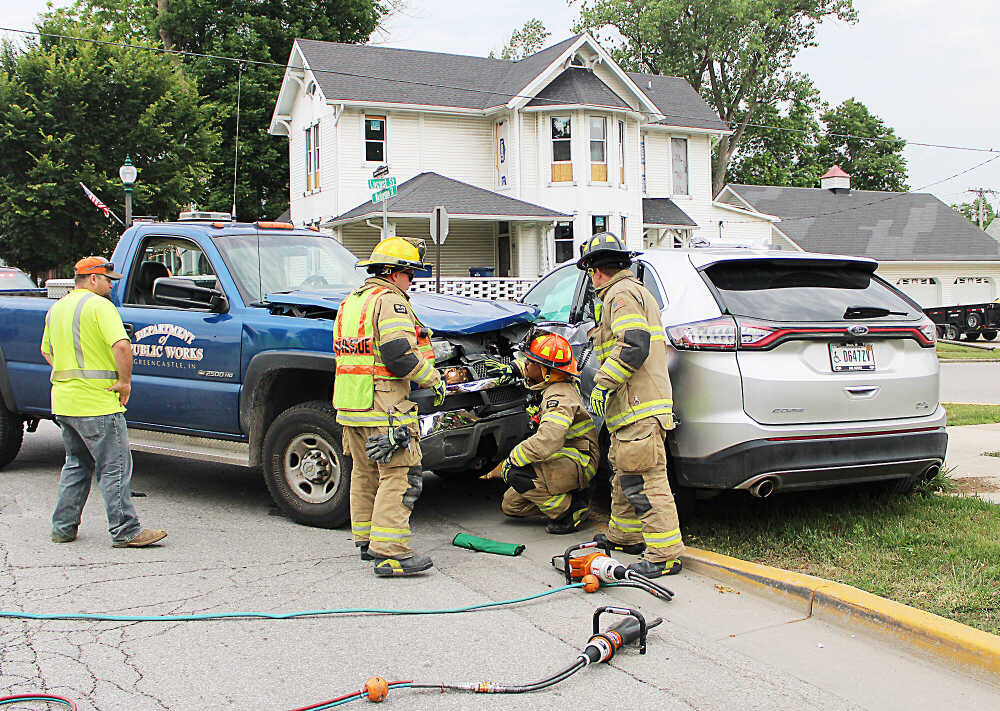 Shortly after 9 a.m., Department of Public Works employee Derrick Grimes, 30, Greencastle, was eastbound on Washington Street (U.S. 231) in a 2003 Chevrolet Silverado registered to the City of Greencastle.

Grimes told Sgt. Ed Wilson of the Greencastle Police Department that a 2018 Ford Edge was northbound on Locust Street. Grimes said that although the Ford, driven by 73-year-old Melissa Gough of Greencastle, came to a stop, it then attempted to proceed across Washington Street in his path.

Grimes could not avoid the crash and T-boned the driver’s side door area of Gough’s vehicle.

Gough told Wilson she did not remember what had happened, simply that she had stopped, pulled out and her vehicle was hit.

Witnesses also told Wilson that Gough had come to a stop and then failed to yield right-of-way.

The impact carried both vehicles across the westbound lane, with Gough’s crossover coming to rest in the grass northeast of the intersection of Washington and Locust Street, the southwest corner of the City Hall property.

After making sure that Gough was not in danger, Grimes and his fellow city employee in the truck simply began doing their jobs.

“I have to give the city employees kudos on that — they checked on her welfare and then they started directing traffic,” Wilson said.

Gough was initially entrapped in her vehicle, as there was heavy damage to the driver door and the truck was inoperable and could not be backed away.

Greencastle firefighters arrived on the scene, prepared to perform an extrication. However, once it was established by emergency personnel that Gough did not have any serious injuries, they were able to help her out through the passenger side door.

Gough was walking after the crash and not suffering from any obvious injuries. However, a Putnam County EMS ambulance transported her to Hendricks Regional Hospital.

While not suffering from any obvious injuries, Gough was transported to Hendricks Regional Hospital by Putnam County EMS.

Traffic was initially passable on the south side of the road, though Wilson said it later had to be shut down when Seniour’s Towing was retrieving the two vehicles.

Firefighters also remained on the scene, assisting with retrieval and cleanup.

Wilson also noted that a citizen, whose name he did not catch, helped with traffic control as well.