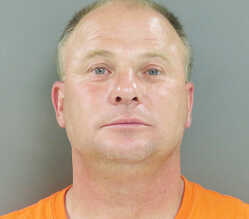 BELLMORE — A Roachdale man found himself in the Parke County Jail on Friday night after fleeing from and later threatening Parke County sheriff’s deputies.

Charles Corbin, 51, faces multiple criminal charges for the incident that began as an attempted traffic stop.

At 9:28 p.m., deputies attempted to stop Corbin on his motorcycle just east of Bellmore.

Refusing to stop, Corbin allegedly led police in a pursuit reaching speeds in excess of 100 miles per hour.

Corbin later came to a stop and deputies apprehended him, but only after he refused verbal commands.

After Corbin was taken into custody, he allegedly threatened the deputies’ lives.

He was booked in the Parke County Jail and preliminarily charged with resisting law enforcement, driving while intoxicated, driving as a habitual traffic violator and intimidation.