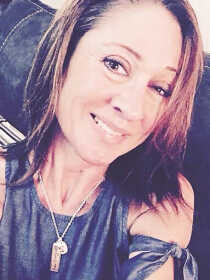 She is survived by her son, Cole Stoia of Fishers, who she considered her greatest accomplishment; her parents, Charles “Chuck” and Roberta Weliever; brother, Brett (Amy) Weliever; sister, Lauren Weliever; and her nieces, Alexandra and Gretchen Weliever; as well as several aunts, uncles, and other extended family members.

She was preceded in death by her maternal and paternal grandparents and cousin Scott Hansen; as well as an aunt, Karen Hansen Finney.

Krissy grew up with her siblings in Brazil and attended Clay Community Schools as a child. She attended Purdue University before she earned her Bachelor of Fine and Studio Arts from Indiana State University in 1989, before becoming a graphic designer for several Cincinnati and Indianapolis-based companies. She also earned a web-design certification from IUPUI.

She was known foremost as a loving mother to Cole, who will be attending his senior year at Indiana University this fall. Her family and friends will remember her as fun-loving, the life of the party, a loyal listener, a helper, and a terrific artist. Krissy enjoyed reading, cooking, working in her garden, photography, loving her pets and spending time with family.

Funeral services will be held Friday, July 2 at First United Methodist Church in Brazil with Pastor Kerry Clear officiating. The family will accept friends for visitation on Thursday from 4-7 p.m. at Moore Funeral Home in Brazil. A private burial will be held at Greenlawn Cemetery in Darlington.

In lieu of flowers, memorial contributions may be made to the American Diabetes Association.