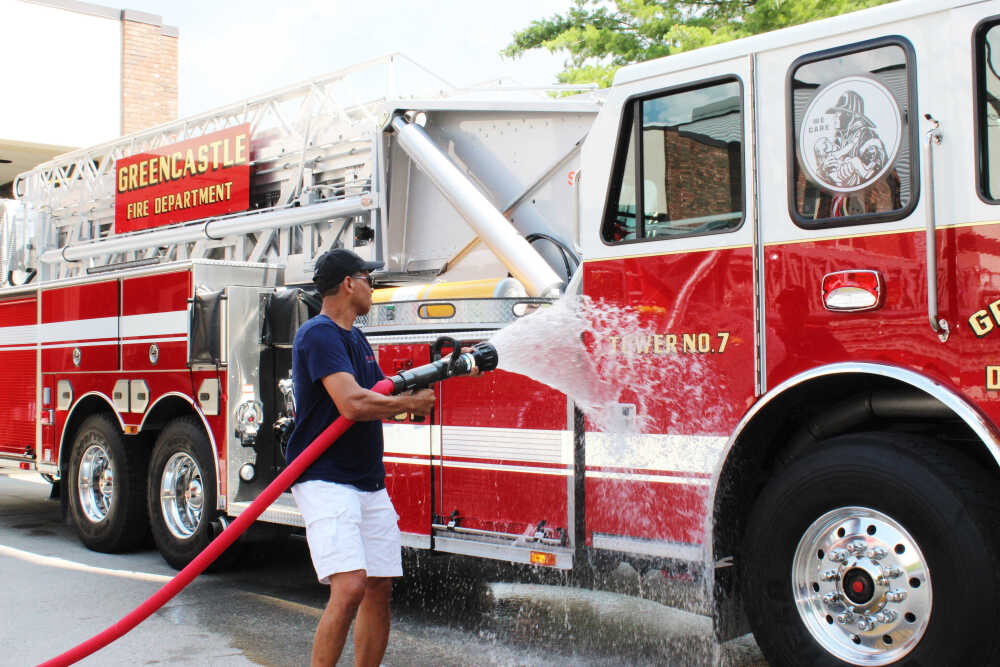 A little more than three weeks after its highly-anticipated delivery, the Greencastle Fire Department inaugurated its new Sutphen aerial truck Thursday afternoon with a ceremony steeped in firefighting tradition.

Along with finally pressing the new apparatus into service, GFD also officially welcomed its two newest firefighters among its ranks.

Standing alongside Chief John Burgess with city officials and other members of the community in attendance, Mayor Bill Dory, Greencastle Township Trustee Steve Butts and Asst. Chief Rob Frank each offered remarks on the occasion.

“This vehicle represents an important investment here in our community for the protection of not just the citizens of Greencastle, but the entire county,” Dory said. He added that it also represented a partnership between the Greencastle City Council, Greencastle Board of Works, DePauw University and the township.

Mentioning the fires which occurred at Rector Hall on the DePauw campus in 2002 and in downtown Greencastle in 2013, Dory commended the teamwork between area fire agencies. He noted, however, that it can take up to 45 minutes for a ladder to come from one of the surrounding counties.

With it being the only one in Putnam County, it is hoped that GFD’s ladder will provide a more immediate service for years to come.

“We hope that this new truck will last as long as the old truck that has stayed with us for 35 years,” Dory said, providing that GFD’s newest pumper was typically good for about 20. “These are expensive, but we do get a nice long life out of them.” 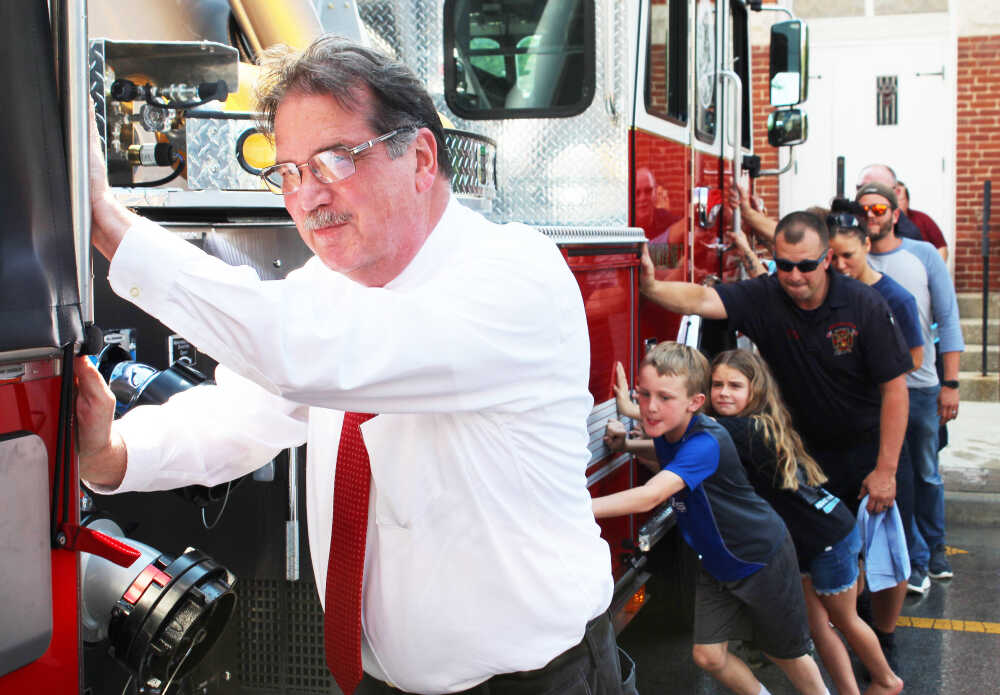 Being brief with his remarks, Butts credited the efforts of Burgess and his predecessors in building up the fire department. He put emphasis on former Chief Bill Newgent’s focus on training, adding that Burgess has followed through with it.

“I believe that we’ve got about the best fire department of any middle-sized community in the state,” Butts said confidently.

With that, Butts presented “the largest assistance check that the township has ever written.” The amount was actually half of Greencastle Township’s contribution toward the $1.269 million purchase.

“I want to make it clear, it’s not for me personally,” Dory stipulated with laughter from the crowd. “This will be going directly to (Greencastle Clerk-Treasurer) Lynda Dunbar for deposit.”

Frank first noted that GFD did not have an aerial truck prior to 1986. He referenced fires downtown at Montgomery Ward and the Opera House in 1982 and 1985, respectively, both of which called upon a ladder from the Crawfordsville Fire Department. It was then decided that there was a need for a ladder, and funds were raised to purchase the old Sutphen truck.

Grant Bryan and Peter Moorton take their oaths as the newest members of the Greencastle Fire Department after the wet-down and push-in of the new apparatus.
Banner Graphic/BRAND SELVIA

“It doesn’t look 35 years old, right?” Frank commented. “That’s a testament to the guys who work at this department and take care of this equipment and serve you guys as a community.

“I feel the same way (Butts) does,” he added. “We’re probably one of the best fire departments around here.”

Frank then touched on the tradition of the wet-down and push-in rituals. After returning from a fire, hand-drawn pumpers would be unhitched from horses. The pumpers would then be pushed back into the firehouse after they and the horses were cleaned.

Engineer Paul Hinton, a 20-plus-year veteran of GFD, was then given the honor of wetting down the new truck. Several GFD firefighters then dried it before pushing it back into the bay with family members and others joining in.

Besides Dory, Butts and others having the opportunity to go up in the ladder, the event was also highlighted by the swearing-in of firefighters Grant Bryan and Peter Moorton.

Bryan, who has served with the Russellville Volunteer Fire Department, was hired full time last May. Meanwhile, Moorton, who has previously served as a volunteer over in Clayton, has been full time with GFD for over a year.

With it finally being official for him, Moorton said being sworn in as a firefighter for GFD follows along with its traditions and “making it the real deal.” For him as well as Bryan, it is exciting to be a part of the “full-time life.” 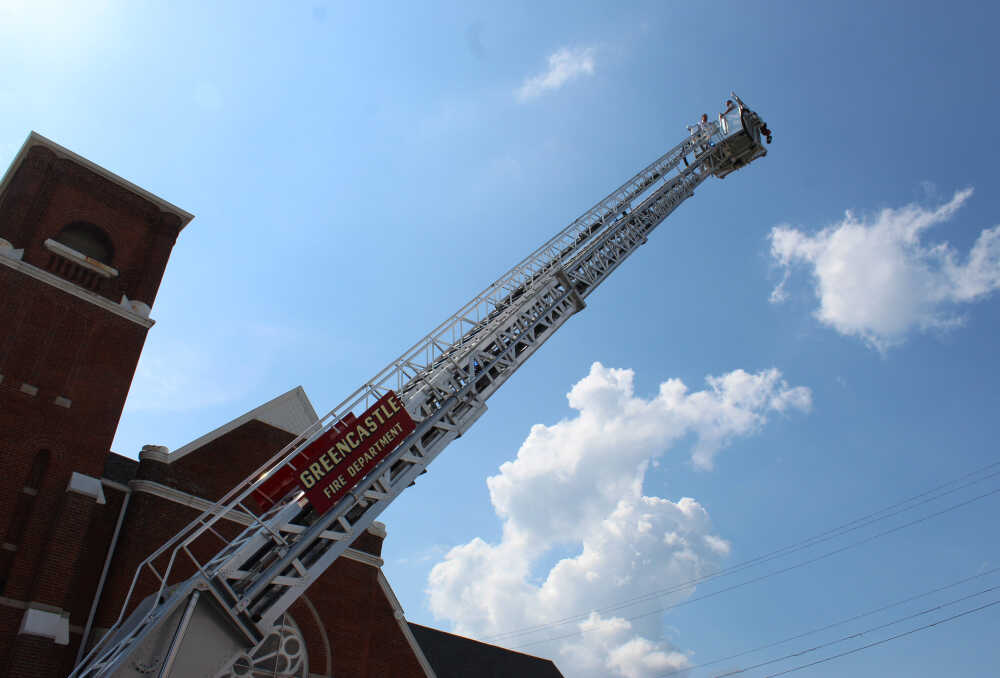 Following the swearing-in of Bryan and Moorton, Dory accompanies Greencastle firefighters Jake Armstrong and Darrick Wiatt as they maneuver the ladder, which can reach up to 100 feet.
Banner Graphic/BRAND SELVIA

“It puts that professional stamp on doing this as a career choice, as a living,” Bryan said. “This is the greatest job in the world, and I think it’s the most noble occupation someone can go after, to be the people who go to people’s aid when they need help.”

Them taking their oaths with the new apparatus being pressed into service was not just a commitment as professionals. It also showed a commitment from the fire department to continually improve.

“It is really neat, because this kind of shows that we’re in this mindset of constantly improving and maintaining a certain professional standard of our job,” Bryan said. “(With) us getting sworn in with it, it’s that sense of ownership.

“We kind of look at our trucks as almost like a team member,” he added. “When we have a truck, it’s our truck. That truck provides what we need to do our jobs.”

Both agreed that they could “grow old” with the new ladder.

“I love it here,” Bryan summed up. “I love the town. I love the guys. Our leadership’s great. We have a lot of great things going. It’s the best fire department in the world as far as I’m concerned.”

“I have no plans on going anywhere,” Moorton concurred. “It’s going to be exciting to see this department grow as time goes on and become even better. I’m just really looking forward to it.”