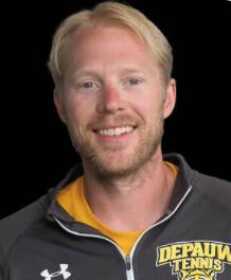 Andrew Gregory, assistant men’s and women’s tennis coach at DePauw since 2010-11, has been selected as the 2020-21 Intercollegiate Tennis Association Division III Women’s Tennis Assistant Coach of the Year. The award honors an assistant coach who has exhibited outstanding leadership in ways that contribute to on and off-court team performance.

In his 11 seasons, Gregory has helped the women’s teams to a 141-97 record in dual matches in addition to five conference championships and no worse than a fourth-place conference finish. From 2011 through 2015, DePauw’s women’s teams earned five consecutive appearances into the NCAA Division III Championships. The 2020-21 Tigers won the North Coast Athletic Conference West Division before falling to eventual NCAA semifinalist, Kenyon, in the NCAC championship match.

“In addition to his talents as a leading-edge coach and fitness expert, Andrew brings a great deal more to our tennis program,” DePauw head men’s and women’s tennis coach Scott Riggle said. “He sets a wonderful example to our players as someone who succeeds with humility, loses with dignity, and always keeps things in their proper perspective. He is the consummate competitor and realizes that the day-to-day time put in to perfecting the fundamentals while always looking for better and more efficient ways to improve are the cornerstones of success. He genuinely cares for everyone in our program—not only as players but as young women and men as well.”