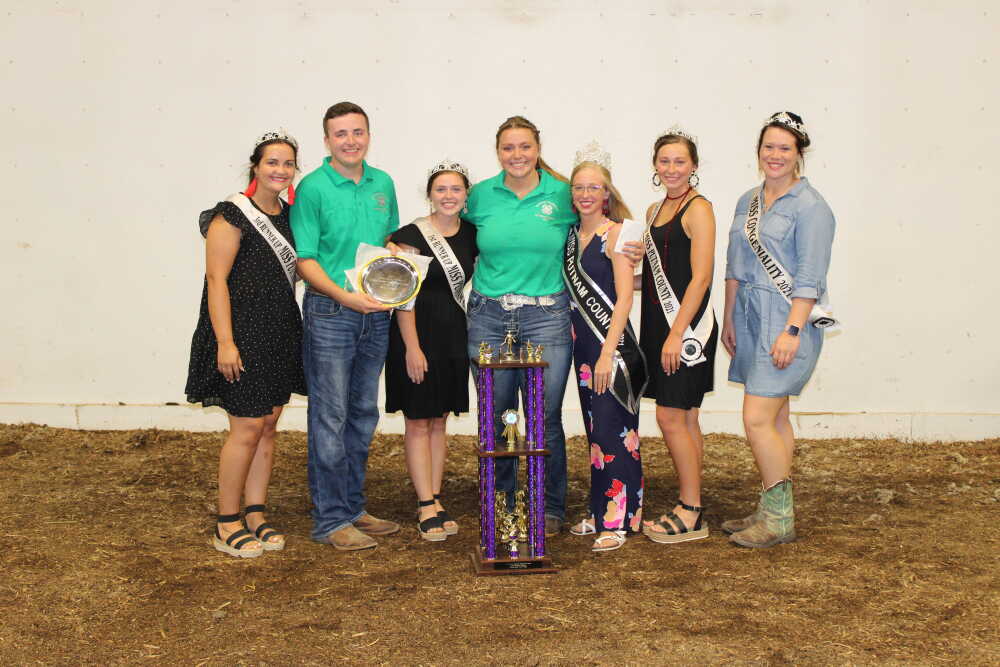 Regardless of what happened on Thursday night, it was Bree Mahoney-Sutherland’s final time in the Putnam County Fair show ring as a 4-H’er.

But, just for good measure, the 10-year member went out and won the whole thing, claiming the 2021 Supreme Showmanship trophy.

Representing the goat barn, Mahoney-Sutherland topped Reserve Supreme Showman Jayden Simpson of the beef barn and a field of five other competitors — Ethan Hamm of the swine barn, Brody Parent of sheep, Joe Kirkham of dairy, Sydney Boswell of horse and pony and Allison Skirvin of llama and alpaca. 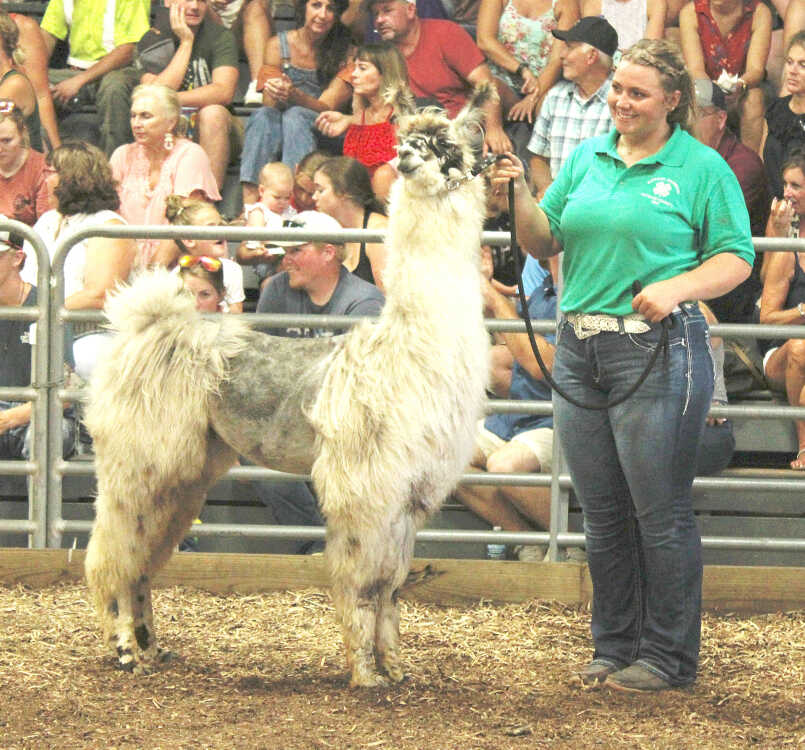 Bree Mahoney-Sutherland came out on top of the seven-person field Thursday night, which included the first time the llama/alpaca project was represented in the round robin format.
Banner Graphic/JARED JERNAGAN

Though Mahoney-Sutherland won the showmanship championship in both the goat and horse and pony barns, she chose to represent goats.

Having gone through the grueling day of showing seven different species of animals and having already heard Simpson announced as reserve champion, Mahoney-Sutherland described what was going through her mind just before her name was announced.

“Honestly, I was worried,” Mahoney-Sutherland said. “Obviously Ethan is an amazing showman as well, and everybody else. So I was definitely worried.”

Mahoney-Sutherland is no stranger to intense competitions. Not only was 2021 her third appearance in Supreme Showmanship — she’s won the showmanship competition in the goat barn the last three years and in horse and pony the last two — but she was also a state finalist in shot put for South Putnam this year and was part of the Eagle basketball program that won three sectional championships in four years.

Still, she remained philosophical about the competition and kept things in the proper perspective.

“It’s my 10th year — I’m done either way,” she said. “There was nothing for me to do this time but enjoy it because it is fun and it is a learning experience. I think oftentimes we forget that it’s not just a cut-throat competition.” 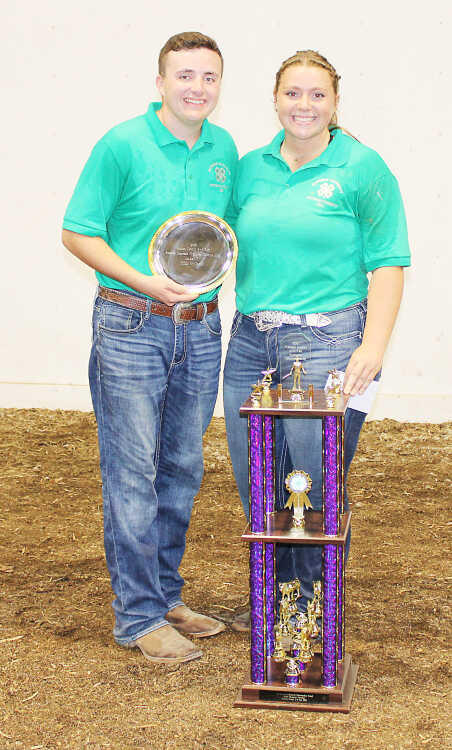 Still, when her name was announced, it brought a lot of joy.

“That was probably one of the best moments of my life,” Mahoney-Sutherland said.

Asked to elaborate, Mahoney-Sutherland, always quick with a smile and a joke, said what was going through her mind.

“Honestly, I really need a shower because there are like five layers of sweat on me and I need a nap and I’m starving,” she said. 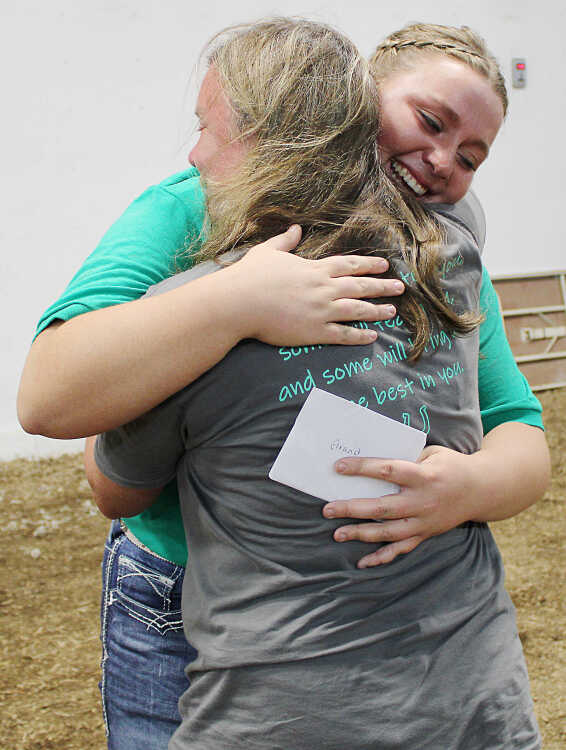 Mahoney-Sutherland then turned more reflective, recalling her dad, Rick, who passed away in May 2018.

“Other than that, obviously I’ve been working for this all 10 years and it was something my dad always wanted me to do,” she said. “So, it was really emotional as well.

“I don’t even know how to explain when all your work pays off.”

Simpson, a ninth-year 4-H member, was pleased with his runner-up performance and hopes for a payoff similar to Mahoney-Sutherland’s next year.

“I am super excited for this tonight,” he said. “This is exactly what I wanted to achieve this year. I have one year left to make it back in this ring like I am tonight and can’t wait to hopefully be where Bree is standing this evening. I’m super excited for Bree.”

Thursday’s competition also made a little bit of history by adding the llama and alpaca project to the round robin. Not only did this bring an extra species into the mix, but it also brought another competitor in the form of Skirvin.

Mahoney-Sutherland said the addition of llamas was not too much of a surprise for her.

“My sister (Shea Mahoney-Sutherland) is on the fair board, so I found out pretty early,” Mahoney-Sutherland said. “I think (Llama/Alpaca Superintendent) Kate Skirvin especially did a great job of introducing us to them and making sure that she helped everyone. Gayle Baugh showed llamas, so she gave me some pointers and tips and a book to help me learn stuff. They were all really supportive. It was different but it was definitely an experience. It was a great time.”

Mahoney-Sutherland’s win also made a smaller piece of history by breaking North Putnam’s stranglehold on the Supreme Showmanship title. North Putnam students or graduates had won the competition for eight straight years dating back to Preston Porter’s 2013 victory. Emily Gilley, also of South Putnam, was the last winner from another school.

Any kind of school rivalries weren’t on Mahoney-Sutherland’s mind Thursday, though. Instead, she was grateful for those who make the fair and the 4-H program possible, thinking not only of her sister and late father, but also mother Erin Mahoney, brother-in-law Jonathan Addler (the goat barn superintendent) and many others.

“I just want to thank the 4-H volunteers,” Mahoney-Sutherland said. “You know how much work they put in behind the scenes. I’ve been raised with four of them at any given time. Everything these people do goes unnoticed. I don’t think they get appreciated enough and putting this on every year, they don’t understand how much they’re impacting our lives.” 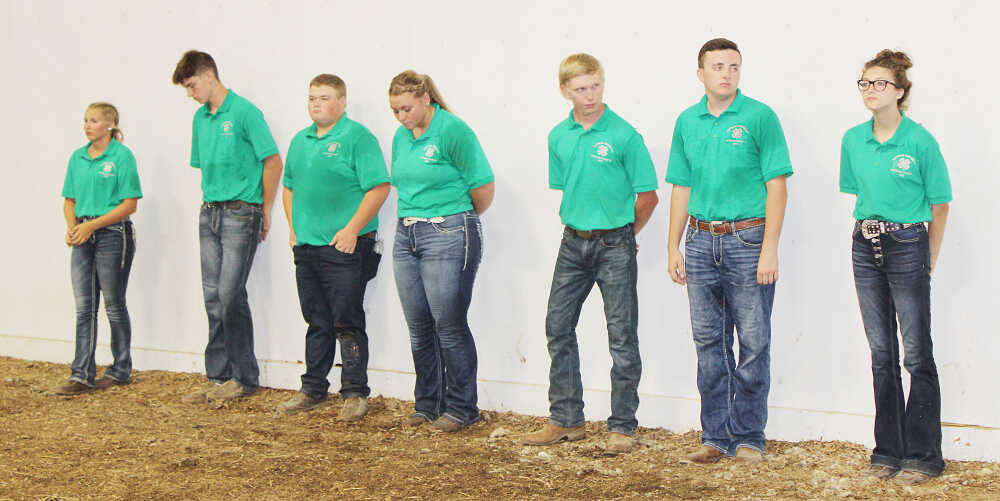