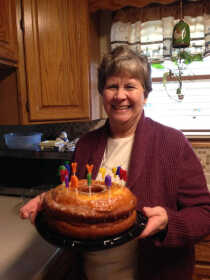 She married DeWayne A. Costin, and he preceded her in death in 2013.

Micky held several jobs over her lifetime, including bookkeeper, lunch lady and bank teller. But the “job” she loved the most was Mom. She reached the pinnacle of that “career” when she was promoted to Grandma. Her grandchildren were her pride and joy.

Throughout her 30-year marriage to DeWayne, she also partnered with him on his successful cattle and cash crop farm, which was always more than just a job to both of them. Micky was known to her friends and family as the “Tupperware Queen,” and she also was an avid gardener, garage saler, recipe collector, stamper, crafter and baker. She was particularly “famous” for her cinnamon rolls, cobblers and homemade doughnuts, which she made each fall for friends and family. Micky also loved Jesus, following him faithfully for decades, and serving Him well by loving and sacrificing for others.

After living in Putnam County her entire life, Micky moved to Frankfort in 2017 following a stroke to be near her daughter, Charity. Eventually, she moved to Wesley Manor for additional care, where she made many friends and enjoyed getting to know the staff. She loved attending the many activities and programs there, and even in her last week of life, when she wasn’t able to participate, she still enjoyed being with the other residents for exercises, crafts and especially Bingo.

She was preceded in death by her parents, husband, stepson Ronald H. Costin, brother-in-law Donald Dorsett and brothers Robert Terry and Steve Terry.

A celebration of life open house will be held at 2-4 p.m. on Sunday, Aug. 8 at the Cloverdale United Methodist Church. Her children invite friends and family to bring photos to show and stories to tell as we gather to remember and celebrate Micky’s life.

The family also would like to extend their deep gratitude to the staff of Wesley Manor Retirement Community and Guardian Angel Hospice for the extraordinary care and compassion over the past weeks and years, and to Whitaker Funeral Home for their kind assistance with the arrangements.

Memorial contributions may be made in Micky’s honor to the Wesley Manor Employee Appreciation Fund, 1555 N. Main St., Frankfort, IN 46041.