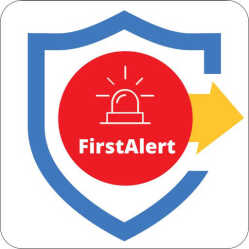 At the touch of a button, FirstAlert communicates the type of emergency and location to the local 911 center. This is so that emergency dispatchers instantly know what type of response is needed and where to send first responders.

The primary emergency systems have been the phones in classrooms and offices. Traditionally, emergency dispatch alerts are generated either by a 911 call or by an automated system like a fire panel. Caliber sought to develop FirstAlert as a supplemental emergency solution, and Putnam County’s schools were partnered as end users during the last stages of its development.

The FirstAlert mobile app, which works on iOS and Android devices, displays a straightforward, intuitive screen with buttons that clearly represent different types of emergencies, including an active shooter, fire and medical distress.

The app also includes an “Announcements” function, as well as silent notifications which instantly connect all authorized users during an emergency. The silent notifications alert staff, while announcements supplement the existing PA system. If the power goes out or the PA system goes down, communication with staff members is still possible using the app.

The app has been set up to provide each school’s details — including its address­ — to the appropriate 911 center.

Working with the Putnam County Safe School Commission, Caliber engineers were able to fine-tune the design for FirstAlert to be a viable tool for all schools and businesses. As such, this is the first county-wide application of its kind.

“It is exciting to have this added ability to connect with first responders in an instant,” the Safe School Commission provided in a statement. “Caliber adds peace of mind, and that extends to staff, students and all of their families.”