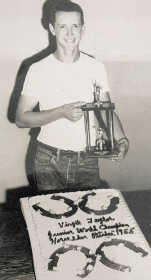 Virgil Burl Taylor Jr., passed away Saturday, Aug. 14, 2021, surrounded by his loving wife of 61 years and four devoted children at the time of his death.

Virgil was a 1954 graduate of Greencastle High School and was an avid horseshoe pitcher.

In 1955, he won the World Horseshoe Pitching Tournament Class “B” and placed 10th in the world competition at Murray, Utah, in 1956, having no trouble whatsoever in topping any opponent he faced. He pitched on television and competed in four world tournaments. He loved talking about his horseshoe pitching days. His father, Virgil Sr. (Burl), was inducted into the Indiana Horseshoe Pitcher Hall of Fame. They would even pitch throughout the winter in Burl’s barn.

After his horseshoe pitching years, Virg enjoyed participating in bowling leagues. He loved spending time with his family.

He worked as a guard for Hoffa Security from 1987-2012 and worked at IBM Corp. from 1955-87 in quality control and card manufacturing.

Virgil was a charter member of Peace Lutheran Church. His faith in Christ Jesus was unwavering and brought him peace knowing that Jesus Christ was his Lord and Savior. His favorite Bible verse was “I am the way, the truth, and the life. No one comes through the Father except through me.” John 14:6.

Graveside services will be held at 11:30 a.m. on Friday, Aug. 27 at the Clinton Falls Cemetery.