A crowd of around 50 women gathered for the recent centennial celebration of Beta Psi chapter of Tri Kappa.
Banner Graphic/JARED JERNAGAN

A lot has changed in the last 100 years, but one thing that has remained the same has been the presence of the Beta Psi chapter of Tri Kappa in the Greencastle community.

The local chapter was installed on March 24, 1921, and the current members celebrated the centennial milestone in July with a gathering at the home of current President Diane Ummel in rural Greencastle.

The day’s speaker was Lauralee Hamilton Foerster, granddaughter of Edith Hixon Broadsteet, who was the very first president of the chapter. 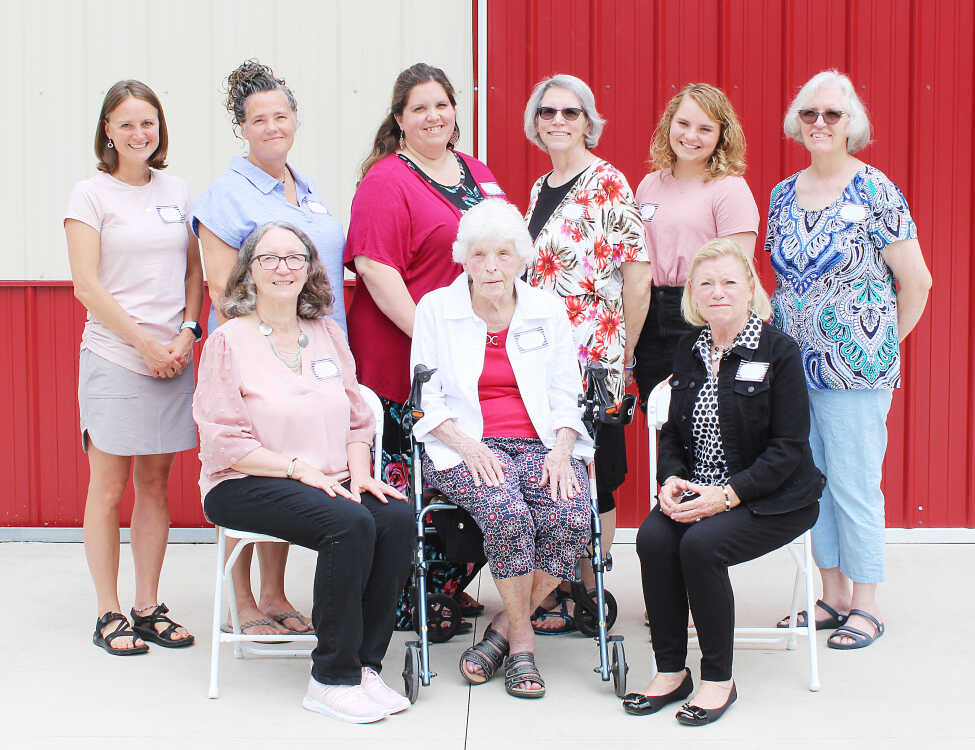 Of special note during the gathering were the four generations of Cathy Walton’s family (at right, front from left) Carolyn McKee, Cathy Walton, Lauralee Foerster —who was like a daughter — (back) Megan Crimmins, Catharine Simmerman, Rachel Smith, Jenni Smith, Abby Simmerman and Ann Tislow. All of the relatives present have been inducted into Tri Kappa.
Banner Graphic/JARED JERNAGAN

The early history of Beta Psi included a variety of fund raisers such as selling Chautauqua tickets, screening benefit picture shows at Cook Theater, and hosting an English Chowder. Proceeds from these projects and others went to philanthropies such as the Central Milk Fund and prizes for solutions to eliminating garbage problems.

More recently, the chapter celebrated the 29th year of Breakfast with Santa in 2020, while also instituting a spring geranium sale in cooperation with the Cloverdale High school FFA.

Art is a main focus of the chapter. Each year Tri Kappa hosts an art award ceremony recognizing one student from each grade within the county schools. Student artwork is chosen by their art teachers, and is then framed, labeled and placed on display within the school. These are visible along the main hallways in many of the schools.

Education is a key pillar of Tri Kappa, and Beta Psi continues to honor top students at GHS each year at their cumulative honors program.

Beta Psi has provided a hospitality suite for the coaches and staff of the Academic Super Bowl held each year at Greencastle High School, as well as providing $100 awards to five seniors at GHS in the areas of choral music, art, drama, instrumental music and journalism.