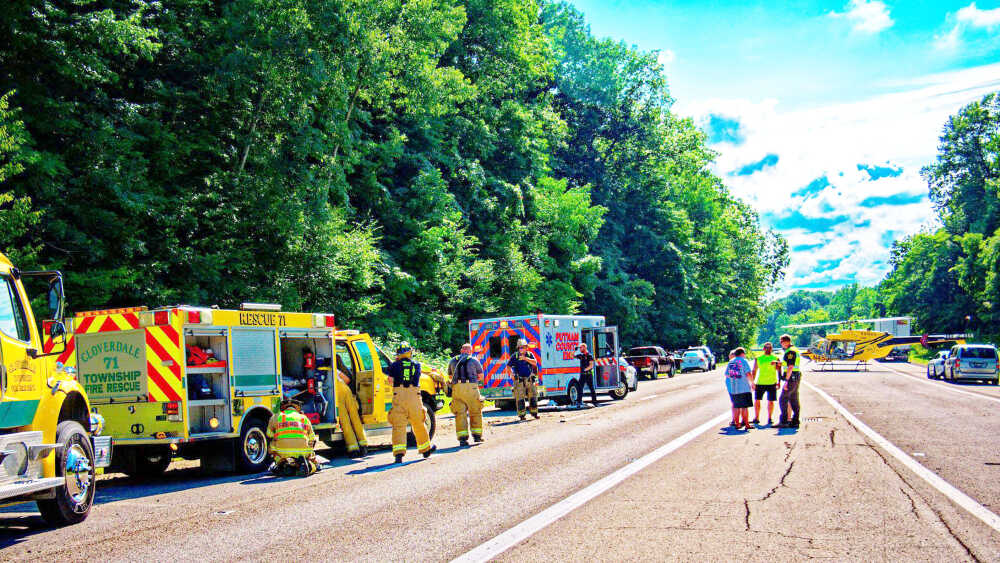 First responders manage the scene of a rollover that occurred on Interstate 70 west of Cloverdale last Friday. Five motorists were injured with one being flown out.
Courtesy Putnam County Sheriff’s Office

CLOVERDALE — Five motorists were injured in a rollover on Interstate 70 west of Cloverdale late Friday afternoon.

At about 4:40 p.m., first responders were dispatched for an accident with injuries near the State Road 243 turnoff along the westbound route. The driver was entrapped while one was ejected from the vehicle, which came to rest in the embankment. The Cloverdale Volunteer Fire Department extricated the driver in about 20 minutes after they and the Putnam County Sheriff’s Office arrived.

The Cloverdale firefighters responded with two engines and a rescue truck. Along with the PCSO as well as the Indiana State Police, Putnam County EMS also responded to the incident with two ambulances.

A StatFlight helicopter was called to transport the driver to St. Vincent Hospital in Indianapolis. As such, both westbound lanes were shut down to allow for a landing zone.

Cloverdale Fire Chief Kerry Shepherd provided to the Banner Graphic Monday afternoon that the driver has been released. Meanwhile, the other four motorists were transported by EMS to Hendricks Regional Health in Danville for their injuries.

The interstate was closed for about 45 minutes, with westbound traffic being backed up and redirected at the Cloverdale exit.