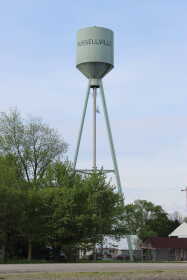 RUSSELLVILLE — Town leaders in Russellville are gearing up for a new effort to replace its dilapidated water tower. The first part is knowing the financial investment the town will incur.

New figures were outlined in a supplemental agreement the three-member council signed off on with Beam, Longest and Neff (BLN) at its regular meeting Wednesday evening.

Brian Bullock, an engineer with BLN who has worked with the town on the project, outlined that the new fees were addendums to the original contract the town signed with the firm. He provided that these were not originally set due to the quick turnaround of the town’s previous proposal.

According to the agreement, the cost for bidding out the construction is $16,400, with right-of-way engineering, which includes legal descriptions and parcel plat costs, estimated at $6,600.

Inspection services would be capped at $42,000, and Bullock stipulated that a Terre Haute engineering firm would be sub-contracted to inspect the tank once it is in the air. Meanwhile, $59,000 would cover the administration of the construction as a whole.

Bullock noted that survey work had been completed and that the design plans were about halfway.

The current water tower was built in 1958. A summary presented by BLN last year noted that many of its components are not up to code, and that a general lack of maintenance has led to its deterioration.

The town is looking to replace the water tower with a new 50,000-gallon unit next to its water treatment plant. The project would include installing new mains into its existing water system, as well as new valves so that leaks can be isolated.

• The council approved two water leak adjustments in the total amount of $220.95.

• The council heard from Tourism Director Eric Freeman about the Putnam County Park Board’s five-year plan. He explained that the board needed input from the community, as the plan will be submitted for grant funding through the state.

• The council gave its blessing for Town Marshal Matt Biggs to acquire a new Motorola radio. Biggs said he did not have quotes yet, but provided that a Motorola, though more expensive, would be more reliable than a Kenwood radio. Older 800 MHz radios will become obsolete due to changes in how they are banded.

Biggs estimated the cost for the new radio between $3,500-$4,000. Clerk-Treasurer Martha Mandleco said there was remaining Coronavirus Aid, Relief, and Economic Security (CARES) Act money that could cover it.

Town Attorney Stu Weliever was not in attendance at the meeting.

By consensus, the council changed its regular meeting next month from Wednesday, Dec. 15 to Wednesday, Dec. 29. The meeting will still be held at 7 p.m. at the Russellville Community Center.