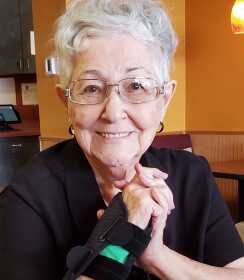 Born Feb. 17, 1927 in Indianapolis, she was the daughter of Franklin Pierce and Rebecca Jane (Foster) Baker.

Martha was a homemaker. Prior to moving to Putnam County in 1956 with her husband, Garald Wayne Starr, they had owned and operated the Fletch Haven Sanitarium in Indianapolis.

She was a lifetime member of Eastern Star and a member of God’s Half Century Sunday School Bible Club at Union Valley Church. Martha was an accomplished artist, having displayed and sold her oil paintings all around Indiana. She was also an avid reader and enjoyed working puzzles.

She was preceded in death by her husband; parents; two sons, David G. Starr and John Starr; and her siblings, Frank H. Baker, Sarah Isabelle Baker and Elizabeth Jane Baker.

Memorial services will be held at 2 p.m. on Sunday, Dec. 12 at the Bittles and Hurt Funeral Home. The family will receive friends from 1 p.m. until time of service at the funeral home.

Memorial contributions may be made in memory of Martha to the Humane Society of Putnam County, P.O. Box 444, Greencastle, IN 46135.