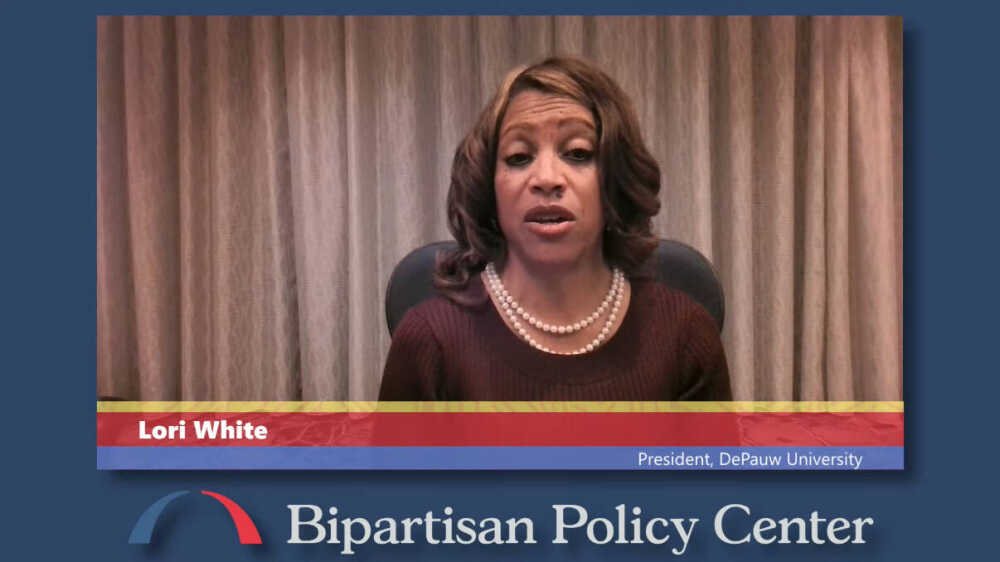 Part of an effort to encourage freedom of expression and diversity, a task force which included DePauw University President Lori White is now calling on college and university campuses to be more open in doing so.

Members of the Academic Leaders Task Force on Campus Free Expression, White and other collegiate leaders released a report Tuesday outlining how such environments could be encouraged and maintained.

The 10-member group was formed through the Bipartisan Policy Center, a Washington, D.C.-based think tank whose mission is merging ideas and leadership from conservative and liberal politics on various issues and to promote cooperation.

It was co-chaired by former Vermont Gov. Jim Douglas and former Washington Gov. Christine Gregoire. For her part, White in effect represented the Midwestern demographic of colleges and universities.

First, colleges and universities should address a perceived tension that contrasts academic rigor with upholding values or policies of diversity, equity and inclusion in an environment for learning.

Second, campuses should act on initiatives which encourage a diversity of viewpoints which may be shared, and to exposing students to ways in which they can affirm or confront those viewpoints.

Third, campuses should adopt policies which protect controversial expression, in which hasty or otherwise overtly disruptive responses to it would be discouraged.

Finally, campus administration and faculty should encourage academic and civic discourse by helping students develop skills and habits which promote an environment for open inquiry and productive debate.

“It was a real gift to be able to engage in dialogue with so many incredible colleagues who represented different perspectives at the university and on the issue of freedom of expression,” White said at first.

Speaking in broad terms, White said the task force wrestled with freedom of expression, as well as diversity, equity and inclusion, as being foundational values. This grounded their deliberations on how they drive interactions on campus.

“I don’t know that everyone thought that was going to be part of our really deep and robust conversation,” White said. “How do we create environments that affirm the right of every member of our community to be, as I always say, their full, authentic selves, and be able to debate and to share and to criticize?”

White contextualized this in still fostering an “affirming community.” This, she said, is where all of its members, especially those who may be historically marginalized, do not feel threatened by anyone who may not agree with, or perhaps dehumanize, how they identify themselves.

Ultimately, White provided, the challenge was articulating in the report how these complex elements of free expression are important in and of themselves, as well as how they are connected.

She outlined that there has been a moving away from intellectual discourse on campuses. However, she noted that the data reinforced for her the role of lived experiences and feelings in terms of people arguing for or against something.

As such, bringing young people who have grown up in homogeneous environments into a collegiate setting — and then automatically expecting them to figure out how to debate difference — hinders students by not giving them a foundation for this discourse.

“I think what’s important is that we need to be able to think about how we introduce these concepts to our students,” she said, “and how we give them the actual tools to engage in the kind of intellectual conversation that we would like to see happen on our college campuses.”

White referenced a recent incident at DePauw in which a professor used the N-word. This was not directed at an individual student, but was articulated in the context of a class discussion. Some students, though, asked White to ban the word on campus.

“There are books that I have read that use that word that I certainly wouldn’t want banned in a classroom,” White said in also applying her response to videos in a classroom or playing rap music. “I also said, however, that the word’s abhorrent; I wouldn’t use it; I wouldn’t encourage others to use it.

“I think that’s an example of ways in which we can convey that there are certain words, phrases, even speakers, that we don’t support, but that we defend the right of the campus to invite the speaker, of the professor to choose particular books and materials, and why all of that is so important.”

White said the report underscores that “this is not easy work.” However, collegiate presidents have to use their “pulpit” and “capital” to model how administrators and campus communities in general respond to tension.

She acknowledged a perspective that the report’s recommendations have to be made to “live,” rather than simply idealized. In the end, it should be about being invited into a space and having a dialogue, and then being able to leave it without feeling personally attacked or ostracized.

“I hope that DePauw can be a role model for that for the community,” White said in comments to the Banner Graphic. “We’re all members of our community, regardless of their background and their political ideology.”

Comments
View 53 comments
Note: The nature of the Internet makes it impractical for our staff to review every comment. Please note that those who post comments on this website may do so using a screen name, which may or may not reflect a website user's actual name. Readers should be careful not to assign comments to real people who may have names similar to screen names. Refrain from obscenity in your comments, and to keep discussions civil, don't say anything in a way your grandmother would be ashamed to read.
Respond to this story