Carols4aCause returns with addition of live event to benefit Beyond Homeless 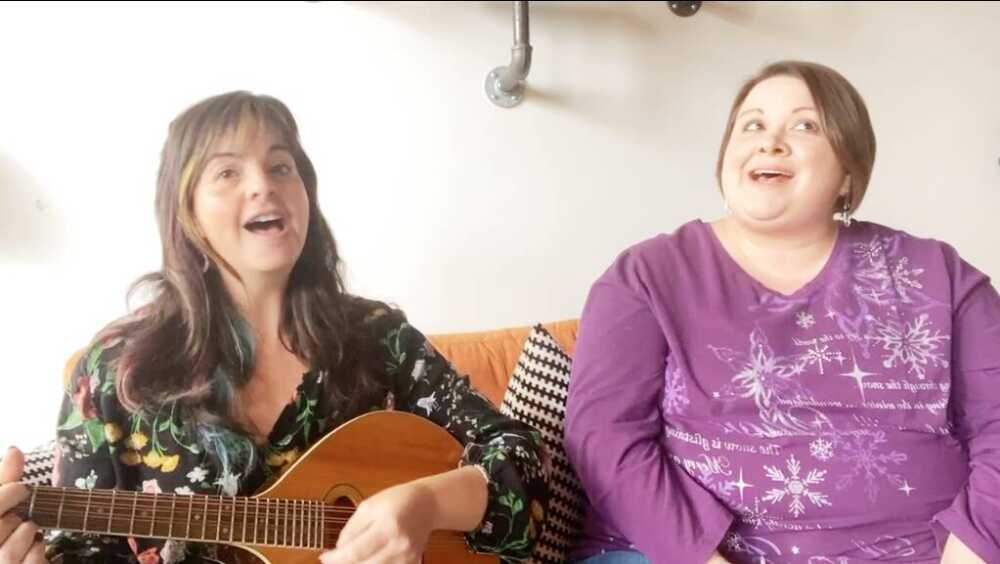 Harmonizing to the holiday favorite “Silver Bells” Thursday morning, Bobbie Lancaster (left) and Hannah Newlin take to Facebook to raise money for Beyond Homeless Inc. under the hashtag #Carols4aCause. The fundraising will continue with more videos through Christmas Eve and even a Dec. 12 live performance at Gobin Church.
Courtesy photo

After raising nearly $9,000 for the local homeless shelter last year, a local musician is reviving an online music series and adding a live element to it this year.

The goals was pretty straightforward — to raise $5,000 through the online tip jar for Beyond Homeless Inc.

It wasn’t just posts of Lancaster and her ever-present mandolin from the comfort of home, though, as she posted from various places around the community and even got other musicians and organizations involved.

This year, she has brought back the online performances, having posted under the hashtag three times as of Thursday evening, with an additional post from Tzouanakis music teacher and First Baptist music director Carrie Hamilton on Thursday evening.

The goal this year is to raise $7,5000 for Beyond Homeless, though organizers would love to exceed the goal once again.

New this year, though, is the addition of the Sunday, Dec. 12 event at Gobin Church, Our Stories: An Evening with Putnam County Songwriters to benefit Beyond Homeless Inc.

“I think what’s cool is this live event is something we couldn’t do last year so it’s a bonus connected to this fundraising campaign,” Lancaster said.

Our Stories will feature original holiday music from a variety of local songwriters, including Black Market Vinyl, Gus Moon, Derek Chastain, Lancaster and Cathie Malach as well as Him & Her.

“In sharing our stories, we’re hoping to promote healing in this season,” Lancaster said.

The suggested donation for the event is $25, but not required.

“I want to be super clear that if you can’t give $25, just give a dollar and just come celebrate with us,” Lancaster said. “If you’ve had a great year, then please give. If you’ve had a tough year, then sit in that pew and know you belong with us.”

Donation forms will be available for those who would like to give a year-end donation and received a tax deduction.

The online tip jar will remain open until midnight on Christmas Eve.

In addition to wanting to reach as many people as possible through the live and virtual performances, Lancaster is still looking to connect with those who may want to take part in the live videos.

Anyone wanting to take a more active role may reach out to her www.facebook.com/bobbie.j.lancaster.

Those more camera shy or musically challenged may also take part by not only considering a donation, but by watching the videos, liking and sharing them with the #Carols4aCause hashtag to help spread the word.