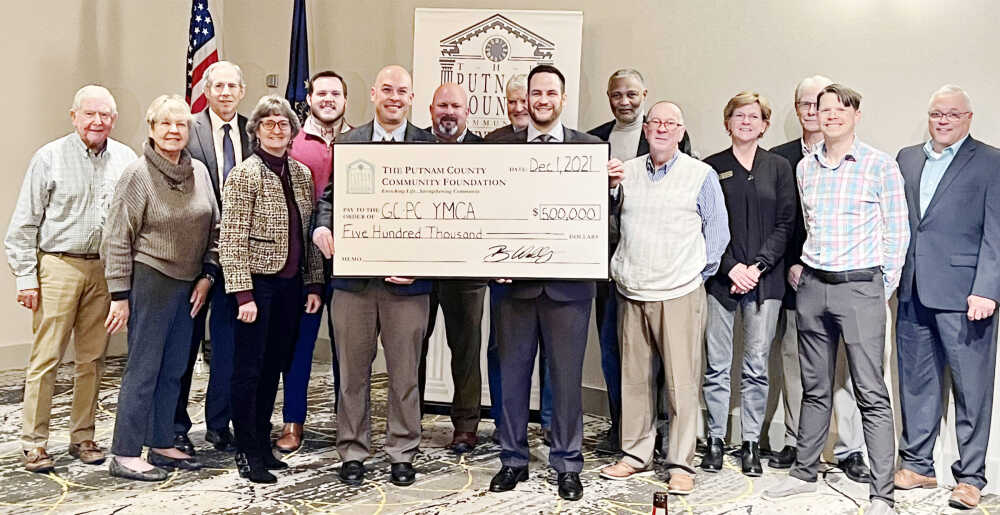 The Foundation helped lay the groundwork for the YMCA’s fundraising campaign with this historic gift of $500,000. With the gift, the Community Foundation has since 1985 awarded more than $18 million to improve the lives of Putnam County residents.

The YMCA board and its Chief Executive Officer Ryan Penrod accepted the grant award at an event for board members of both the YMCA and PCCF.

“I was so excited to hear that the Putnam County Community Foundation was willing to make such a large investment into our future,” Penrod said. “Their investment shows how much they believe in our organization and what the value of having a YMCA in the community means to them.”

“We are so excited to form an ongoing partnership with the Putnam County Community Foundation,” Greencastle/Putnam County YMCA Fundsraising Chairman Rob York said. “During our conversations over the past several months, it became apparent that it was a perfect fit for them and the YMCA.”

The Community Foundation aims to enrich the quality of life and strengthen community, and this grant will do both for Putnam County. The YMCA will bring additional programming for youth activities, fitness and athletic facilities, along with new community spaces for our community members and nonprofits to utilize.

“The Putnam County Community Foundation Board of Directors and staff are proud to announce this historic gift which will help establish a YMCA in Putnam County,” PCCF Executive Director Brandon Wells said. “We are able to make this investment in our community because of the generous, consistent support of our donors throughout our 36 years. We look forward to a fruitful partnership with the YMCA over the coming decades.”

The City of Greencastle, YMCA of Wabash Valley and Putnam County Hospital are involved in the approximately 60,000-square foot project. The city will own the building while leasing the facility to the YMCA and the hospital.

The Putnam County Community Foundation (PCCF) works alongside individuals, businesses and nonprofit organizations to build a stronger Putnam County. PCCF is home to more than 300 charitable funds and has awarded more than $18 million in grants and scholarships since its founding in 1985.

To learn more about the PCCF, visit www.pcfoundation.org or call 653-4978.