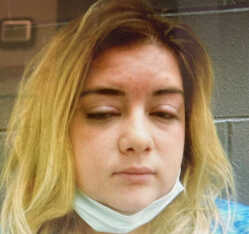 BRAZIL Ś A Greencastle woman was lodged at the Clay County Jail Thursday evening for driving while intoxicated after she tested at five times the legal limit.

Trooper Brown detected the odor of alcoholic beverage coming from the driver, identified as identified as Blaze A. Bottorff, 24, of Greencastle.

Several field sobriety tests were administered and Bottorff failed each test. Bottorff was then read implied consent by Trooper Brown, in which she agreed to take a certified chemical test.

Upon arriving to Clay St. Vincent Hospital, Bottorff was administered a certified chemical test, which showed that she had a blood alcohol content of .40 percent. The legal limit to operate a motor vehicle in Indiana is .08 percent.

Due to her high level of alcohol, Ms. Bottorff was required to wait for medical clearance from a doctor. Once Bottorff was medically cleared, she was placed under arrest and taken to the Clay County Jail where she was being held on bond as of Thursday morning.