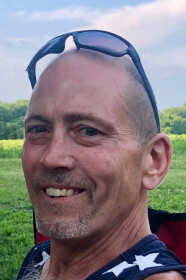 Born July 10, 1963 in Indianapolis, he was the son of Joseph Paul and Bonita (Doty) Blake and was a 1981 graduate of South Putnam High School.

Mark prided himself on his strong work ethic. He worked at Buzzi Unicem (Lonestar) for 30 years. His previous jobs included being the general manager for Ponderosa in Terre Haute and Jasper and for McDonald’s in Cloverdale, Greencastle and Terre Haute.

Mark was a devoted husband for more than 32 years to Sue Blake. Together, they raised four children, and his six grandchildren were the light of his life.

Over the past few years, Mark regularly attended Greencastle Christian Church. He was a member of Abundant Life Baptist Church and was instrumental in developing and directing the Wednesday night dinners.

Mark enjoyed sports and was a big fan of the Indiana Pacers, Indianapolis Colts and Chicago Cubs. He played on the Putnam County softball league, but you could also find him shooting hoops on local basketball courts. He was an active outdoorsman and loved spending time outside. He was happiest mushroom hunting in the woods and lounging on the white sand beaches of Florida.

He was preceded in death by his parents and a brother, Ed Blake.

A celebration of life will be held for Mark at 6 p.m. on Wednesday, Dec. 29 at Hopkins-Rector Funeral Home, Greencastle

The family will receive friends from 4 p.m. on Wednesday until time of service at the funeral home.