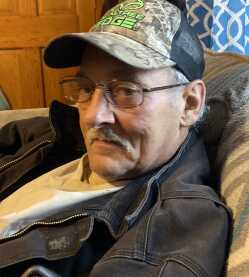 Elmer “Eugene’ Burnett, 60, of Brazil, peacefully fell asleep in death on Jan. 20, 2022 at home in Brazil, surrounded by his loved ones (present with him and on the phone). He was lovingly cared for by Kindred Hospice of Terre Haute.

He was preceded in death by his father, Elmer, brother Wayne and nephews Steven and Andrew. Also by his award-winning coon dogs, Burnett’s Red Ginger and Burnett’s Red Rocky.

He is survived by daughter Nikki Church and son-in-law Thad of Brazil; mother Lou Burnett of Fillmore; grandchildren Amelia, Arleigh, Nathan and Mea; grand doggers Callie, Briggs, Bella, Daisy, Ruby and Romeo; siblings Janet Kennedy of Cunot, Steve Burnett and wife Sara of Rockville and Sheryl Bradford of Campbellsville, Ky. Uncle Blue Gene was also survived by seven nieces, three nephews and several adopted nieces and nephews, plus more family, adopted family and friends that meant so much to him.

Cremation was entrusted to Samaritan Funeral Home. There will be no services at this time. A celebration of life will be set at a later date.

In lieu of flowers, donations can be made to his daughter, Nikki, to assist with funeral expenses and the celebration of life.

Online condolences may be made at this time to www.samaritanfunerals.com and www.everloved.com/life-of/elmer-burnett/.