County digs out from winter storm 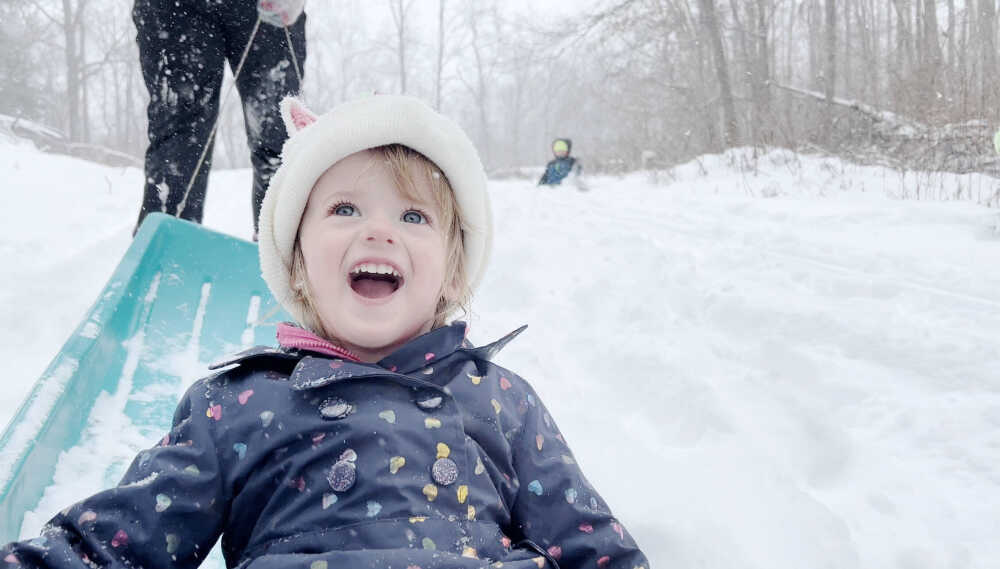 The first major winter storm of the season presents a variety of experiences across the county, including the wonder in the eyes of one-year-old Bethany Amos as she takes her first sled ride.
Courtesy photo/ADAM AMOS

It could have been a whole lot worse.

That is the prevailing sentiment after a winter storm dumped 6-7 inches of snow on Putnam County between Wednesday evening and early Friday morning.

Yes, travel was extremely treacherous at times, but folks largely stayed off the roads. 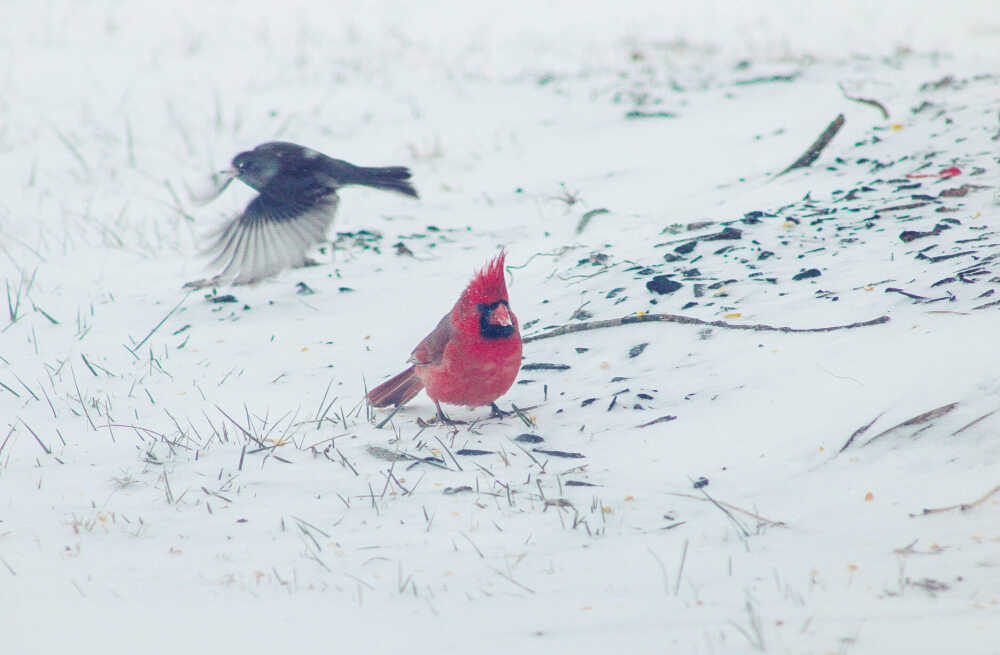 The snow also brings the quiet beauty of nature, as two birds forage for food through the fallen snow.
Banner Graphic/KARLY HUDSON

Sure, the six inches of snow measured by Severe Weather Specialist Chris Edwards are nothing to sneeze at, but not too far to the north, accumulation was much higher. Move to Southern Indiana and there was much more ice.

Even with reports of seven inches of snow in Reelsville and Bainbridge, as well as much higher drifts in open parts of the county, on the whole, it wasn’t the weather event it could have been.

Dave Costin, who serves as director of both Putnam County 911 and Emergency Management Agency, reported 23 property-damage accidents between 5 p.m. Wednesday and noon Friday, two of them personal-injury crashes, as well as 14 slide-offs. 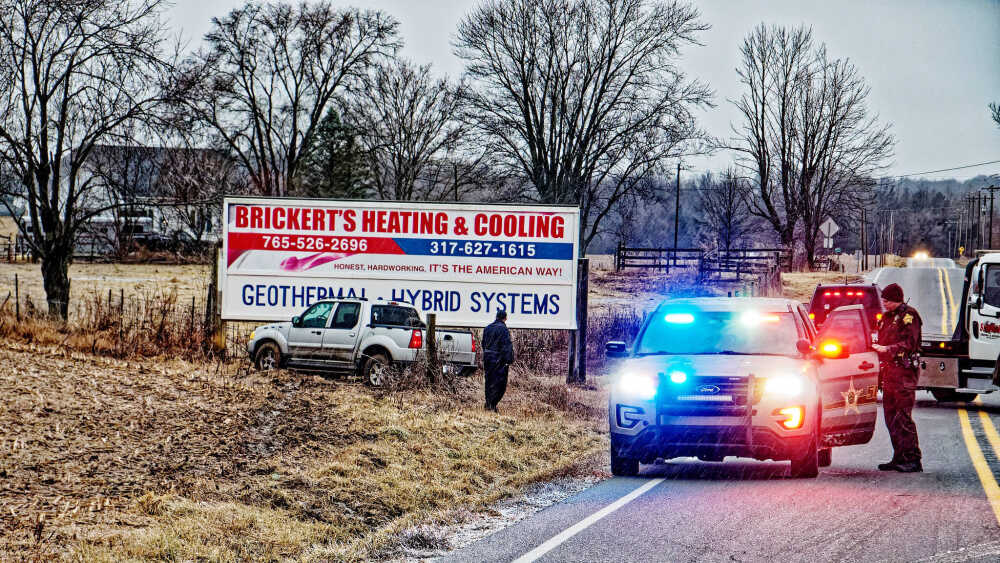 While wrecks were kept to a minimum under the circumstances, there were frustrations for police, such as yet another slide-off on State Road 240, one of two that Reserve Deputy Joe Tesmer worked in a 30-minute period at the same location on State Road 240 as the roads turned icy Wednesday evening.
Courtesy Putnam County Sheriff's Office

“I’ve seen as much as 20 an hour on bad days, so to have a little more than 20 over a 40-hour period isn’t too bad,” Costin said. “I would say the citizens of Putnam County did an excellent job of giving us a chance to clear the roads and get things safe.”

Costin said there was a surge over a 12-hour period on Thursday that accounted for approximately half of the local crashes, but things curtailed once word got out that the county had gone to a Travel Warning, the most serious level of travel status recognized by the Indiana Department of Homeland Security, as of 4 p.m. Thursday.

The lowest level of local travel status, advisory means that routine travel or activities may be restricted in areas because of a hazardous situation and individuals should use caution or avoid those areas.

The biggest reason for such a reduction is the work of road crews, which were out throughout the event, but really began to make headway early Friday, once the snow had stopped falling.

Reader-submitted photos of the winter storm

Speaking to the Banner Graphic from a road grader, where he was among the many Putnam County Highway Department employees responding to the event, interim Superintendent Clint Maddox said it was basically “beating our heads against the wall” until Friday morning.

“We’ve been out 24/7 but with the constant snow and wind, it was a constant battle, kind of like clocking in at the Alamo,” Maddox said. “We’re making some headway today (Friday). We’ve had all our trucks — 15 trucks — out every day and then a smaller crew at night.”

Maddox was happy with the potential he saw on Friday, with no more snow falling and the sun out.

“Today will make a huge difference and I suspect we’ll work Saturday,” he said. “That should clear up things for the most part. There may be a few spots that were missed inadvertently or were blown back in after we went through. Everybody should have a way home.”

The response from the Greencastle Department of Public Works (DPW) has been similar, where Superintendent Brad Phillips was among those working overnight on the rotating 12-hour shifts the city, like the county, has employed.

“For the most part the last couple of days have been mainly plowing and treating intersections and hillsides,” Phillips said. “Last night (late Thursday/early Friday) we started making some progress after the snow stopped. We do have a lot of the main roads showing some to a lot of pavement, but with anything that stays wet at this point will refreeze.”

Phillips added that the Friday afternoon/evening crew would be plowing off slush and working on secondary roads. He acknowledged that this job will be a long haul, with temperatures staying low.

“We still have a ways to go with the temperature staying below freezing,” Phillips said. 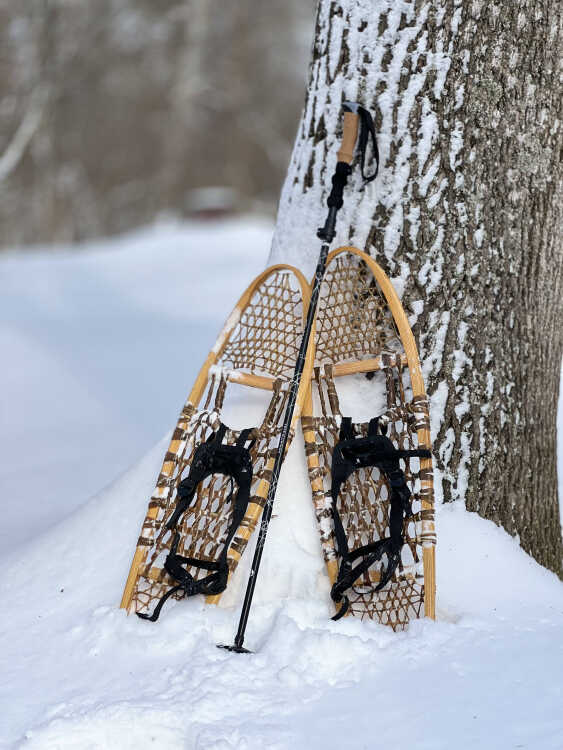 For all the inconvenience it brought, this week’s winter storm also carried with it plenty of beauty, from snow shoes ready for a jaunt in western Putnam County...
Courtesy photo/JOANNA BEASLEY SUITORS

Mayor Bill Dory added that in addition to DPW, it has been all hands on deck, with Parks and Recreation workers clearing city parking lots and crews from Forest Hill Cemetery adding to the effort.

“As needed, folks have been pitching in as much as they can,” Dory said.

Of course, local crews are not alone in their response. Statewide, the Indiana Department of Transportation had nearly 1,000 yellow trucks out during the worst of the event, with between 125 and 130 of those in the West Central District that includes Putnam County. 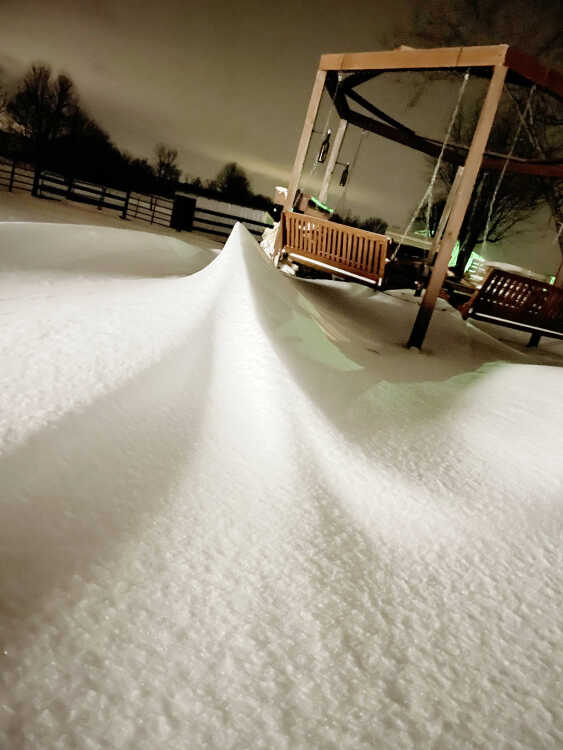 ..to backyard drifts on the plans near Barnard...
Courtesy photo/LANA CHINN

The worst of it was as snow continued to fall and blow, causing drifting, which Costin called a “big challenge.”

Even as officials prepared for the worst, it didn’t come to pass. Warming stations were established in the lobby of Putnam County Regional Airport and Putnam County Hospital, but there was only one power outage that last a few hours, so a larger-scale shelter was not necessary. 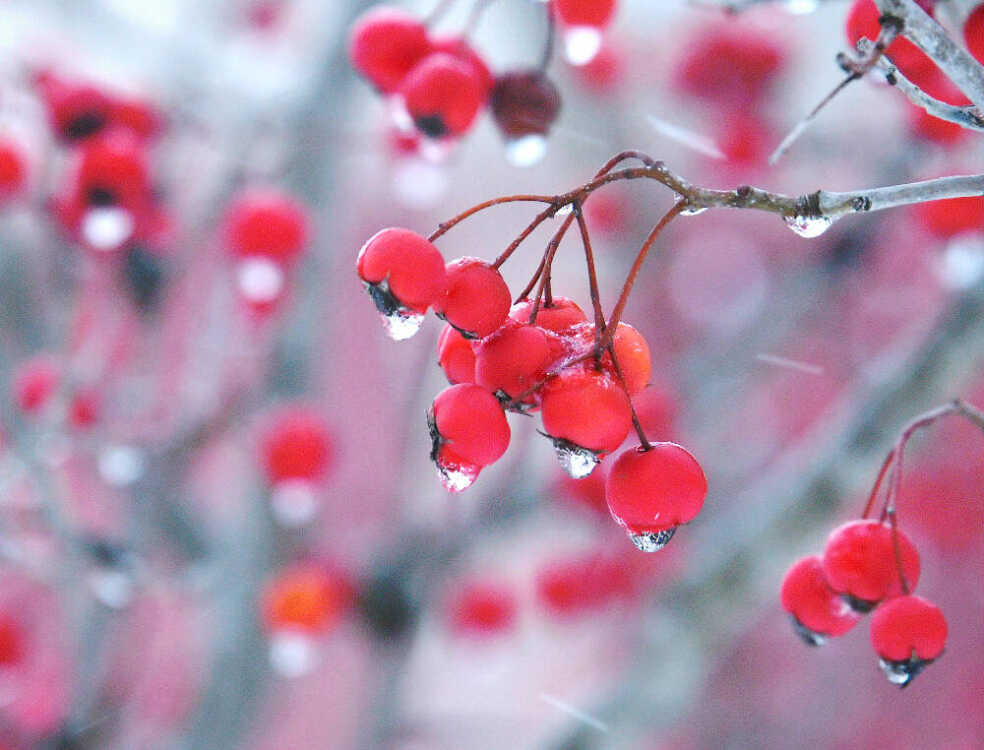 ...to berries interacting so beautifully with the snow and ice in Greencastle.
Courtesy photo/MARILYN CULLER

Additionally, the EMA CERT team was on standby, but was never needed to set up a shelter or transportation.

Ultimately, the biggest challenge for law enforcement came down to the few drivers who decided to risk it.

“We worked a fair amount of slide-offs,” Putnam County Sheriff’s Office Cpl. Scott Ducker said. “They were definitely concentrated at a few areas — State Road 240 east of the animal shelter, U.S. 231 at the hill just north of U.S. 40 and Manhattan Road — mostly from overconfident and/or under-prepared drivers.”

This ranged from four-wheel drive vehicles running off the road to small passenger cars that lacked the traction needed for the conditions.

“Overall though, I would say a plethora of our citizens heeded the warnings and stayed off the roads,” Ducker concluded. “Traffic was very light outside of the towns. Compared to last year’s storms, we worked far fewer actual traffic crashes.” 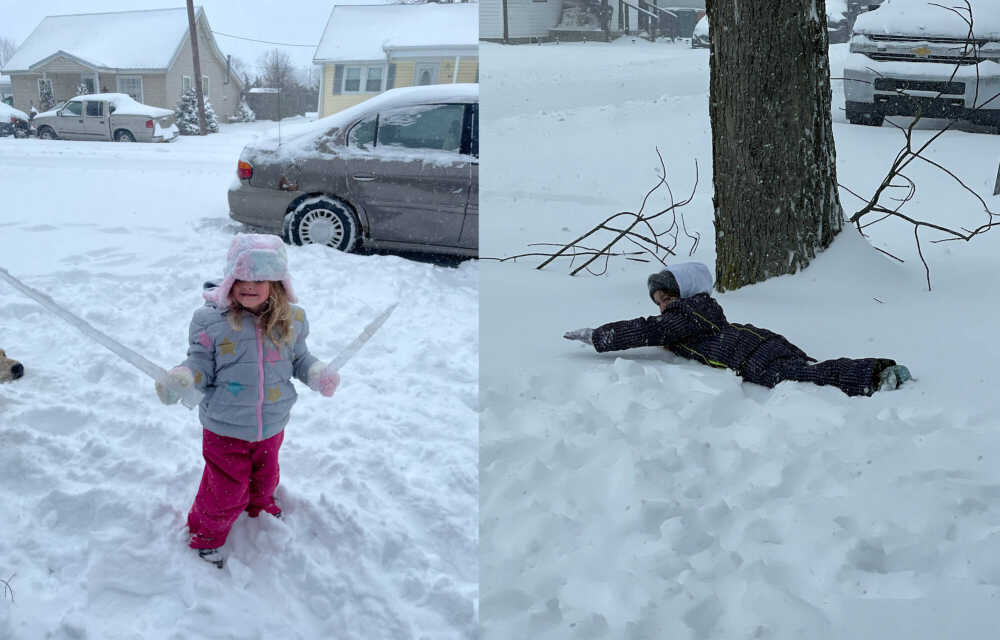 Georgia and Karlee enjoy an eLearning/snow day in Roachdale on Thursday.
Courtesy photos/KELLY ROBERTSON
Comments
View 4 comments
Note: The nature of the Internet makes it impractical for our staff to review every comment. Please note that those who post comments on this website may do so using a screen name, which may or may not reflect a website user's actual name. Readers should be careful not to assign comments to real people who may have names similar to screen names. Refrain from obscenity in your comments, and to keep discussions civil, don't say anything in a way your grandmother would be ashamed to read.
Respond to this story