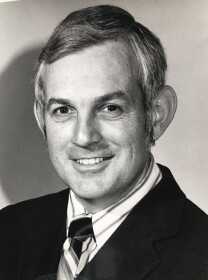 Born to Herbert and Charlotte Aikman, Pat grew up in Dana, Ind., and graduated class valedictorian of Dana High School in 1953. He enrolled at DePauw University, where his interests in journalism and sports information flourished and became lifelong pursuits. He was the sports editor and later the editor-in-chief of the school newspaper. He loved attending sporting events there and rarely missed a basketball or football game. His college years were the beginning of a lifelong devotion to and advocacy for his alma mater.

After graduating, Pat married DePauw classmate, Judy Aikman, and moved to Scotland, Ind., where Pat was a high school teacher and basketball coach. In 1960, Pat and Judy returned to DePauw, where he became director of the news bureau and sports information and later, director of public relations. A tireless promoter of DePauw, Pat and three fellow alums produced the beloved “Ballad of the Monon Bell,” celebrating the century-old football rivalry between Wabash and DePauw. Whether speaking to local and national media about the benefits of a DePauw education or swapping DePauw stories with a fellow alum, his commitment to the university was evident throughout his life.

After DePauw, Pat joined the Indianapolis Star as director of the Indiana-Kentucky All-Star Basketball series. For 20 years, Pat crisscrossed the state innumerable times, watching hundreds of high school basketball games, seeking to identify the state’s best players. While celebrating their accomplishments and winning reputation on the court, he knew and supported these athletes as individuals and remained connected to them for decades after the games. Pat was proud these games also benefited a broader audience. Since their inception in 1939, the games have raised several million dollars for nonprofit organizations throughout Central Indiana.

Following the Star, Pat worked for the IBCA (Indiana Basketball Coaches Association), which honored him by creating a scholarship in his name, the Pat Aikman Character and Leadership award. The award is given to students who excel on and off the basketball court and who plan to pursue careers in journalism and sports management. Since 2011, 33 students have been awarded this scholarship. Pat was inducted into the Indiana Basketball Hall of Fame in 2008 and awarded the Sagamore of the Wabash in 2002 by Indiana Gov. Frank O’Bannon for his service to the state of Indiana.

In 2008, Pat suffered a debilitating stroke, which changed the course of his life, but did little to diminish his passion, energy and enthusiasm for life.

Pat had a kind and gentle soul, a quick wit and terrific sense of humor. He loved to travel, garden, dance and meet and talk with people wherever he went. He was a voracious reader, especially of the daily newspaper. He was a photographer, a poet and a gifted wordsmith. He used his words and writing to promote worthy causes, to connect people and institutions and to celebrate and honor the people that he loved.

A service and reception to remember Pat will be held on the DePauw campus in May 2022. Further details to be announced.