Officers from the Greencastle Police Department and Putnam County Sheriff’s Office search the Putnam County Courthouse lawn following a report of shots fired Thursday. The source of the issue was found to be a rock thrown through a window, though officers such as GPD’s Darrel Bunten (below) were not taking any chances.
Banner Graphic/JARED JERNAGAN

A man has been detained and is being evaluated following an initial report of shots fired at the Putnam County Courthouse Thursday afternoon. 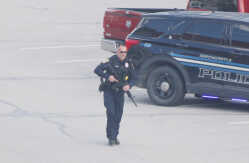 Investigators ultimately determined that a rock thrown through a window of the Putnam County Auditor’s Office was the source of the issue.

Police are not currently identifying the subject, as the incident is being treated as a mental health issue.

Greencastle Police Chief Tom Sutherlin told the Banner Graphic the incident began with the man creating a disturbance inside the Courthouse, for which he was forcibly removed and locked out.

Shortly thereafter, he allegedly threw a rock through a second-story window near the northwest corner of the building. The rock was found inside the Auditor’s Office, along with a broken window and glass fragments on a desk.

No one was hurt in the incident.

However, multiple police officers, only knowing the nature of the initial call, converged on the area around 3:40 p.m.

Officers searched the area with rifles drawn before a report came in of a male person of interest several blocks north.

“The person of interest was found in the 1000 block of Shadowlawn,” Sutherlin said, indicating the man was located in his own garage.

Officers responded to that address, with an officer indicating the man was in custody as of 3:48 p.m.

Putnam County EMS later transported the man to Putnam County Hospital, where he remained more than two hours after the incident, being evaluated for a possible mental health issue.

The Putnam County Sheriff’s Office later reported the man had been booked in the Putnam County Jail on various charges, including resisting law enforcement and disorderly conduct.

While the incident proved not to be as scary as initially believed, Sutherlin had high praise for the coordination between Greencastle Police, the Putnam County Sheriff’s Office, Cloverdale Police and DePauw Police.

“It was a very good response with multiple agencies responding to the call. It was quick,” Sutherlin said. “It’s always a little chaotic when you get that type of call, but everybody worked well together and got the situation under control.”