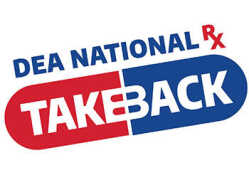 This Saturday, April 30, the Drug Enforcement Administration (DEA) is sponsoring the 22nd nationwide “Prescription Drug Take Back” initiative. Putnam County residents will have two locations at which they can dispose of such items.

Collection sites will be set up across Indiana and nationwide for expired, unused and unwanted prescription drugs, which will be properly disposed of without threat to the environment. This program is for liquid and pill medications. Vaping pens without batteries and vaping cartridges will also be taken. Needles, new or used, will not be accepted for disposal.

Here in Putnam County, residents who would like to dispose of their prescription medication may visit either the Greencastle Police Department at Greencastle Middle School or the Indiana State Police Post on U.S. 40, across the road from Putnamville Correctional Facility.

Both drop-off sites will be accepting medications from 10 a.m.-4 p.m.

This initiative addresses a vital public safety and public health issue. Unused or expired medication in home cabinets is highly susceptible to theft, misuse and abuse. Rates of prescription drug abuse in the U.S. are alarmingly high, as are the number of accidental poisonings and overdoses due to these drugs. Studies show that a majority of abused prescription drugs are obtained from family and friends, including from the home medicine cabinet.

In addition, Americans are now advised that their usual methods for disposing of unused medicines — flushing them down the toiler or throwing them in the trash — pose both safety and health hazards.