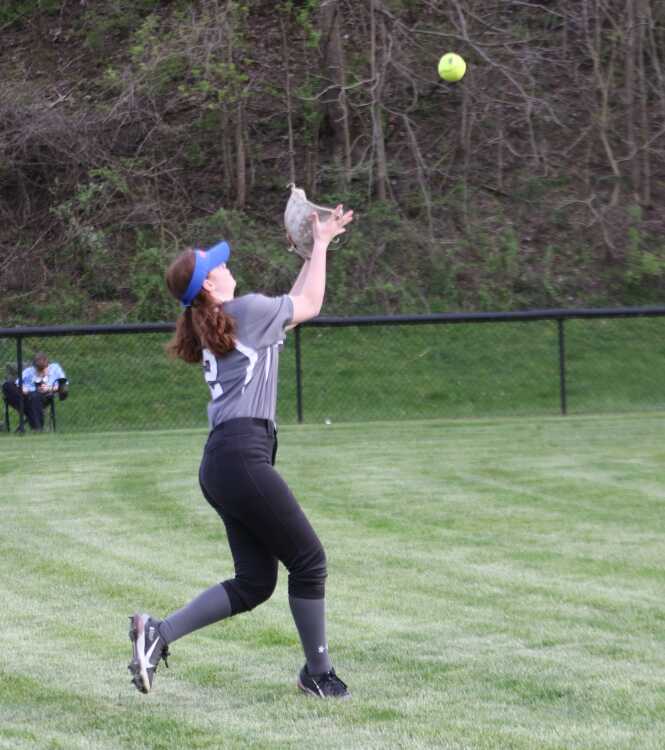 Greencastle right fielder Emma West runs in to snag a looping fly ball during Wednesday night's WIC softball game against Owen Valley. West added three hits, including a double, and drove in a run in the 7-4 loss to the Patriots.
Banner Graphic/TRENT SCOTT

The Patriots got rolling early, scoring two in the top of the first. A leadoff walk from Kaylin Greene started it off and Taylor Monroe would drive her in with an RBI triple. Monroe would later score on a wild pitch to make 2-0.

Things were quiet until the fourth. Owen Valley would plate three in the top half. Another leadoff walk to Lucy Dyer and a single for Greene set the inning up. Hailey Beuerlin brought them home with a two-run single. Andi Burkhart later drove in Beuerlin with a single to right.

Greencastle answered in the bottom half. Three consecutive hits got them on the board. Emma Hunter singled, Emma West drove her in with a double and Makenzie Epley brought home West with a single. Epley would then score on a double from Raigan Chavez to make it a 5-3 game.

The Patriots would tack on one in the sixth when Beuerlin drove home Monroe. They would add two insurance runs in the seventh. Greencastle scratched out one more run in the sixth as Elise Lausee drove in Chavez, but could not muster any more offense after that.

Greencastle falls to 5-8 on the season, while the Patriots are now a stellar 10-1. The Cubs and Patriots each pounded out eleven hits in the contest. Abby Mc Donald picked up the win for Owen Valley. Evelyn Briones took the loss for Greencastle.

The Tiger Cubs will try to right the ship Saturday as they host North Montgomery.