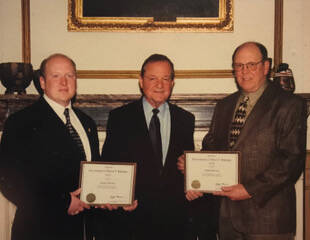 What kid doesn’t want to grow up to be like his dad? How much more so if your dad is something cool like the county sheriff?

With a Republican primary victory behind him, Jerrod Baugh is on the verge of following in his father’s footsteps, as the late Jim Baugh spent two terms as Putnam County Sheriff in the late 1970s and early 1980s.

The junior Baugh has countless stories of he and brother Jason “growing up in jail,” as those were the days when the sheriff’s wife was the jail matron, and the family actually had a residence inside the old jail in downtown Greencastle.

He also heard plenty of stories about his dad while on the campaign trail these last 11 months.

“People would come up and say, ‘We’re supporting you because of your dad.’ And I’d say, ‘Well, that’s the main reason I’m running — I want to follow in his footsteps,’” Jerrod recalled. “And they’d say, ‘Yeah, but can I tell you a story about your dad?’ And I said, ‘Please.’”

There was a storry of Jim Baugh going on a death notification and staying for four hours until the family basically insisted that he leave, just to make sure they were OK following a tragedy.

There was another story of what appeared to be a simple car-vs.-deer crash.

“A woman got in a car-deer crash and she said, ‘I gotta be at the Montgomery County Hospital for a shift, I’m a nurse,” Jerrod recalled. “And he said, ‘Well, get in.’

“I’m sure it was the fastest ride she’d ever had to Montgomery County Hospital from Putnam County,” he added with a laugh.

For Jerrod, the best thing about these stories was that he got to share them with his daughter Gayle, who was just two years old when her grandpa died.

Gayle would come home from college at Vincennes University, and her dad believes there were a minimum of 20 instances of her hearing such stories about her grandpa.

“It was very cool because they would tell the story and my daughter got to hear those,” Jerrod said. “About halfway through those, she said, ‘Man, there’s a lot of people that liked Grandpa.’”

Apparently they like Dad as well. Come November, we’ll all learn exactly how much.