U.S. 231 to get attention even prior to this summer’s major rebuild 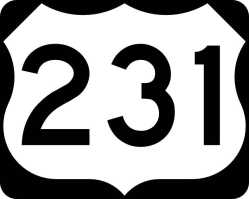 Beginning Monday, May 9, the Indiana Department of Transportation (INDOT) plans patchwork repairs to U.S. 231 through Greencastle.

Although work on a major rebuild of the highway is expected to start August or early September, patchwork repairs to some of the worst sections of pavement will be undertaken between 7:30 a.m. and 4:30 p.m. Monday, May 9, weather permitting. There is a possibility the work could continue into Tuesday, May 10.

The work will start at Frazier Street on U.S. 231 and end at the intersection of U.S. 231 and 240 (Veterans Memorial Highway). Appropriate signage will be placed throughout the project to alert motorists of any changes.

Meanwhile, bids are due June 15 on the major INDOT project on U.S. 231 in Greencastle. Work is expected to start this summer on the Bloomington Street section of the work from Washington Street to Veterans Highway, INDOT has announced.

The state project is undertaking the patchwork effort regardless of the planned work this summer, Mayor Bill Dory noted, as some of the pavement is “bad enough they have to do some patching.”

“It’s not going to amount to much,” the mayor suggested. “They’re going to do the whole thing in one day, so they won’t be doing much more than patching. They may have to dig out a few places.”

Washington Street conditions are’ bad, the mayor conceded, and “a couple place along Bloomington are bad, I ran into those the other day.”

Some sections are eventually going to require “full-depth repairs,” he noted, adding that “certainly all of this rain is not helping.”

Less construction is likely necessary on the Bloomington Street end of the major project, which is why INDOT is starting there.

The section though downtown Greencastle is going to be more intense, require more design and possible right-of-way acquisition. It includes replacement of the main city waterline as part of the second phase of the state-administered project.