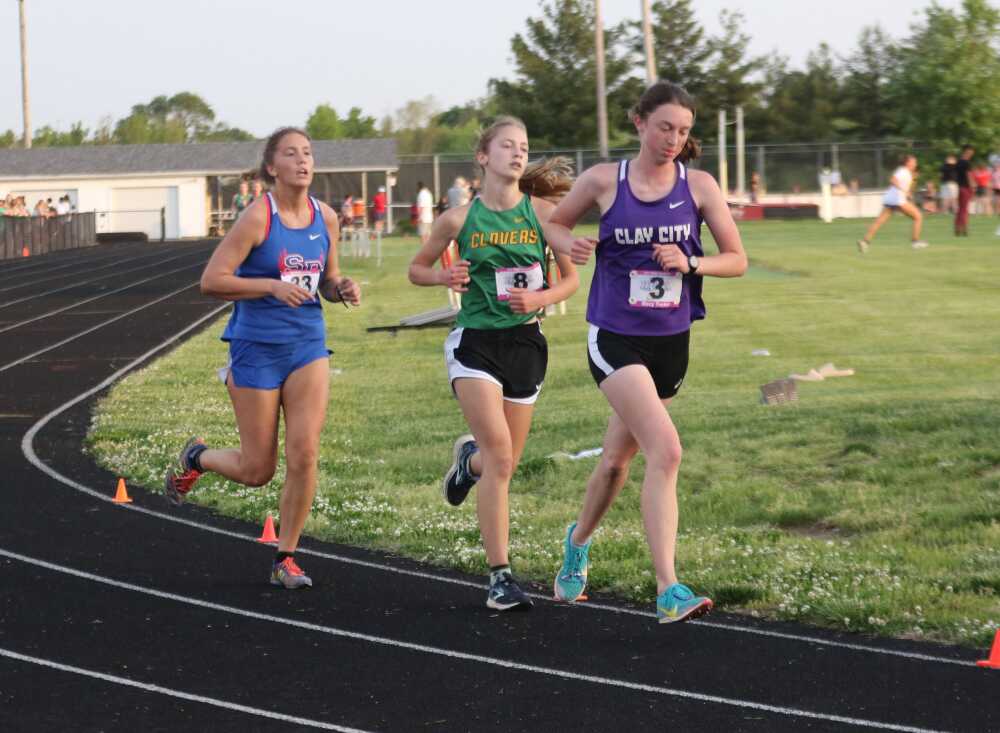 Cloverdale's Ella Szczerbik and South Putnam's Sarah Jones tail Clay City's Macy Tucker during the 3,200-meter run at Tuesday night's Terre Haute South Girls' Track Sectional. Szczerbik would qualify for next week's regional at Bloomington North with a third-place finish behind Tucker in 12:33.48 while Jones was among the next best four times among the sectionals, finishing fourth in 12:38.89, while also finishing third in the 1,600-meter run to qualify for next week's regional in two events.
Banner Graphic/TRENT SCOTT

The hosts cruised to a team sectional title on 144 points with Northview second on 109.5 points and crosstown rivals Terre Haute North third on 99.5 points.

Greencastle was top of the county schools on 35 points, one point behind Clay City and two ahead of South Putnam. Cloverdale finished tied for ninth with North Central on 18 points while North Putnam finished 12th on eight points.

Eagle sophomore Bailey Brickert finished as runner-up in the 100-meter hurdles for a second-straight year, bested by North Central’s Kathryn Ison but sealing passage to the regional with a time of 15.99.

Three other runners also qualified for the regional with third-place finishes as fellow Eagle Sarah Jones finished the 1,6000-meter run in a time of 5:41.78, Greencastle’s Susanna Akinwole ran a 27.82 in the 200-meter dash and Cloverdale’s Ella Szczerbik ran 12:33.48 in the 3,200-meter run.

Two field event athletes also qualified as Tiger Cub sophomore Kylee Owens grabbed third place in the high jump with a clearance of 5-00 while North Putnam sophomore Olivia Stewart finished third in the discus with a throw of 92-02.

In addition, five other events were in a position to qualify as being among the four best times to complete the field of 16 at the regional next week.

Place finishers for North Putnam included eighth-place finishes for Jacy Huffman in the 1,600-meter run in 6:11.20 and Saylor Carrell in the high jump with a clearance of 4-08.