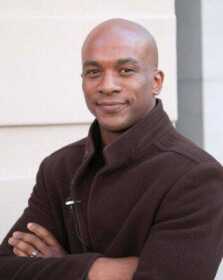 A 1998 DePauw University graduate will give the commencement address to the Class of 2022 at his alma mater Sunday morning.

Jon Fortt, now an anchor at CNBC and a veteran journalist who covers technology, will deliver the keynote address at 10 a.m. on East College lawn.

Tickets are not required for the outdoor ceremony, which is open to the public. Inclement weather tickets to move the ceremony to the Lilly Center will be issued to graduates. The weather forecast currently calls for a 60 percent chance of rain.

One of three persons scheduled to receive an honorary degree during the DePauw ceremony is Kelsey Kauffman, a noted Greencastle activist who has focused her attention on improving the lives of prison inmates and also in local redistricting based on equality and deviation of population.

A former part-time university studies professor, Kauffman will be awarded an honorary doctor of public service degree on Sunday.

Commencement speaker Fortt, who started his reporting career at The DePauw student newspaper, was an English writing and a media fellow at the university.

“I’m honored to address the Class of 2022 at an institution that has meant so much to me,” Fortt said. “DePauw molded me in many ways — as a community member, a writer, a thinker and a journalist. I arrived on campus as a student in 1994, the year the web browser was born; the DePauw liberal arts education prepared me for a world marked by internet-driven technological change and social upheaval.”

Fortt’s first post-graduation job was with the Herald-Leader in Lexington, Ky., where he was assigned to cover technology. He moved to Silicon Valley to work at the San Jose Mercury News, where he covered Apple and Adobe.

He switched to broadcast journalism in 2010, going to work for CNBC. He became co-anchor of “Squawk Alley” in 2014 and has held the same role at “Tech Check” for the past year.

Besides Kauffman, DePauw will award honorary degrees to:

-- Elgan L. Baker Jr,, Class of 1971, a clinical psychologist and co-founder of Meridian Psychological Associates, an honorary doctor of science.

-- William F. Carroll Jr., Class of 1973, an executive and consultant in the chemical and plastics industry, an honorary doctor of science degree.