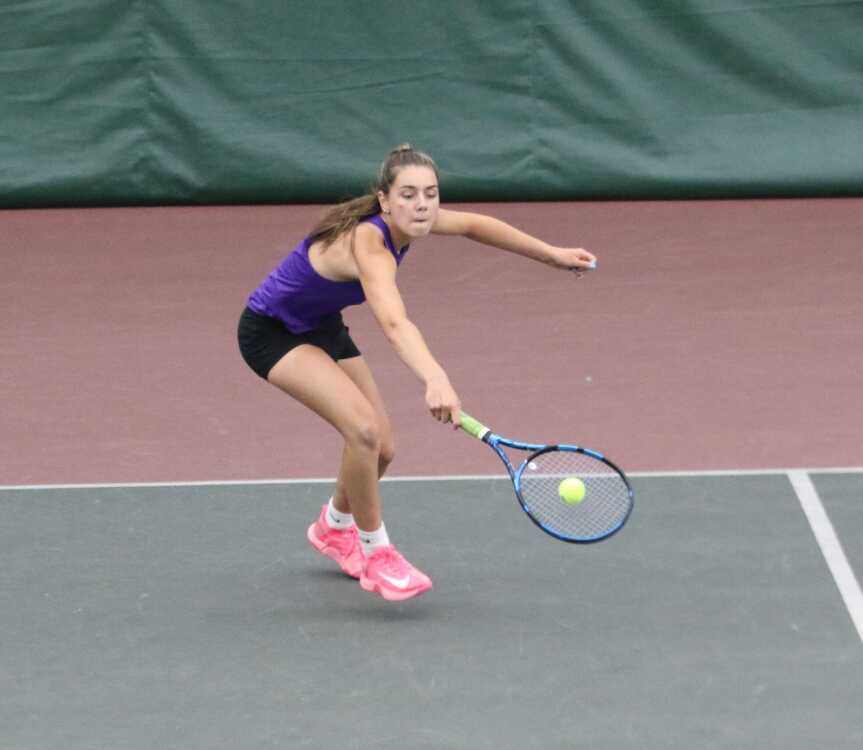 Greencastle's Caroline Gooch reaches out to send a lob to Northview Sydney Maurer during Thursday night's Greencastle Girls' Tennis Sectional semifinal. After winning the first set, Gooch fell into a 4-1 hole before storming back to win the second set and the match 6-3, 6-4, the final point needed in the Tiger Cubs' 3-2 win over the Knights to advance to Friday's sectional final against Owen Valley.
Banner Graphic/TRENT SCOTT

Stormy skies decided to interrupt the IHSAA Greencastle Girls’ Tennis Sectional just as the first match between Owen Valley and South Vermillion was about to get underway, forcing the participants back to the DePauw University Indoor Tennis Center for a second-straight night.

Once the Patriots had taken care of the Wildcats, it was time for a rematch between the hosts and Northview, one that had gone the way of the visitors 3-2 on April 18.

Thursday, the score remained the same at 3-2 but it was the Tiger Cubs that ended the night with a win, advancing to the sectional final at the expense of the Knights.

“The team is more focused now than at any point this season,” Greencastle head coach Annette Munoz said. “I’ve enjoyed seeing their determination at this point of the season because this is the time.

“Every girls steps on that court ready to play and ready to win. Their mentality allows their skills to catch up.

“They are good players who become great players because they’re working harder,” Munoz added. “They want this for the team. They want this sectional bad.”

Maddie Landry opened the scoring for the Tiger Cubs with a 6-0, 6-2 win over Sierra Paul at No. 1 singles.

Crucially for the hosts, Sophie Riggle defeated Martina Sutherland at No. 3 singles 6-3, 6-2, a reversal of the first meeting where Sutherland won in three sets.

“(Maddie) was hitting shots with placement,” Munoz said about her singles winners. “She was determined.

“(Sophie), who lost the first time, had a game plan from the beginning and executed until the end. Her mental focus was outstanding.”

On the doubles’ courts, Brooklee Bussing and Layla Lee swept Liberty Amis and Bella Monnett 6-0, 6-0 at No. 1 doubles to for the Knights’ first point of the match.

Jonna Hyatt and Violet Keith were not far behind, defeating Savannah Black and Addison Fowler 6-1, 6-2 at No. 2 doubles to tie the match at 2-2.

That left the match at No. 2 singles to decide the fate of the two teams, one in which Tiger Cub Caroline Gooch started with a 6-3 first set win over Sydney Maurer.

Maurer bounced back well, taking a 4-1 lead in the second set before what would be the crucial moment in the match.

Trailing 4-2, Gooch held the advantage on multiple occasions but unable to find the finishing touch.

After moving back to deuce on several times, Maurer hit into the net to hand the game to Gooch, who promptly won the next game and broke Maurer in short order to take a 5-4 lead in the set.

Gooch finished with a pair of aces in the final game to close the match out and send Greencastle on to the sectional final.

“I really felt that if (Caroline) could get that game and be down 4-3, she would close it out,” Munoz said about the game at 4-2. “When she talked to coach Landry, she said the next three games were her match and she wasn’t playing a third set.

“She knew what she wanted to do. We knew she was the right person at the right time to finish the match out and her determination was outstanding.”

Greencastle will face Owen Valley in the sectional final Friday afternoon, another match the Tiger Cubs lost 3-2 earlier, though the loss to the Patriots was just a week ago on May 11.

Munoz, however, said the girls were locked in and said they not only understood what needed to be done but had the drive to make another sectional title happen.

“The girls have been really responsible about taking care of themselves match day to match day,” Munoz said. “They prepare mentally, physically and come out ready to play.

“Now, they have a taste of what they could get. It’s going to take a lot for us to lose (Friday). The girls want it that bad.”