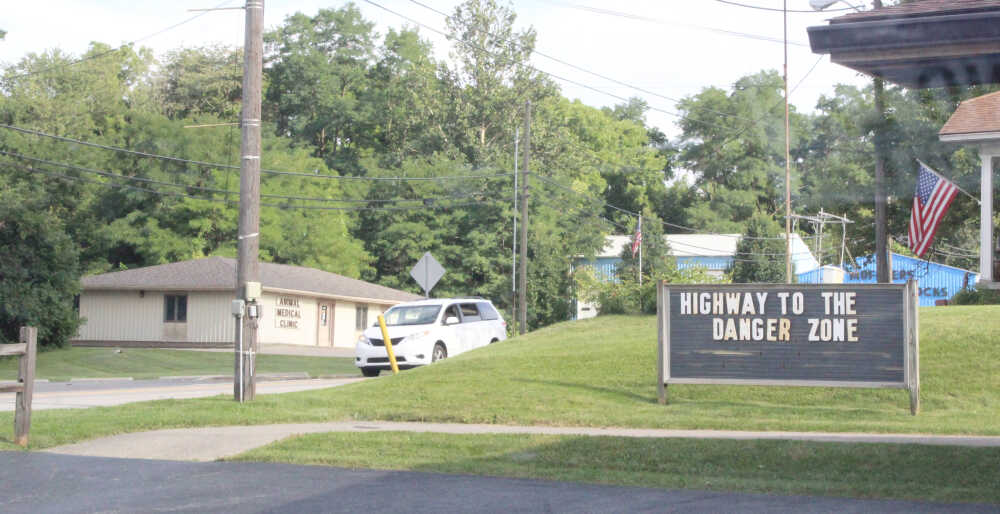 Sign at HumphreysÆ Outdoor Power in Greencastle warns southbound U.S. 231 drivers that they are about to enter the danger zone.
Banner Graphic/ERIC BERNSEE

ōCan you write something about 231?ö a beleaguered Bill Dory asked the other evening after his umpteenth call or comment about the state of the roadway over which he has no jurisdiction.

U.S. 231 is a federal highway that runs right through the heart of Greencastle disguised as North Jackson, Washington and Bloomington streets. It is administered by the state, not the city. And trust me, Mayor Dory wants it fixed just as badly as we do.

Right now Mayor BillÆs got to feel a little like Murray Hamilton as ōthe mayor of Shark Cityö in the film classic ōJaws.ö And the local populace has been squirming in the seats of their cars and pickups for the ride into the ōHighway to the Danger Zoneö as one sign puts it along the 231 route.

Patchwork pavement in front of Neal Tire and Helmer Appraisal makes for a bumpy ride for U.S. 231 traffic in either direction.
Banner Graphic/ERIC BERNSEE

Not that itÆs taking a bite out of business or tourism but itÆs made getting around in general ever so aggravating.

Sure, I could write something about U.S. 231, but IÆve probably written a half-dozen stories about the impending 231 project as the timeline and scope of the work have changed. The latest has bids being returned to INDOT by the middle of this month and work beginning -- youÆre not going to like this -- on the lesser of the two portions (the Bloomington Street from Washington to Veterans Memorial Highway section) soon thereafter.

But thatÆs an understandable strategy since the section through the downtown will be a much more involved project and will likely have to start earlier next year with the city benefiting from INDOTÆs timing to replace the main water main that runs through downtown and was installed sometime before the turn of the century -- the 20th century.

Rather than just write another story about that project, I decided a couple of runs along the route might prove enlightening. So letÆs head south.

Starting at the railroad tracks near the old Monon Grill on the north side, right away it feels like youÆve been sucked into ōMr. ToadÆs Wild Ride,ö about to go off the rails as you head past Furniture Aware-House. That washboard ride continues along in front of the laundromat.

Coincidentally, about the smoothest part of the ride lies in front of the Greencastle Police station. Yet as you approach the Putnam Inn there are bumps and craters that can turn your hubcaps into flying saucers if you dare to do the speed limit.

And rolling past Neal Tire? Be careful you just might leave a muffler in your wake.

That gut-churning bump you get right at the Liberty Street intersection is quite a surprise. Heck, youÆve probably invested a $75 admission fee and 45-minute wait in line at Kings Island for something not much scarier. When my Jeep struck the teeth of that crater, I thought IÆd chipped a tooth. Time to call Dr. Knuth.

The square itself isnÆt so bad. Or maybe you just donÆt notice it with having to watch out for semis making left turns and squeezing through the narrow bottleneck in front of Starbucks and EliÆs Books.

As you march east, you realize itÆs probably a good thing the fair parade got rained out, lest the 4-H Horse and Pony Club throw a shoe along Washington Street or one of the VW Brigade get swallowed up by a pothole.

Found it interesting the other day to watch a guy hauling a mower trailer in front of St. PaulÆs, straddling the centerline to avoid bouncing the empty trailer on rough pavement and damaging the hearing of everyone within earshot.

Residents are already taking defensive measures. Friends of mine are exclusively using North Indiana Street to get through town and avoid the rough pavement, turning onto Shadowlawn and then onto the highway to go north to their Edgelea home.

So, yea, I can write something about 231. Just another bump in the road.