By JOEY BENNETT, For the Banner Graphic 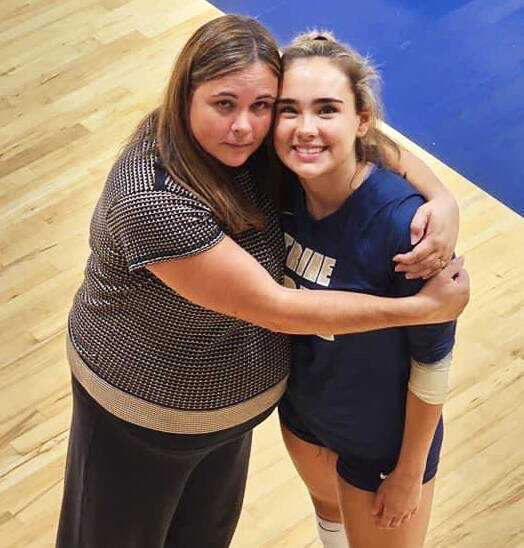 DePauw University volleyball coach Deb Zellers and Trine University freshman Anna Zellers sat on opposite sidelines for the first time when the two teams played Sept. 10, a 3-2 win for the Tigers, with both mother and daughter relishing the opportunity to meet on the court.
Courtesy Photo

Deb and Anna Zellers have shared a life of volleyball.

Deb, the head coach at DePauw University, has coached Anna and has also traveled all over the country watching her play for the Crossroads of America travel program in addition to competing for her Greencastle Tiger Cub squad.

Anna has been one of DePauw’s biggest fans growing up, being a regular attendee as far back as she can remember.

The two had never faced off against each other, though, until Saturday – when Deb’s DePauw squad made the long trip to northeastern Indiana to meet Anna’s Trine Thunder team.

Anna, a freshman setter, did not see action in the match in a rather traditional role for a first-year player.

Still, the event was exciting for her.

“It was very surreal playing against my mom and DePauw,” she said this week. “I grew up watching her coach and I was always DePauw volleyball’s biggest fan. My mom was one of my biggest inspirations in wanting to play college volleyball, and the lessons I have learned from her have helped me to be successful.

“There were so many emotions, but I wouldn’t trade that experience for the world.”

The matchup was also emotional for Deb.

“It was a roller coaster of emotions for me coaching against my daughter’s team,” she said. “First, there’s the sheer excitement of getting to see Anna in the first place. I miss her. Seeing her in passing before the game but not really being able to talk with her felt very strange.

“Then, there was the focus on my own team and all that goes into coaching,” Deb added. “I was wanting to win, of course, but at the same time knowing a win for DePauw meant a loss for Anna’s team. It was a very close five-set match that could have gone either way. DePauw pulled it out and my coaching self was elated. But the mom part of me felt sad for my daughter. It was such a dichotomy of emotions.”

DePauw improved to 5-3 with the win, while the Thunder fell to 3-4. After defeating Defiance on Tuesday, though, Trine reached the .500 mark – winning four of its last five matches since starting the season 0-3.

Anna has been going through the normal issues of playing at a higher level than ever before, but is still enjoying her new lifestyle. She has played in three of Trine’s eight matches, having her best outing against Illinois Tech on Sept. 3 with seven assists and two digs.

“College volleyball has been challenging but I absolutely love it,” she said. “It’s definitely an adjustment with time management, and I’m always busy between class, practice, weights, film or homework.

“Every aspect of the game is more competitive, too,” Anna added. “Practices are more intense, winning games is at a higher stake and everyone wants to be good. I am so fortunate to have found a team and program that I really enjoy playing for and being around. I love it here at Trine!”

While their conflicting volleyball schedules will not allow Deb to see many of Anna’s matches, she is happiest that her daughter is happy.

“As a parent I just want my daughter to have a great college experience,” Deb said. “I want Anna to thrive at Trine academically and athletically. I want her to have fun playing the sport she loves, to build lifelong friendships and to grow along the journey- the same things I want for my players.

“It will be hard for me not seeing Anna play much in college because of my own season,” she added. “I’m glad my husband Todd will be able to see her play. I’m so incredibly proud of Anna. She’s always been such a hard worker and driven competitor. I know good things are in store for her.”

Injuries sideline Rady – Hannah Rady of Cloverdale was prepared for a big senior season with the Anderson Ravens, but an ankle injury that just wouldn’t heal has forced her to end her volleyball career a year early.

In a “Dear Volleyball” post on social media, Rady thanked the game that she has played for the past 12 years.

“I knew I’d have to say good-bye at some point, I just didn’t think it would be this soon,” she wrote. “Although, as stubborn as I am, I know it’s time to let you go. This was and still will be one of the hardest things I’ve ever had to go through.”

Rady said she’s working to focus on getting her ankle healthy enough to run, walk or life freely and without pain – something she hasn’t been able to do in more than a year.

She encouraged her athlete friends to never take for granted what they have, because it could end at any moment like it did for her.

“I would do absolutely anything to play again, but this situation is now out of my control,” she said. “I am working on fully surrendering it to God and letting his peace, healing and comfort take control.”

Rady will graduate in May with a public relations degree.

Help needed – The “College Report” will appear once a month during the school year, and will initially require some help from administrators and readers to make sure every athlete competing in college has been located and added to the working list below.

There are undoubtedly some omissions. Please send any additions or corrections to jbblkc@gmail.com, including any for upcoming winter and spring sports seasons.