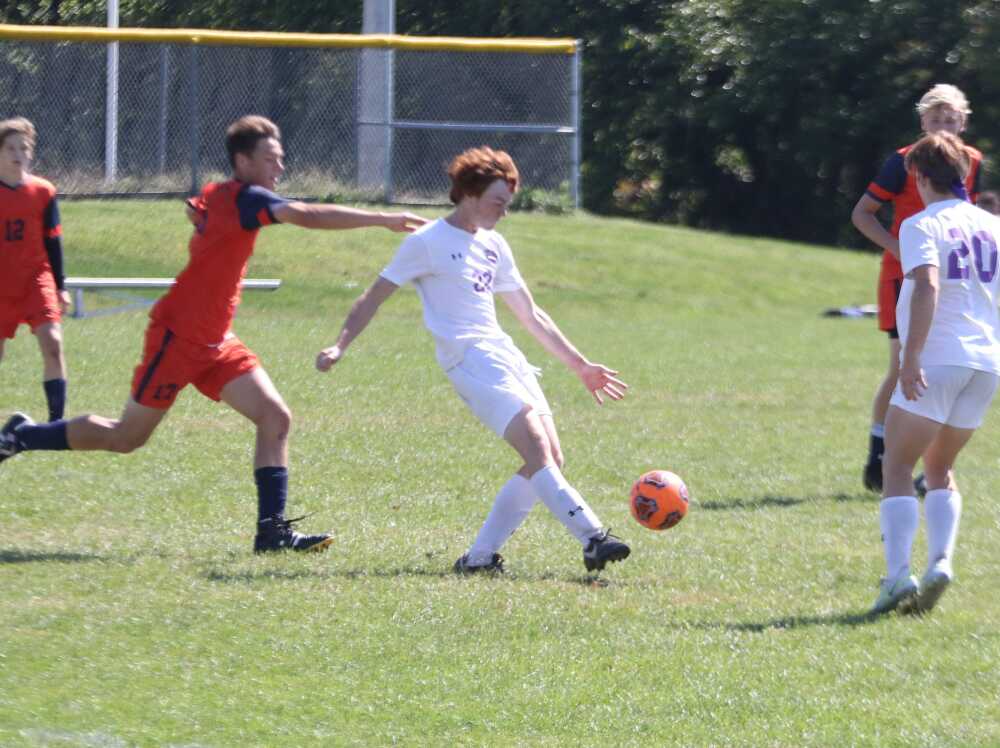 Greencastle and North Putnam entered the match unbeaten in conference play but only one team could still make that claim by the end of the match.

It would be the Tiger Cubs who would make a claim for their second-straight conference title, taking a 2-1 lead into halftime before adding a trio of goals for a 5-1 win.

Being a county match on top of having WIC ramifications meant both sides came out flying at one another with time on the ball often at a premium.

The visitors had more possession to start the match, looking to take the ball wide and pressure with crosses and set pieces while the home side looked to move into the attacking third as quickly as possible with quick passing combos.

It was fitting, with constant turnovers and little time on the ball, that the opening goal came route one as Harris Weltz’s goal kick was headed on by Seth Kallem into the path of Micah Foss, who eased a shot past Michael Ali for a 1-0 lead 11 minutes in.

The match took a strange turn a few near the midway point of the half when the linesman on the far side was tripped up by the ball following a clearance, requiring medical attention and eventually leaving for further treatment, forcing the match to be called by the two remaining officials.

Play resumed after a delay with Greencastle peppering Ali’s goal with shots before both keepers had rushes of blood to the head.

A ball over the top saw Ali attempt at first to grab then sweep the ball away, doing neither as Boyd Ensley ended up with the ball, forcing the Cougar keeper to backpedal and leap to catch Ensley’s attempted cross.

Immediately after the catch, Ali sent the ball up field to Brayden Neureiter, who beat one man before splitting the Greencastle defense with a pass that Weltz and Matt Farrington went for.

The latter won the foot race, rounding past a suddenly stranded Weltz and slotting home to level the match at 1-1.

The match continued at its frenetic pace with the Tiger Cubs still having the better opportunities and eventually getting a second goal with seven minutes left in the half.

Foss sent in a deep corner from the right side with Kallem, who had peeled off his marker, heading a looping ball back across goal that left Ali no chance as it nestled inside the far post to restore the visitors’ lead.

Greencastle’s offensive pressure continued into the second half with Kallem and Foss both missing from close range while Neureiter skied a shot from inside the box in reply.

Eventually the pressure told as Foss jinked down the right wing 16 minutes in, sending a tantalizing cross all the way through the Cougar goal mouth that Ensley collected and slid into the path of Kallem for the latter to slam home, doubling the lead to 3-1.

Thirty seconds later, Greencastle had a fourth after a foul and yellow card for North Putnam’s Brady Barber.

Kallem sent the ensuing free kick to Ali, who was unable to claim it and among a pack of Tiger Cubs zeroing in on goal, Foss was first to reach the ball and strike to extend the lead.

Kallem would get the hat trick after a free kick from Weltz ended up at the field of Foss, whose shot was not collected cleanly by Ali with the Greencastle senior on hand to pounce on the loose ball.

North Putnam would get a chance to add to their own tally after Nolan Hackleman was wiped out in the box.

Neureiter stepped up to take the penalty but slammed his effort off the bar and away, the last major action before the final whistle.