It was the year of the Cougar.

North Putnam senior Jake Mullis raked up some impressive numbers as he led the Cougars to their semistate appearance after capturing the sectional and regional titles. 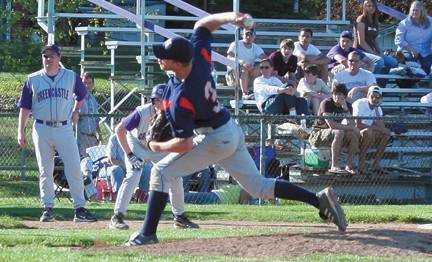 2007 Putnam County Player of the Year Jake Mullis delivers a pitch in North Putnam's season-opening win over Greencastle. Mullis led the Cougars to the semistate finals, going 14-0 with a 0.45 ERA.

Mullis batted .401 in 107 plate appearances and recorded a 0.45 ERA and going 14-0 on the season to power the Cougars. He also captured school records for career batting average and career strikeouts, therefore he has been named the 2006-2007 BannerGraphic Player of the Year.

Mullis seemed to only build steam as the season wore on as he one-hit Triton Central in their regional contest at home and then dominated Wapahani in the first game of semistate.

B. Dahlstrom -- The NPHS senior showed some impressive power as the season wore on and lead the county in home runs with seven. With his 24 RBI, 26 runs scored and 14 stolen bases, Dahlstrom was a definite tone setter for the Cougars. Dahlstrom was also a presence on the mound, throwing a no-hitter in the second game of sectional play.

Berry -- A staple behind the plate for the Cougars, Berry lead the county in batting average with a .427 average and racked up seven doubles, three triples and two homers, along with 30 RBI. In 103 plate appearances, Berry collected 44 hits and scored 42 runs.

Rooker -- Hampered all season by an elbow injury, Rooker pushed through and batted .396 with six home runs, giving him the school record for home runs in a career as a junior. His 37 RBI ranked him second on the team.

G. Dahlstrom -- The Cougar sophomore flexed some muscle at the plate and a solid glove at first for the Cougars throughout the season. His six home runs was tied for second most on the team, and his 40 RBI lead the team. His .369 batting average, eight doubles and .673 slugging percentage ranked among the top on the team.

Alcorn -- The Cougars were looking for a second baseman and they found it in Alcorn. In addition to anchoring the right side of the infield, Alcorn batted .329 with 22 RBI and 25 runs scored. He also proved to be a threat after reaching base, as he stole 21 bases.

The Tiger Cubs ended their season with a record of 16-7, falling to Edgewood in the second game of the Owen Valley sectional. Greencastle has four players on the All-County squad. Seniors Erick Burgeson, Derrik Patterson and Zac Remsburg, along with junior catcher Kendall Faust rounded out the GHS selectees.

Burgeson -- This GHS senior batted .365 on the season with eight doubles, three triples and two home runs, while collecting 15 RBI. Burgeson also saw 36 innings of action on the mound, recording 50 strikeouts on his way to five wins.

Patterson -- In 80 trips to the plate, Patterson amassed six doubles, two triples and one home run and batted .313. On mound, he struck out 58 batters and recorded a 2.78 ERA in 60 innings pitched.

Remsburg -- Remsburg was a powerhouse for the Tiger Cubs this season, knocking out five homers along with seven doubles and a triple. His 22 RBI lead the team and his .366 batting average was second on the team. His .659 slugging percentage led the team.

Faust -- The Tiger Cub catcher led the team with a .375 batting average and was second on the team with 21 RBI. He also had six doubles, one triple and one home run. Faust was also perfect on stolen bases, stealing 12 in as many opportunities.

The Cloverdale Clovers seemed to struggle early in an effort to find its way in the 06-07 season, but the standout play of senior Cody Nees and sophomore Josh Flory helped turn its fortunes around.

C. Nees -- Batting .390, Nees led the Clovers at the plate, crashing 6 homers and collected 21 RBI. His .500 on base percentage was top on the team and he recorded seven stolen bases.

Flory -- Flory split time between shortstop and pitching to help pace the Clovers. He batted .348, with 24 hits and six doubles. His .423 on base percentage was second on the team.

The South Putnam Eagles fell to North in the final game of the Cascade sectional, but saw big strides as a young team played solid through the second half of the season. Senior Adam Nees and sophomore Noah Boswell were chosen to represent the South Putnam Eagles. Nees and Boswell were selected due to their standout play throughout the season, unfortunately no stats were provided to the BannerGraphic from the South coaching staff.

A. Nees -- Nees was the Eagles' ace on the mound and at the plate during the season. Nees helped lead the Eagles over Monrovia and Cloverdale to reach the sectional final. In the first game of sectional, Nees threw for five strikeouts and one hit against Monrovia.