INDIANAPOLIS -- When Kevin Harvick passed Tony Stewart on a lap 140 restart, it looked like it could be the race. The story seems to be the same every year at the All State 400 at the Brickyard -- if a car gets the lead, it tends to keep it. 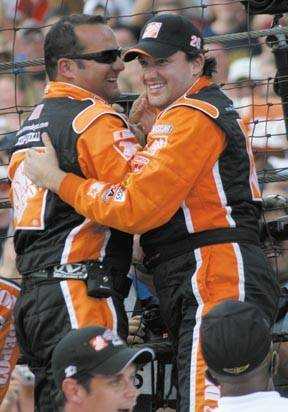 Stewart enjoys a moment with crew chief Greg Zipadelli after his win. This marks the duo's second win in three years at the Brickyard.

But the Columbus, Ind., native had other plans for Harvick. Ten laps later, he took some of Harvick's paint before taking the lead. It was a lead he would hold, as he claimed his second win at the Indianapolis Motor Speedway.

While there was some contact on the exchange, Stewart had nothing but good things to say about his friend and competitor after the race.

"That's a hard guy to race with (Harvick). He's a clean guy. He's one of my best friends, and I can't think of another guy I'd want to race with for the lead," Stewart said.

And Stewart was having fun as he raced for the lead and ultimately took it. He could be heard on the radio with his crew saying "Here, kitty, kitty," as he attempted to reel in Harvick.

Upon completing the pass, he showed the nerves of a champion, taking both hands off the wheel to take a drink of water as he drove away.

With the lead in hand, Stewart once again exerted the dominance he had shown all day. He was the lap leader, leading seven times for 65 laps.

Besides this, Stewart had one of the best passing cars on the track when he wasn't in the lead.

"This thing was pretty good in traffic all day," Stewart said.

"We were the only guy who could stay with anybody who was leading."

With the race over and a second Indianapolis victory in hand, Stewart made his obligatory fence climb before kissing the bricks. Afterward, he dedicated it all to his fans.

"This for all my fans in the stand that take all the bull(crap) from everyone else," Stewart said.

Unfortunately for Harvick, the lead wasn't the only thing that would slip from his grasp. After Stewart pulled away, Harvick lost positions to Juan Pablo Montoya, Jeff Gordon, Kyle Busch, Reed Sorenson and Mark Martin. The car was tight in the closing laps, a condition which perhaps came from the contact with Stewart.

"It was good racing until I got the left front fender caved in. He (Stewart) didn't give us enough room," Harvick said.

The second-finishing Montoya became the first driver to race at Indianapolis in three series, and he fell just one position short of becoming the first to win in two series. The Colombian, who won the 1999 Indianapolis 500 in his first attempt, was not disappointed with the outcome.

"It was a lot of fun. My Texaco Havoline Dodge was amazing," Montoya said. "I don't think anyone had anything for Tony. His car was way too fast.

"Second here at the Brickyard, it was awesome."

The rest of the top ten were Martin, Harvick, Jeff Burton, Dave Blaney and Matt Kenseth.

Martin, who was sent to the back of the field for speeding on lap 62, was proud of his U.S. Army-sponsored team and the comeback it made for the sixth-place finish.

"We had to fight back from some adversity, and I am really pleased with the finish today," he said. "We were like our soldiers -- we never quit and completed the mission."

A couple of notables with disappointing days were Jimmie Johnson and Dale Earnhardt Jr.

Defending race and series champion Johnson continued his recent free fall, getting involved in a couple of incidents. After a lap 45 incident with a number of other drivers, he got back on the track before cutting a tire on lap 62. The car struck the SAFER barrier in turn 3 and slid along the wall in the short chute before bursting into flames. Johnson quickly got out of the car, narrowly missing serious burns and even getting his eyelashes singed.

"Everybody's trying hard because track position's so important, but everybody's forgetting how aero-sensiteive these cars are side-by-side on corner entry," Johnson said. "It's just really tough running side-by-side and being aggressive at this track."

The first 100 laps of the race were marked by much of the problems of which Johnson spoke. Forty of the first 98 laps were under caution. This all added up to a 117.4 mph average speed -- the second-slowest in event history.

However, the closing 60 laps were much cleaner, featuring only one caution and perhaps the best racing NASCAR has seen in its 14 years at the Brickyard.

Unfortunately for Earnhardt, the one caution was his. After showing a car similar to Stewart's early (he led twice for 33 laps), he fell out of the top 10 after a caution. Although he slowly climbed back as high as fourth, his engine went on lap 137. He finished 34th.

"It was a good car. It led some laps. We were just a little bit off," Earnhardt said. "This track is so aero-dependent. It is so tough -- even in fifth place you get tight."

But the day was Stewart's. Recalling his emotional 2005 win at the Brickyard, he was unable to rank the two in importance.

"It's still like a dream. Both races were special. Neither one outweighs the other," he said.